Breaking Down The Dallas Cowboys Defense

Share All sharing options for: Breaking Down The Dallas Cowboys Defense

Some of the information I am about to share comes from this post over at DC Times. I also used my post from SideLion Report about the Cowboys defense from last season.

In three days’ time, the fourth-ranked Detroit Lions offense will take on the 17th-ranked Dallas Cowboys defense. In the recent past, the Cowboys defense was coached by defensive-minded head coach Wade Phillips, while the offense was in the hands of Jason Garrett. After the firing of Phillips last season, though, things have changed quite a bit. Out went Paul Pasqualoni, the interim defensive coordinator, and in came Rob Ryan, the twin brother of Rex Ryan.

In Rob Ryan, the Cowboys have one of the most underrated defensive gurus in the league. Even though his coaching resume isn’t long or spectacular, he has turned plenty of teams with very little talent into decent defenses. Take the Cleveland Browns, who Ryan was the defensive coordinator for last season. You would think that a team that traded away their best pass rusher in Kamerion Wimbley the season before would falter quite a bit, especially in the 3-4. Yet, Rob Ryan managed to get that Cleveland Browns defense (which was also starting two rookies in the secondary) into a tie for 13th in the NFL in defensive scoring.

This trend pretty much continues everywhere he goes. In his early days, he turned Oklahoma State’s defense from a no-name defense to a powerhouse in the late 90s. He helped Aeneas Williams earn his first two trips to the Pro Bowl in 1994 and 1995 with the Cardinals. He also helped turn the Patriots linebackers into the beasts they were back in the early 2000s when he coached there from 2000-2003.

It should come as no surprise that Rob Ryan has had success at both professional and collegiate levels knowing that he learned the schemes and techniques from his father, Buddy Ryan, who was one of the greatest defensive coordinators in NFL history. Thus, his scheme is also very similar to what the Jets run right now under Rex Ryan. It is principally a 3-4 zone blitzing scheme that mixes in plenty of the old 46 defense that Buddy Ryan used to run with the Bears. It also utilizes multiple fronts to try to confuse offenses about who is going to blitz and who isn’t.

While with Cleveland last season, Rob Ryan’s defense had some interesting results. For one, they didn’t give up a ton of points to any team, except the Pittsburgh Steelers, which scored 28 and 41 points in the two matchups. Those two point totals were the highest allowed by the Browns defense. On the other hand, the same defense somehow managed to hold the Saints offense to 14 points and Drew Brees to 37-of-56 passing for 356 yards, two touchdowns and four interceptions. The same defense also held the New England Patriots to 14 points and Tom Brady to just 19-of-36 passing for 224 yards and two touchdowns.

It is then safe to say that Rob Ryan can do quite a bit with all of the talent that the Cowboys have on the defensive side of the ball. For one, he has one of the most versatile and feared outside linebackers in the league in DeMarcus Ware. He also gets to work with former All-Pro nose tackle Jay Ratliff and a pretty decent front three in general. While the Cowboys secondary is definitely a work in progress, I do think they have enough talent to match up fairly well with the Lions passing options.

Now, there isn’t a whole lot of tape or information on what Rob Ryan is doing with the Cowboys defense so far, but this post from DC Times did a great job taking a look at the Browns defense from last season. Most of the information I am about to share comes straight from there, so you can take a look at that post also.

For starters, take a look at the diagram below; it shows the Browns defense in a 46 formation, which basically means that there are six defensive linemen (four actual linemen and two linebackers) and the strong safety basically comes down and acts like a linebacker. If you’re curious, the named of this formation is derived from the jersey number of Bears strong safety Doug Plank, who used to act as the linebacker for Buddy Ryan.

Both the Browns and the Jets used this type of a look quite often. While Rob Ryan used it primarily as a short yardage, run stopping formation, Rex used it to come up with the crazy blitzes that the Jets like to bring. With the Cowboys, I expect this formation to be primarily a run stopping formation. The Jets can use a formation like this to blitz only because they can afford leaving Antonio Cromartie and Darrelle Revis in man coverage; the same can’t be said for the Cowboys and their corners.

The other unique formation that Rob Ryan used last season with the Browns was a two down linemen nickel/dime package. In this formation (shown below), there are two down lineman, three linebackers, and six defensive backs playing cover two. Knowing the Lions tendency to go on a spread formation like the Bucs are in the picture, I would think that the Lions will see similar formations throughout the day. I also wouldn’t expect too much of the 46 knowing that the Lions aren’t going to run the ball much, even in short-yardage situations. 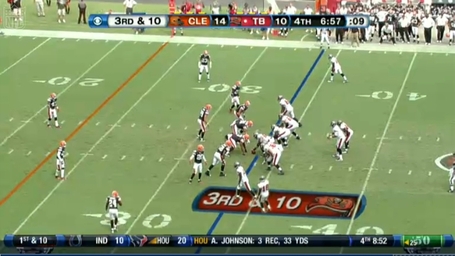 All in all, I think the Dallas Cowboys defense deserves quite a bit of respect. They have talented, proven players and a very good defensive coordinator. The Lions have a near elite offense, but I believe this will be the best defense they have faced so far, so it will be quite interesting to see how they perform, especially on the road. Overall, I expect a solid effort from the Lions offense, but I don’t think they are scoring more than 24 points on this defense.