As mentioned in yesterday's notes post, Nike is debuting some new NFL equipment at the 2012 Pro Bowl on Sunday. The main focus of the equipment is on the gloves that some players will be wearing. Specifically, they are Nike's "Vapor Jet Gloves." They feature logos for each team that are formed when a player puts his hands together.

A few of the gloves had leaked out in the past few days, and today Nike released photos for all 32 teams, including the Lions. 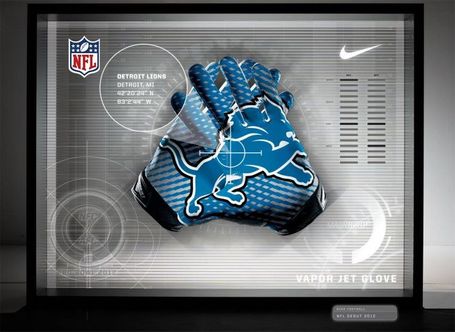 When Nike officially takes over for Reebok as the apparel supplier of the NFL, expect there to be more things like the gloves released. Several of the concepts from Nike's Pro Combat uniforms for college football are expected to be brought to the NFL, and in general there will likely be a lot more innovation for the uniforms.

I haven't ever been a huge fan of Nike in part because they feel the need to change uniforms so often, but considering how uninspiring of a job Reebok has done with the NFL, I think it will be a welcomed change.