This week, instead of reliving the baffling regular-season finale that was the Packers game, I've decided to look forward to the Saints by looking back at the Lions' previous matchup with them. When I first analyzed the game, I focused on the game Nick Fairley had. This time around, I want to focus on what the Lions did well and what they'll need to improve upon to come away with a victory this time around.

Though the final score of the game was a decisive 31-17, the game was very much up for grabs in the final quarter. With 13 minutes left in the game, the Lions had the ball at the Saints' 35-yard line only down by seven (they would eventually miss a long field goal, giving the Saints a short field). Though the stat line looks ugly, the Lions defense actually did a good job limiting the Saints offense. The Saints are averaging 41.1 points per game at home, so holding them to 31 points was actually a pretty big accomplishment. Here's how the Lions hung with the Saints.

1. Good Coverage:
It may seem weird to say that the Lions coverage was good on a day that Drew Brees went 26-of-36 for 342 yards and 3 TDs, but upon re-watching the game, it's absolutely true. Even on some of Brees' biggest completions, the coverage was absolutely solid.
Here's the situation: The Saints have third-and-four at the Lions' 43-yard line. A stop would mean holding the Saints scoreless on their first two drives of the game. A conversion would likely mean at least a field goal. Brees targeted tight end Jimmy Graham, who was in man coverage against Eric Wright. Wright does everything he possibly can to break up this pass:

But Graham is a beast and the pass is perfect. Later in the game, the Lions tried to cover Graham with both safeties. But Chris Harris and Amari Spievey struggled a lot more than Wright.
Another great example of good coverage beaten by a perfect throw came on another third down. It was the first play of the second quarter, and the Lions had an opportunity to force the Saints three-and-out and get good field position. This time, Aaron Berry was victimized. 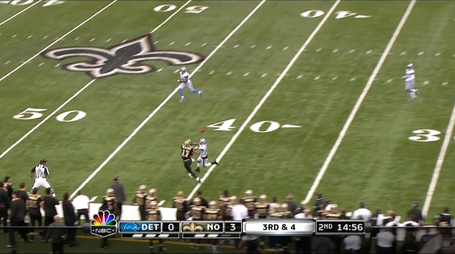 It's worth noting that this is a pass nearly 30 yards downfield. To fit this pass into that tiny window is absolutely incredible. Although he didn't get his head around, it's hard to fault Berry on this play. It was a brilliant throw from a great quarterback.

But sometimes the Lions' tight coverage actually resulted in a good play for them! Again, let's look at another third down. The Saints were threatening to score and the Lions needed to hold them to a field goal. The Saints were in a difficult situation at third-and-11 deep in the Lions territory, but Brees has shown he can certainly convert on third-and-long. Brees eyes Lance Moore, but he's bracketed perfectly by Wright and Berry. 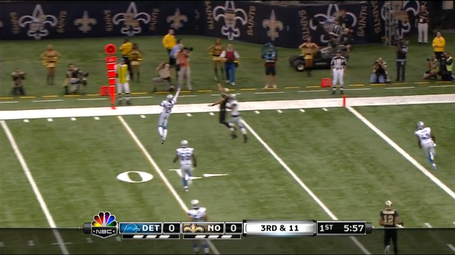 That window is so small that even Brees can't fit the ball in there. The Saints have to settle for three and the Lions remain very much in the game early.

If you want further proof that the Lions coverage was solid, wide receivers only accounted for 11 catches on the day. If you take away the long bomb to Robert Meachem (which was blown coverage by Harris, as you'll see later), wide receivers only accounted for 129 yards. Brees was forced to check down to his running backs (seven catches for 57 yards) and his tight ends ... well, tight end. Graham alone caught eight passes for 88 yards.

As a result of all of these checkdowns, the Saints found themselves in a lot of third downs. In the first quarter alone (perhaps the Lions' most successful defensive quarter), the Lions forced five third downs. Overall, the Saints faced 12 third downs (converting six of them). The more third downs you force, the more chances your defense has to get off the field.

Again, this may seem strange to say given that the Lions only scored 17 points on the day, but they could have easily put up at least 30 that night. As we all know, penalties hurt the Lions' chances often in this game. In total, the Lions racked up 11 penalties for 107 yards. One particular harmful penalty occurred on the Lions' first drive of the second half. They were all the way down to the Saints' three-yard line on a third-and-one when Titus Young got an inexcusable personal foul penalty, forcing a third-and-long that the Lions failed to convert. If those three points would've been seven and the Lions' field goal isn't blocked at the end of the first half, the Lions would have headed into the third quarter tied with the Saints.

Overall, the Lions offense absolutely killed it against the Saints. The Lions outgained the Saints (466 to 438), had zero three-and-outs, and only had one turnover (and it came at a point when the game may have been over anyway). Even the running game was effective, netting 4.0 a carry. If it weren't for penalties and untimely miscues (i.e. the dropped screen pass, slight overthrows), the Lions would have turned all that yardage into points. Matthew Stafford played one of his best games, completing 70.5% of his passes for 408 yards and a 97.5 passer rating. Take away his late interception (which was a desperation fourth down throw) and his passer rating jumps to 109.4. 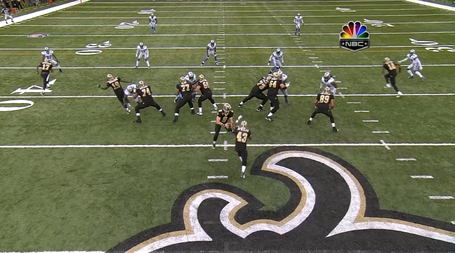 Even with Ndamukong Suh out via suspension and Fairley out with his injury, the Saints double teamed both defensive tackles on this play. Neither Corey Williams nor Andre Fluellen can deal with the double team, and the defensive ends on this play -- Willie Young and Keyunta Dawson (?!?) -- can't beat their respective man.

Though coverage was mostly good in this game, when it wasn't, it was the result of the backups. On the Saints' biggest play of the night, Harris blew his responsibility and made Wright look like a fool. 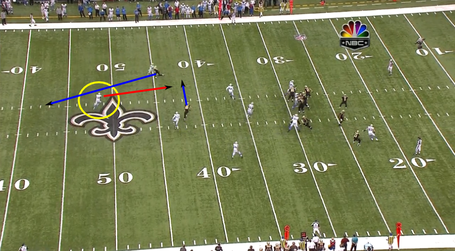 Harris is the deep safety (who Cris Collinsworth incorrectly labels as Spievey). Harris tries to read Brees' eyes and jump the underneath crossing route. As you can see, Berry is giving the receiver the inside of the field, expecting help from Harris. When Harris leaves his spot on the field ... 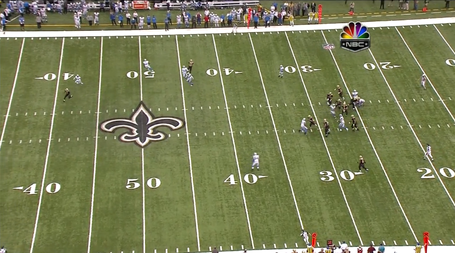 Disaster. It'll be interesting to see how the Lions will fare with Louis Delmas and Spievey playing the two safety spots, but it's hard to imagine a misread like this happening again.

Overall, rewatching this game was a positive experience. The Lions defense looked decent, the offense was able to move the ball consistently and they were in this game until the very end. If the Lions can get good play from their healing starters, eliminate the penalties and convert on the chances they are given, they absolutely have the capability to defeat the Saints on Saturday. NFL Network is replaying this game at 8 p.m. tonight. I suggest you watch and see for yourself.