Aaron Berry Apologizes For Tweet After Loss To Saints

Following a rough game, the last place an athlete should probably be is on Twitter. Fair or not, people don't hold back when it comes to criticizing athletes, and that was especially true for fans that watched the Detroit Lions' loss to the New Orleans Saints. A lot of criticism went in the direction of Detroit's secondary, and Aaron Berry was actually trending on Twitter during the game. I think you can figure out what most of the tweets said.

After the game was over, Berry got on Twitter and blasted those who were criticizing him by tweeting this:

I don't think I need to explain the shortsightedness displayed by tweeting something like that. As Al said over at The Wayne Fontes Experience, don't tweet when you're angry. That is especially true if you're an athlete. While some of the tweets directed at Berry were beyond unnecessary, athletes have to have thicker skin, and the tweet above was just as unnecessary.

Berry did quickly realize his mistake and apologized for his original tweet, which has since been deleted. 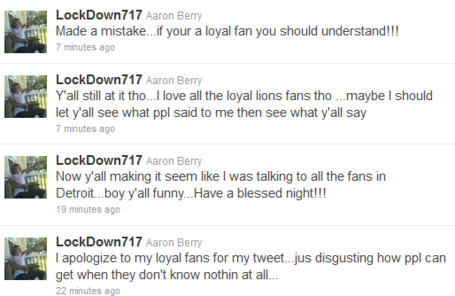 I'm going to chalk this up to a frustrated player letting his anger get the best of him, but I don't think there's any doubt Berry lost a lot of fans tonight, and not because of his play on the field.