One key to Sunday's game against the Philadelphia Eagles will be pressuring and sacking Michael Vick. A look back at the Eagles' matchup with the Giants exposes a key weakness.

Since the Detroit Lions are coming off their bye week, I decided to take the video review column in a different direction this week. Instead of looking at things through the Lions' point of view, let's take a look at the Philadelphia Eagles this year and how they've responded to blitzes.

I chose to examine the New York Giants game because their defense most resembles Detroit's. The Giants bolster a strong defensive line that occasionally even lines up in the "wide-nine" technique that the Lions often use (get ready to hear that term all weekend). In reviewing the film, I noticed a common way the Giants blitzed and effectively disguised their pass rushers.

On the first play, the Giants are showing a blitz by both linebackers up the "A" gap (space between the center and the guards). But notice the safety slowly creeping into the play: 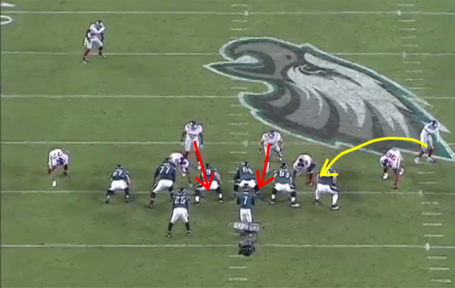 The safety is cleverly facing the receivers. This causes the offensive line to not even consider him as a blitzer. But at the snap ... 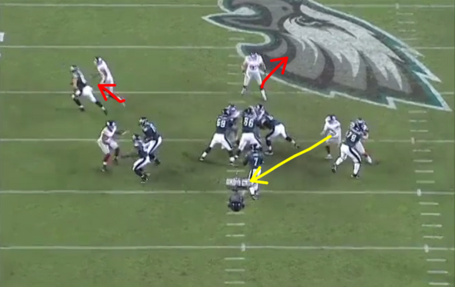 ... the linebackers drop back into the coverage, and the safety has a free lane to Vick. Unfortunately for the Giants, Vick is staring right in the direction of the blitz and is able to get rid of the ball before the defender can get there. Still, the Giants were effective here, forcing a quick pass (though it was complete) while also getting a free shot at Vick.

Later in the game, we see the exact same blitz from the other side: 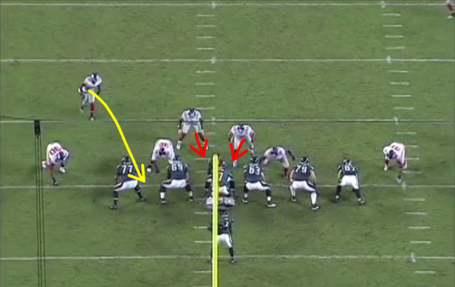 Again, we see the linebackers showing blitz, while the safety creeps in late. How do the Eagles react this time? 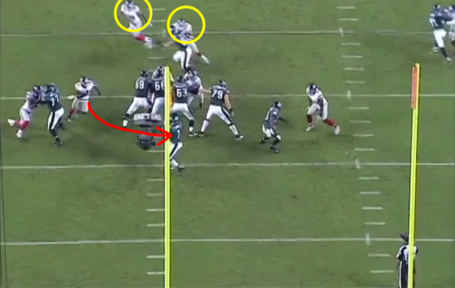 No differently. The safety has free reign once again, and this time Vick is not looking short. This is the perfect play call for the Giants and should result in creamed-Vick. 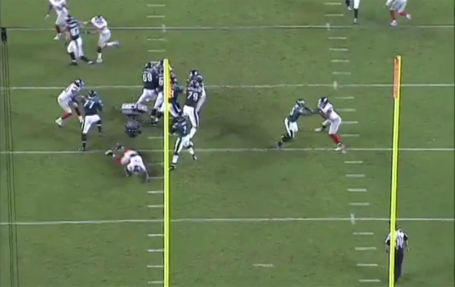 Unless Vick deploys the Mario Kart banana peel defense. In reality, the safety happens to trip on the offensive lineman's foot. Rather than destroying Vick, he embarrassingly faceplants, and Vick has enough time to connect on a big play.

Of course, this blitz couldn't possibly work all of the time. The Giants would eventually have to blitz these linebackers for the disguise to be fully effective. And indeed they did: 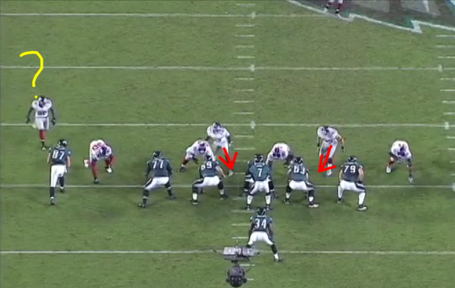 Stop me if you've heard this before: two linebackers showing an inside blitz with a safety creeping closer. So what's coming? What should the Eagles' offensive line do? 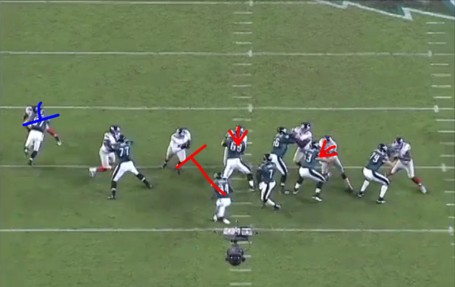 Both blitzing linebackers are actually picked up by the linemen nicely, while the safety is in coverage on the tight end. However, now a defensive tackle is running free with only a mismatched running back in his way. 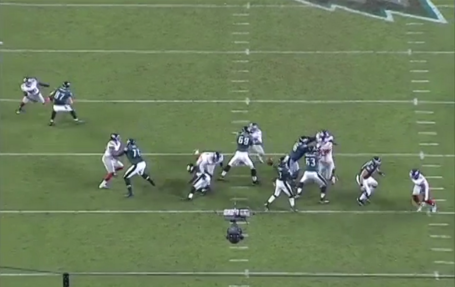 But the back does an excellent job upending the defensive tackle and every pass-rusher is accounted for. But even blitzes that are picked up can sometimes be successful. Take a look at the blitzing linebacker on the right. He has effectively pushed the guard well into the backfield and is right in Vick's face as he's passing the ball. The blitz, while failing to produce an unblocked rusher, made Vick feel like the pocket was enclosing quickly. He releases the ball sooner than he'd like, and because of the defender in his face, the pass is inaccurate and falls incomplete.

So what does this mean for the Lions? Well, when the opponent is blitzing a defensive back, we see that the Eagles are prone to giving up a free pass rusher. However, a free shot at Vick does not necessarily equate to a sack. Both plays when the safety had a free shot, he failed to pick up the sack, and Vick made them pay. And in neither case was Vick's elusiveness displayed. So, in the words of The Wire, "You come at the king, you best not miss."

Enter: Louis Delmas. After missing the first four games, Delmas looks to be on pace to return this week. And the timing could not be any better. (Well, I guess if he came back five weeks ago, that would've been better.) Delmas is no stranger to hitting Vick. His instincts and solid tackling make him the perfect candidate to blitz Vick early and often. I expect to see Delmas in the box for much of the game, and if he's not blitzing Vick, he'll be shadowing him.