Pride Of Detroit looks at how small mistakes can make a big difference in the flow and outcome of a football game.

In my previous article, I talked about the Detroit Lions' struggles with the fundamental things that a football player has to do in order to be successful. In the game against the Philadelphia Eagles, the Lions demonstrated that perfectly from the very first snap on offense.

The play started from the Lions' 20-yard line after a touchback on the opening kickoff. The call was a screen pass to the right side of the field. This was a very good play call. There is probably no more appropriate place to take advantage of an overly aggressive defense than on the very first play of the game. The players have a lot of pent up energy waiting to be released after waiting for the game to start. All you need to take advantage of that situation is to execute a screen pass. We will use snapshots of the game broadcast to illustrate what went wrong for the Lions. 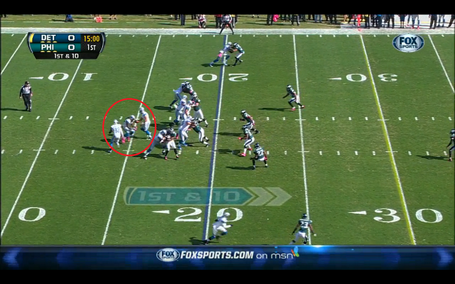 In this snapshot you can see Matthew Stafford has taken the snap and turned around to fake a handoff to Mikel Leshoure. Stafford also fakes an end-around to Nate Burleson on this play. That fake has been set up by running the end-around to Burleson on the first play in previous games, so it has been on film for other teams to see. Let's move a little farther into the play to see how it develops. 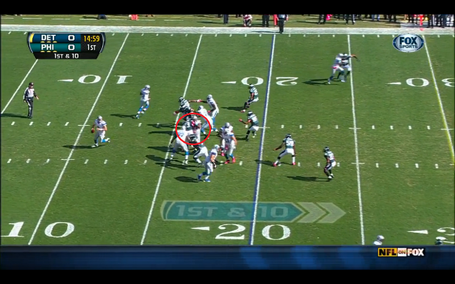 In this snapshot you see that Eagles defensive end Jason Babin plays off a block of Gosder Cherilus to engage and tackle Leshoure. Normally it would be considered a holding penalty if a defensive player tackles an eligible receiver, but the earlier play fake to Leshoure changes that. Here is the NFL rule that applies in this case:

Any offensive player who pretends to possess the ball or to whom a teammate pretends to give the ball may be tackled provided he is crossing his scrimmage line between the ends of a normal tight offensive line.

If the play is designed for Leshoure to cross the line of scrimmage inside of the tackles, then Gosder Cherilus is the one that blew this play when he was unable to maintain his block on Babin. Since this is a screen pass, some of the linemen will release their blocks to allow the defensive linemen to rush after Matthew Stafford and overrun the play. It is possible that Cherilus was supposed to do that. Let's look at one more snapshot. 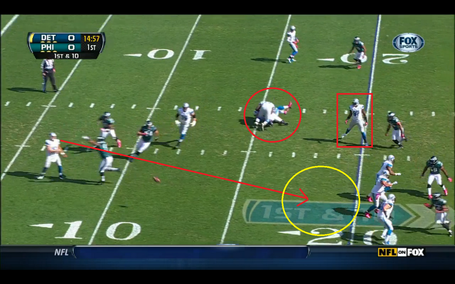 Now we get to see the critical moment of the play. Three Eagles are closing on Stafford as they should be on a screen pass. Jeff Backus is just behind the three players rushing Stafford to provide backside blocking for the screen pass. You can also see the three offensive linemen that are just across the line of scrimmage to provide the screen. All of that was executed perfectly.

The red circle near the center of the screen shows Cherilus deciding to fall on top of Leshoure and Babin rather than releasing to become part of the screen. That may lead us to believe that Cherilus made a mistake on this play by not maintaining his block, but you would probably be wrong in that assumption.

You can clearly see that Stafford is looking in the direction of the red arrow for his receiver. If Leshoure were the intended receiver, this play design is flawed. It would take much too long for Leshoure to run between the tackles and then break back outside for the pass. The timing of the play simply wouldn't work. There is a small possibility that Leshoure was supposed to break his route outside immediately after the play-action fake, but that also makes no sense because it would defeat the purpose of the fake to begin with. As it stands, the play action was successful in getting Babin to bite on the fake and tackle Leshoure, which takes him entirely out of the play. Cherilus is just falling on Babin to make sure he cannot get back up in time to do anything useful because Babin is his assignment. Cherilus is finishing the play.

The intended receiver should be in the area of the yellow circle near the bottom of the snapshot. You can see Pettigrew inside the red rectangle. He is looking back at the play as though he is expecting a pass. That is the smoking gun that shows Pettigrew was supposed to get this pass. The problem is that Pettigrew is in the wrong place. He is playing it as a middle screen when it is in fact a screen to the right. Since there is no receiver in the proper position, Stafford is forced to throw the ball away.

If this play would have connected the Lions would have had a very good chance for a big play. The screen developed very well. If Pettigrew were in the right place, he would have had four blockers in front of him, because there was also a wide receiver farther downfield. All that would have been required for big play is for the three linemen in the screen to take out the two linebackers that were close enough to stop Pettigrew for a shot gain. At that point the deep safety and cornerback would have been the only players in front of Pettigrew, and there is one lineman and the wide receiver available to block them.

One small thing blew this play up. The receiver was in the wrong place. It was a mental mistake that turned a play that had the potential to gain a lot of yards, or even score, into an incomplete pass. This is the type of thing that is killing the Lions' offense and causing them to stall. Simple mistakes like this happen repeatedly every game.

The best football teams are built on consistent play. They do not depend on big plays to win, but they still get them anyway. The consistent teams have the ability to methodically move the football down the field and score even if the defense is taking away the big play. By proving they can run the ball effectively and make pass plays in the near areas of the field, they force the defense to bring the safeties closer to the line of scrimmage to help. That is what opens up the big plays. The consistent teams do not try to force plays into the strength of the defensive alignment. They force the defense to adjust to what they are doing because they are scoring, which opens up more options for the offense.

I do not know why Lions players have such difficulty getting these plays right. Certainly the coaches take some blame, but in the end it is the players who have to know their assignments and make sure they get everything right. The coaches cannot do much if the players do everything right in practice and then do not perform on Sundays. I do know that if the Lions had gotten a big gain on a short pass on the very first play of the game against the Eagles, it would have set the table for making the Eagles play their safeties in closer to the line of scrimmage.

We have blamed the coaches for not responding to mistakes and punishing players, but that would be wrong as well. The coaches reduced the role of Pettigrew against the Eagles by putting in Riley Reiff in his place on some plays. That could have been a clear message to Pettigrew that the Lions have other options they can use if he does not get his head into the game from the very start.

The Lions won the game against the Eagles despite their lack of execution on offense. The game was won by a good defense and a lot of help from the Philadelphia Eagles. The Eagles made even more mistakes than the Lions in terms of game impact. When the chips were down, the offense started making enough plays to overcome their own ineptitude. Even then, they tried to mess it up with bad penalties.

It may seem like I am being harsh in my criticism of the Lions, and you would be right. There has been enough time and continuity on the roster for these types of mistakes to have been eliminated. For all the hype we were given about the importance of continuity and having players that knew their job, we are not seeing it. Players that have been here a long time are making dumb mistakes that are inexcusable and costing the Lions games.

Andy Reid is on the hot seat in Philadelphia because he cannot get his team to perform up to expectations. The Eagles are wasting a very talented roster because of continual mistakes, just like what we are afraid the Lions are doing. Those mistakes have cost Eagles defensive coordinator Juan Castillo his job. If the Lions coaching staff does not find a way to get their players to execute the fundamentals of the game, we could see some of them looking for new jobs at the end of this season as well.

I could go on about this for many articles just showing the mistakes from the Eagles game alone. To be fair, every team makes mistakes in a game. The big question is whether the mistakes impact the game. There were literally at least two dozen plays on offense that I could break down to show why that unit is struggling, but I have gone on about this enough for now. Hopefully the Lions resolve these problems so that we can all move on to happier places.

Lions at Eagles: Detroit rallies to beat Philadelphia in overtime