As the Lions' offensive woes continue and the face-palming mistakes reach insufferable amounts, one thing remains constant: Matthew Stafford is not seeing the field as well as he has in the past.

The Detroit Lions' offensive problems are multifaceted. Receivers are dropping passes, running backs are missing open holes, the offensive line occasionally has miscommunication issues and pretty much everyone is fumbling. But one continuous issue that has been bugging me as of late is Matthew Stafford failing to notice an open receiver, while either trying to force a pass in a tight window or running himself into a sack. This issue was evident once again against Chicago.

The first play I'll be reviewing came early in the second quarter. The play is one of Scott Linehan's favorites: play-action pass to a tight end running a seam route up the center of the field: 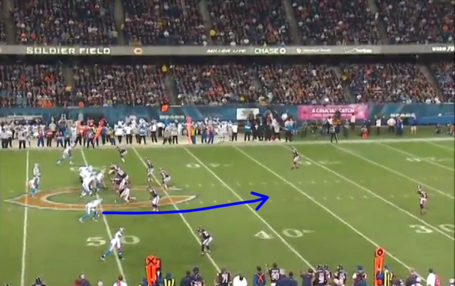 The design of the play hopes that the linebackers are sucked up toward the line of scrimmage with the play-action, giving Stafford enough room to throw it over their head before the safety closes in. However, you can tell there may be an issue with the play from the get-go. The linebacker lined up opposite Tony Scheffler already has inside position on him. If Scheffler tries to cut inside of him, the timing of the play will be disrupted. So he tries to loop around him instead: 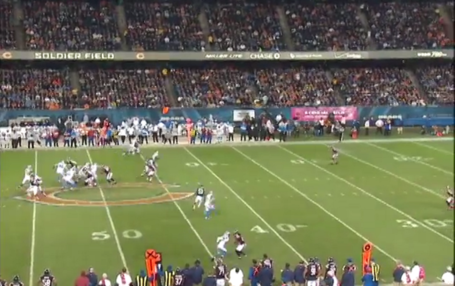 It does not work. Stafford's first read is not open, but who is? Brandon Pettigrew, who is running a similar route on the other side of the line. 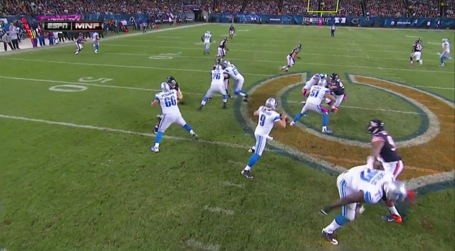 Here you can see just how not open Scheffler is, and while Pettigrew is not WIDE open, a back-shoulder throw (on the left side of Pettigrew) would likely result in a big completion. However, there is one big problem with this: Stafford is out of time at this moment and knows it. Gosder Cherilus has been thoroughly beat and Stafford is about to get sacked. Stafford wisely tucks the ball and minimizes the damage to a loss of one yard. This is obviously not fully on Stafford, but it's a clear example of how the offense got flustered once their first option was covered.

In the next play, the first option is again covered, but this time, the fault is solely on Stafford.

It's the waning seconds of the third quarter and the Lions are driving. It's second-and-three and Stafford is looking for Calvin Johnson. 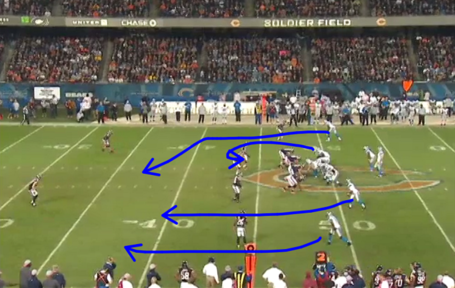 Johnson is at the top of your screen running a deep post. Brandon Pettigrew is running a curl, hoping to draw coverage from linebackers, opening the middle of the field for Johnson. The play is designed well, and Calvin is open, but the window is incredibly small. 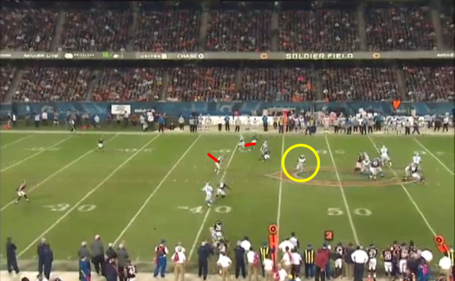 The Bears are in their Tampa-2 zone and Stafford will have to fit the ball between the corner's zone on his right and Brian Urlacher's (who is staring Stafford down like a hawk) middle zone. It's a throw we've seen Stafford make, but one he failed to complete on this play. His throw is behind Johnson and nearly intercepted by the safety. As I've highlighted, the easier option was Mikel Leshoure, who released out of the backfield and is sitting at the first-down markers waiting for an easy pass-and-catch.

I'm not trying to encourage Stafford to take the easy way out. The last thing I want from him is a guy who is too afraid to take chances. But when you're facing a defense as tough as the Bears, a checkdown for a first down is never a bad play, especially when your other option is a pass with a degree of difficulty near a 10 out of 10.

The final play was Stafford's most egregious error. Down 13 with under three minutes to go, the Lions had a prime opportunity to get in the end zone with three timeouts still in their pocket. It's second-and-goal: 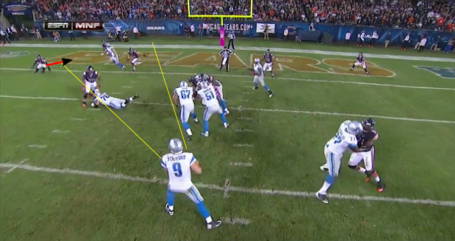 Stafford's initial look is to Scheffler, who is blanketed by three guys. Stafford pumps to him, which draws a defender covering Ryan Broyles (just off screen to the left) inside. As you can see, his momentum is shifting inside, leaving Broyles wide open for a moment or two: 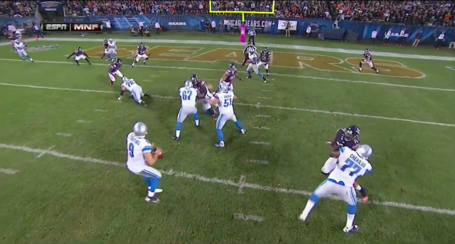 ... and there it is. It's not much of a hole, but given Stafford's cannon, it's really an easy touchdown. But Stafford doesn't see it, waits for Scheffler to cut inside and nearly throws an interception. Two plays later, Stafford succeeds in throwing an interception, and the game is basically over.

Again, Stafford is not the only problem with the offense. In fact, if you're looking for a scapegoat, throw a dart at the offensive roster. Nearly everyone is culpable. But no one has been more disappointing than Stafford in 2012. Last year, Stafford was decisive and confident in his throws. This year, defenses have learned his tendencies and taken away his first reads. If Stafford wants to take the next step as an "elite" quarterback, he needs to learn to improvise. When plays break down, he has to know where his second, third and fourth options will be and improve at finding them. Quarterbacks like Aaron Rodgers and Ben Roethlisberger make a living out of this. And while he doesn't have the mobility of either quarterback, Stafford has the smarts and the arm to compensate for that. He just needs to trust himself.