The struggling Detroit Lions head home to face the surprising Seattle Seahawks. The Seahawks boast an impressive defense, while Detroit's defense has also looked much improved. This statistical breakdown shows the two teams are more similar than one may think.

Share All sharing options for: On Paper: Detroit Lions vs. Seattle Seahawks

On Sunday, the 2-4 Detroit Lions will face off against the 4-3 Seattle Seahawks. Neither team is where most expected them to be at the beginning of the season. The Lions, struggling on offense and special teams, are in the cellar of the NFC North. The Seahawks, led by a strong rushing attack and dominant defense, are just one game behind the San Francisco 49ers. The Seahawks have impressive wins over the Green Bay Packers and New England Patriots, but they have also dropped a game to the St. Louis Rams. Despite the records, the Lions are actually a one-point favorite, according to most betting lines. Let's see what the charts say:

The Lions pass offense continues to put up the yardage, but inefficiently. Matthew Stafford's passer rating has dropped from 97.2 in 2011 to 78.4 this season. The Lions rank second overall in passing yards per game, but they are 26th in passing touchdowns, totaling just seven in six games. Lions fans continue to wait for the passing offense of last year to show up, while the Lions continue to fumble away.

Every single opponent failed to reach their passer rating averages against the Seahawks. Seattle has also held four of seven opponents under their yardage averages. Overall, the Seahawks rank tied for fifth in passer rating allowed (74.2), tied for second in yards per pass attempt (6.2) and seventh in completion percentage allowed. Also, they have allowed the least amount of passing touchdowns in the league (six in seven games). By almost every measure, this is a top 10 pass defense.

Player to watch: Chris Clemons. Clemons leads the team (and is third in the NFL) with seven sacks. The defensive end has also batted down four passes this season and has been an absolute terror for opposing quarterbacks.

Advantage: Seahawks +1. I'm done giving the Lions the benefit of the doubt from 2011. They just aren't getting things done this year, and with Nate Burleson out for the year now, it will be up to rookie Ryan Broyles to step up. The Lions still may turn things around this season, but this isn't the week it gets done.

The Lions run offense has been fairly inconsistent. As of late, they are an improved squad, having outgained their opponents' averages in two consecutive games. Overall, though, they are an average rushing attack. They rank 13th in yards per carry (4.1), but still have not had a rush of 20+ yards (only team in the NFL). Given the Lions' lack of big plays, their average of 4.1 a carry is actually quite impressive. This means the Lions are consistently getting 3-6 yards per running play.

The Seahawks may be an even better run-stopping team. Only the 49ers have surpassed the century mark against them, and only three of seven opponents have ran for more than 3.5 a carry. Every single opponent failed to surpass their averages against the Seahawks ... and some didn't even come close. The Seahawks are tied for fifth in yards per carry allowed at 3.7. They've only allowed two rushing touchdowns (tied for fourth), but they've given up four rushes of 20+ yards (tied for 12th with 10 other teams). Overall, they're a very solid run defense and almost assuredly top 10.

Player to watch: K.J. Wright. Wright leads the team with 54 total tackles and already has tallied five tackles for loss. Wright is in his sophomore year in the NFL and is playing some great ball right now.

Advantage: Seahawks +0.5. The Lions are improving on the ground, but the Seahawks defense is better. I expect the Lions to get somewhere around 75 yards at 3.8 a pop. In other words, they won't even try to run it much on Sunday.

Russell Wilson's rookie season has not exactly been explosive through the air. In five of seven games this season, he has thrown for under 200 yards, and he had a passer rating below 70 in three of seven games. However, the yardage numbers are low because Seattle's offense does not depend on the passing game much. They have the least amount of pass attempts in the league, despite not having their bye week yet.

When it comes to averages, the Seahawks aren't a terrible passing offense. They rank 22nd in yards per attempt (tied with ... the Lions), 23rd in passer rating and 22nd in completion percentage. So while they don't throw the ball very often, they are close to an average team when they do.

The Lions seemingly have been doing an adequate job of stopping opposing quarterbacks. They've held the last three opponents under a passer rating of 80. However, the Lions have still yet to be tested by a great passing offense. By yardage, the Lions have only faced one passing offense in the top half of the league. Still, the numbers are somewhat favorable for the Lions. They are 20th in passer rating allowed, 11th in yards per attempt allowed, 21st in completion percentage allowed and 12th in sacks.

However, the secondary remains beat up. Bill Bentley and Jacob Lacey remain two big question marks in terms of their injuries, while Amari Spievey is likely out for a significant amount of time with another concussion.

Player to watch: Cliff Avril. Despite their low amount of passing attempts, the Seahawks have given up 14 sacks (tied for 16th). In terms of sack percentage (times sacked/pass dropbacks), the Seahawks actually rank 23rd. This is a great opportunity for Avril to tee off. 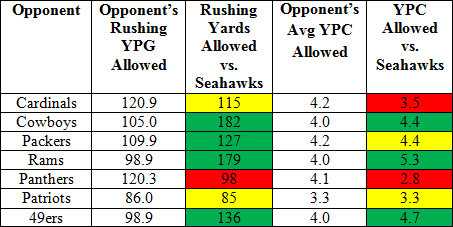 With Marshawn Lynch leading the way, the Seahawks boast one of the better rushing attacks in the league. They have surpassed rushing yard averages in four of seven games and yards per carry averages in three of seven. Lynch, himself, ranks fifth in the NFL in rushing yards per game. However, as a team they rank tied for 13th with 4.1 yards per carry. Again, the Seahawks' ranking is more dependent on play calling than anything else. Seattle has rushed the ball 227 times, which is fourth-most in the NFL.

In reality, the Seahawks' rushing attack is much like Detroit's. They have the same yards per carry (4.1), and the Seahawks, too, have not been a threat to break a long run. They only have one rush of 20+ yards in 2012. The only difference is that the Seahawks run the ball a lot more.

The Lions' strong run defense took a bit of a hit last week against the Bears. Still, the Lions have a pretty strong unit. They rank 16th in yards per carry allowed (4.1) but have only given up one rushing touchdown on the year (tied for second). Having faced some of the toughest rushing attacks (four top-10 rushing offenses), the Lions have held up very well. This week they'll face another tough match.

Player to watch: Lynch. His season has been somewhat pedestrian (by his standards) insofar. However, Lynch is a threat to break any innocent-looking run into a big play.

Advantage: Even. The ball game may come down to this. The Lions have held some great running backs in check (LeSean McCoy), but they've also allowed big yardage against others (Matt Forte). The Seahawks will get some yards, but the key is to make sure they are ineffective yards (no first downs, touchdowns, etc.).

Nowhere near Seattle: It's a well-known fact that Seattle has one of the biggest home-field advantages in the NFL. Having this game at home is a huge advantage for Detroit. The Seahawks are 3-0 at home, averaging 22 points a game, while they are 1-3 on the road, averaging just 12.8 points.

Desperation: Seattle, sitting at 4-3, is just one game out of first place in the tight NFC West. The Lions, at 2-4, are three games back of the Bears and in desperate need of a win if they have any hopes of at least contending for second place in the NFC North. The Lions absolutely cannot afford a loss, while a Seattle loss would not end their chances for an NFC West crown.

The Seahawks end up with a +0.5 advantage. However, this week, I think the "Off Paper" advantages are too big to ignore. Detroit is at home and needs a win more than any other team this week.

The defense has the advantage in three of the four matchups this week, so I am expecting a low-scoring game, much like Monday night. The key will be which players make the big plays when the team needs it. I think the Lions have more playmakers (even if they haven't been making plays lately) and they are certainly going to be playing with more desperation. The Lions overcome their deficit on paper: Lions 20, Seahawks 16.

Lions vs. Seahawks: Detroit rallies to down Seahawks, 28-24