Scott Linehan, who has been under fire for the Detroit Lions' weak offensive performance, responded with a brilliantly called game against the Seahawks.

The Lions' offensive struggle through the first six games had Scott Linehan on the hot seat. Despite the Lions having a top 10 offense, they weren't putting up the points and wins that defined the 2011 Detroit Lions. But on Sunday, Linehan responded with an excellent game. In key moments, he called the right plays and drew up some effective plays we haven't seen.

The first play came on the Lions' first scoring drive of the day. Having been victimized by the "wham" play on defense, the Lions drew up their version of the "wham" and deployed it to perfection. A "wham" play is characterized by a pulling lineman who crosses the field to block an unsuspecting defender, putting him well out of position to make the play. 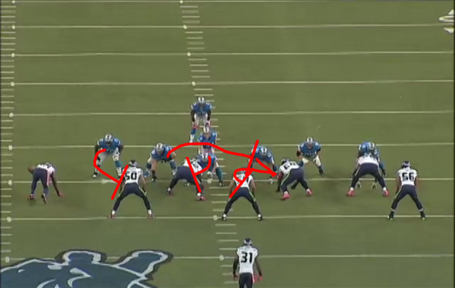 While Dominic Raiola seals the hole from the right side (camera left), Rob Sims slows the tackle but then quickly heads to the second level. The "wham" comes from Stephen Peterman, who pulls to hit the unsuspecting tackle. Meanwhile, Gosder Cherilus lets the defensive end run himself out of the play and heads to take on the linebacker (No. 50). This play requires time and patience from the running back. 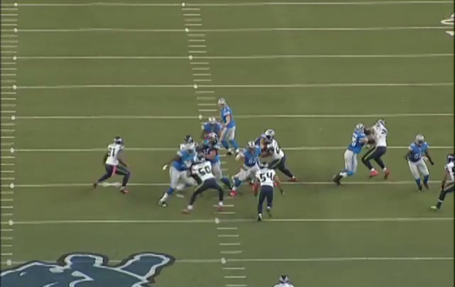 Peterman's wham isn't as forceful as he'd hoped. He gets the defender on the left shoulder instead of right in the chest, but it's enough to get the job done. At this point, the play looks doomed, mostly because of the linebacker Cherilus is blocking. But Mikel Leshoure remains patient, and it pays off. 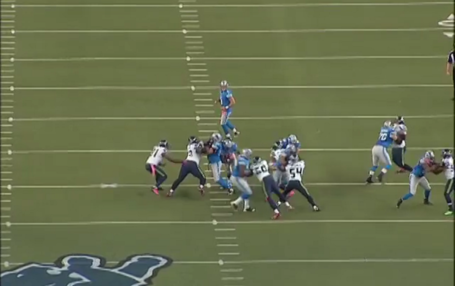 Look at the job Cherilus does. He destroys the linebacker all the way across the field and the hole for Leshoure is clear. Credit to Raiola for holding that block for as long as he had to. Leshoure picked up 16 and a first down and the Lions eventually drove to take an early 7-3 lead.

The next play (go to 6:27 in the video) was Linehan's most creative of the day. On a key 3rd-and11 in the third quarter, Linehan put his faith solely in rookie Ryan Broyles. 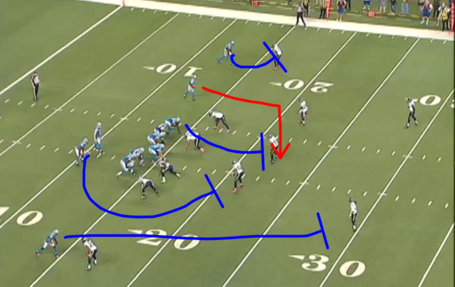 The Lions are three-wide, but only Broyles is truly running a route. The rest of the receivers on this play look like they're running routes, but are actually getting in position to block downfield after the completion is made. Titus Young is "running" a fly, to take the corner lined up opposite him out of the play and to block the deep safety. Kevin Smith runs out of the backfield to block a linebacker, and Brandon Pettigrew's assignment is to take out the other linebacker. Broyles must use the cushion his defender is giving him to beat him inside and use his lead blocker effectively. The play works perfectly: 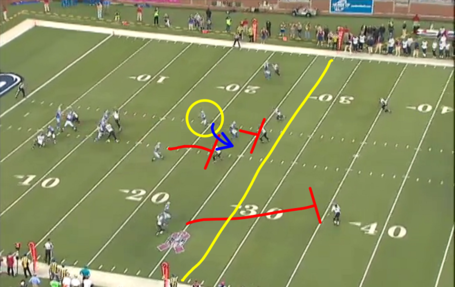 At the time of the catch, Pettigrew is in perfect position to make a block, while Smith is working his way there. The key here is that none of the players have engaged their blocks yet, avoiding any danger of a penalty. As the play progresses, Smith masterfully gets to the inside of the linebacker, creating the necessary hole. Broyles finds it, puts his head down and picks up the first.

The final play came as the Lions were, once again, struggling in the red zone. After a failed run and QB sneak from the one-yard line, the Lions faced a third-and-goal, hoping to take the lead early in the fourth quarter. The play Linehan dialed up was nothing unseen before, but it was the right call at the right time (jump to 10:17 of video). 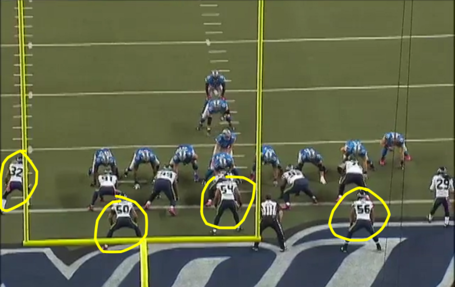 The play is a simple play-action bootleg. There is an option to pass to Pettigrew if Stafford can't run it in. On a play-action play like this, the key is fooling the linebacker. The cornerback on the edge is also worrisome pre-snap. But soon after the snap, it becomes clear this was the exact right call. 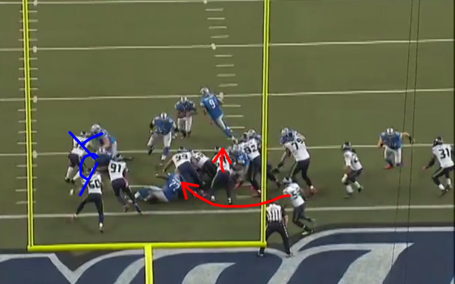 The middle linebacker immediately blitzes up the middle, while the corner on the edge is taken care of by a pulling Peterman. Pettigrew does an excellent job of taking care of two defenders on this play. He seals the outside of the defensive end, and he gets held by the linebacker, which takes away the pass option on this play and also takes the linebacker out of the play completely. The last piece of the puzzle is the linebacker on the right. At this point, the defender could probably outrun Stafford to the sideline. This is where the play action needs to be effective. 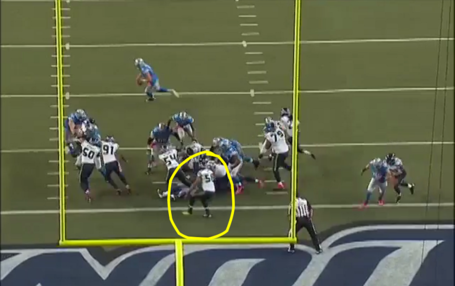 He bites. Hard. At this point he's flat footed and realizes he's been fooled. The play is over. Touchdown.

Now, obviously, one game doesn't exonerate Linehan from his previous faults, but the Lions offensive coordinator put together the game Lions fans have been clamoring for six weeks now. If he can continue to call solid games like this, we won't be talking hot seat in January, but whether the Lions can hold on to him. Linehan signed an extension with the Lions in the offseason, so he's unlikely to go anywhere next year. Still, it's nice to see him put together a solid offensive game again.