Lions video review: What happened to the long ball?

The Lions have failed to connect on deep balls consistently in 2012, even though it was a staple of last year's team. This film breakdown examines why.

Share All sharing options for: Lions video review: What happened to the long ball?

Through three weeks, many were wondering why the Detroit Lions weren't trying to throw the ball further down field. Against the Minnesota Vikings, I noticed that Matthew Stafford was looking downfield more often than in previous weeks, yet he almost never pulled the trigger. Were his receivers failing to get open? Were the Vikings preventing deep routes? Was Stafford simply hesitating too much? I decided to head to the "All-22" coaches film to check it out.

After picking up a huge pass interference penalty on the Lions' first offensive play of the game, Stafford was already in striking distance to tie up the game. 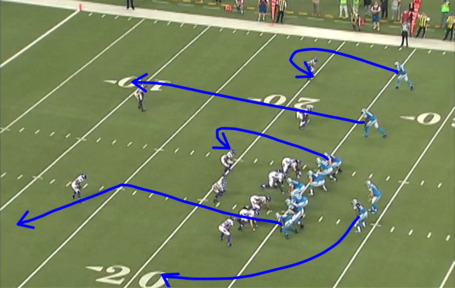 The Lions are in a two tight end set, with Calvin Johnson lined up in the slot and Nate Burleson at the top of the screen. Stafford is eyeing Johnson's seem route. He does not like what he sees: 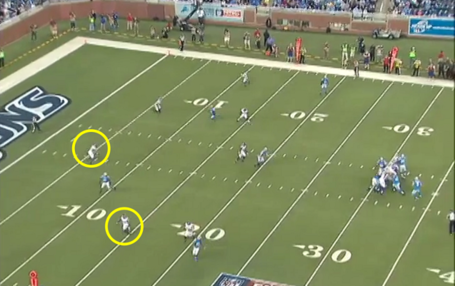 Stafford's eyes have drawn the deep (left) safety toward the center of the field, eliminating Johnson as an option (he's basically triple-teamed). However, when one door closes, another opens up. Because the safety has drifted to the right, and the corner had immediately jumped the route run by Mikel Leshoure, Brandon Pettigrew is wide open at the 10-yard line. With Stafford drifting to his left, it's a difficult throw to make, but given his arm strength, he is more than capable of making this play. Also, you may notice a wide-open Burleson at the top of the screen. However, Stafford's eyes and body have already drifted left, so this was not really an option. Either way, this was a big missed opportunity and probably would have resulted in a touchdown.

On the next play, we saw more of the same.

The Lions were driving late in the fourth quarter to try and get the score down to one possession. Here's the play the Lions ran: 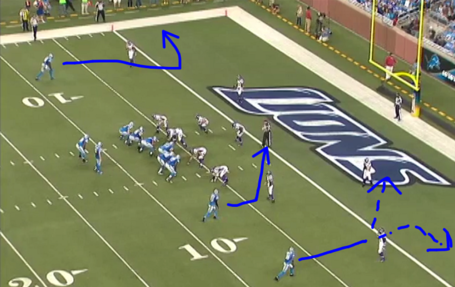 Johnson is at the top, with Burleson in the slot and Titus Young at the bottom. Johnson fakes a slant but runs an out, Burleson runs a slant, and it is my belief that Young has the option to run the slant or fade, depending on coverage.

After the snap, it becomes clear what route Young should run: 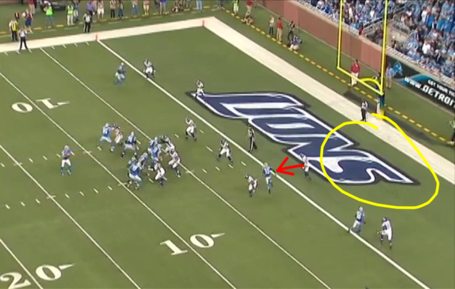 The safety jumps Burleson's route while the linebackers drop into zone coverage. That leaves Young one-on-one with inside leverage on the corner and a whole bunch of space in the end zone. He should run the slant. So what does Young do? 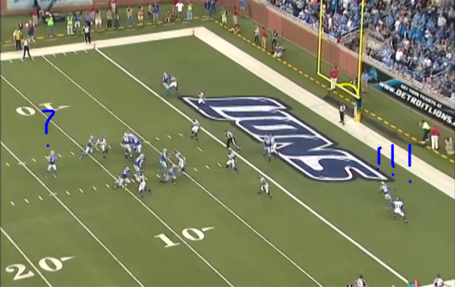 Stafford does not throw it. He either does not see the play (he appears to be looking for Burleson originally) or does not trust his ability to fit it into the window over the linebackers but not over Young's head. Young sees that he is not throwing the ball, so he cuts back to the outside and Stafford throws a prayer to him in the corner of the end zone. Incomplete. Another missed opportunity.

Late in the first quarter, the Lions tried to catch the Vikings secondary cheating on a play-action play. It nearly worked: 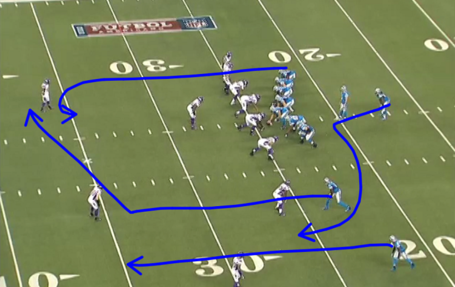 The primary target of this play is Johnson, who is lined up in the slot to Stafford's left. He is cutting across the field while Pettigrew is running a 15-yard curl and Burleson is running a fly. Stafford first fakes the draw to Leshoure, then looks to Calvin: 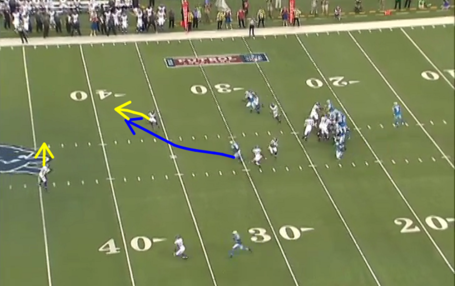 The safety, at first, bites on the play action hard. But because Johnson's route takes so long to develop, he is able to recover before Megatron reaches that side of the field. Meanwhile, the other safety, playing center field, is cheating over to Johnson's side, bracketing him deep. Stafford almost lets the ball go anyway, but smartly chooses otherwise. 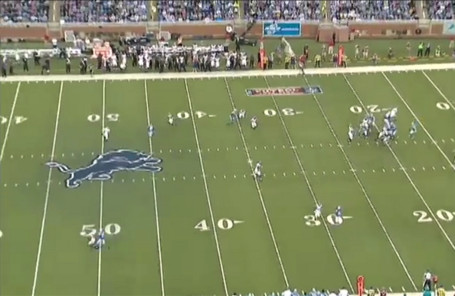 Stafford pulls up and doesn't really have any other options. Leshoure cuts upfield and Stafford lobs one in his direction but fails to connect.

This play failed due to poor design. The play action worked, but the main route took too long to develop, allowing the safety to recover from his mistake. Stafford did have another option, with Burleson being covered one-on-one, but he gets no separation running a fly. If he runs a comeback route, he could easily pick up 15 yards or so.

Overall, this wasn't exactly what I expected reviewing the film. I figured teams were taking away Calvin Johnson deep and Stafford needed to look for more checkdowns. While the Vikings did try to take away Johnson on a few plays, I was shocked to see that Stafford actually had a couple of downfield options that he passed on or, even worse, didn't even notice.

As teams begin to give Johnson more and more bracket coverage, Stafford will need to start involving his other receivers, and Scott Linehan will need to develop plays that benefit from these sort of coverages. A failure to do so will result in more hesitation from Stafford and continued inconsistency from the offense.