When diagnosing the Lions' offensive problems, it becomes clear that at least some of the blame should be on Matthew Stafford's shoulders. A film review of his play reveals pocket presence as an ongoing problem for him.

The Detroit Lions' offensive problems run wide and deep. There are drops. There are penalties. There are miscommunications. But one of the most concerning and recurring problems is the play of Matthew Stafford. Specifically, Stafford has been struggling all season with recognizing pressure, both when it is there and when it isn't. On several occasions against the Minnesota Vikings, this problem reared its ugly head ... and at the worst possible times.

The Lions found themselves down 7-0 early in the first quarter. On the Lions' ensuing drive, they could ill afford to go three-and-out. Instead, they did something worse.

Facing a third-and-10, the Lions were in an obvious passing down, and pressure was coming: 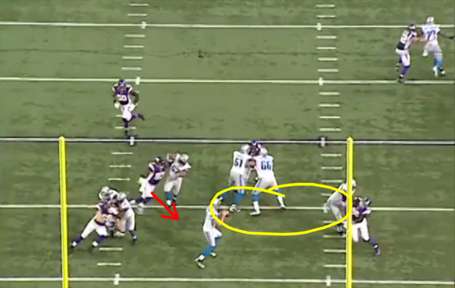 Rob Sims cannot keep contain on his guy and Stafford sees it. As you can see, Dominic Raiola and Stephen Peterman are taking care of the other defensive tackle, while Gosder Cherilus has forced the defensive end to try and take a very wide route to Stafford. There is a clear pocket for Stafford to step into, but he fails to do so. 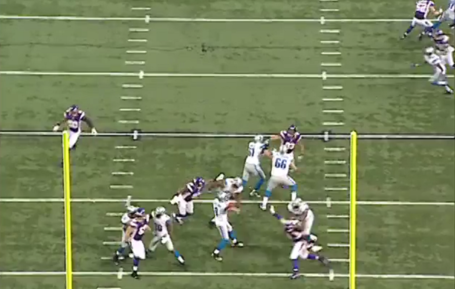 Stafford stays where he was and throws off his back foot, absorbing the hit as he releases the ball. You can clearly see the lane to step in is still there. As a result, his pass comes out weak and wobbly. 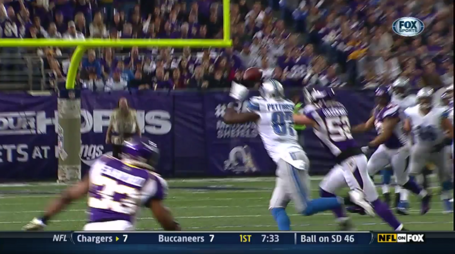 Brandon Pettigrew is open for a first down conversion, but because the ball came out with no spiral and Stafford didn't step into the throw, Chad Greenway is able to catch up to the pass and pick it off. Now the Lions are down 10.

A couple possessions later, the Lions were still down 10 but threatening in the red zone. Again, it was third down (and five), and again, Stafford failed to adjust to pressure. 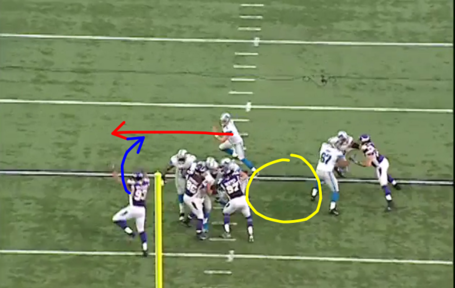 Stafford goes into panic mode a little too quickly here. Both defensive tackles are being taken care of and Jared Allen is effectively being doubled. But Stafford's internal clock goes off and he darts to his right. This is the worst possible place he could choose to go, as the defensive end on that side is running free. A better option would have been to his left, where there was a small, but obvious, lane. This could have extended the play, and allowed a receiver to break open. Instead, he ran himself right into a sack.

But there is hope. Stafford is capable of reading the pressure correctly, and he did so late in the game. 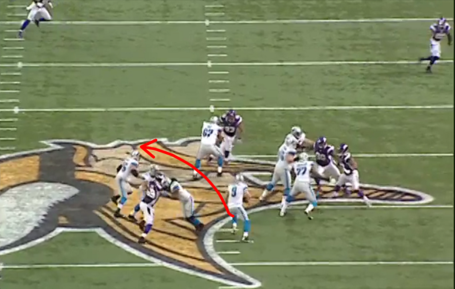 The protection on this play is pretty solid, but Allen is getting dangerously close to Stafford. Matthew recognizes this and sees a huge lane in protection to his left. He decisively darts for the open field. His only mistake is temporarily taking his eyes away from downfield at this moment. 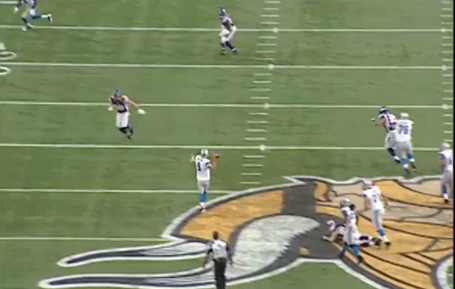 However, he quickly refocuses and finds Calvin Johnson for a big 15-yard completion. Look at all that open space.

Stafford isn't one of the most mobile quarterbacks in the league, but he doesn't have to be in order to improve his pocket presence. Some of the least mobile quarterbacks in the league (Tom Brady, Peyton Manning, Drew Brees) are the best at recognizing pressure. They know when to hold strong in the pocket, and they know when they have to step into open areas to extend the play. Once Stafford improves this aspect of his game, he, and the Lions offense, will be a much bigger threat.