The 4-5 Detroit Lions face off against the 6-3 Green Bay Packers this week. A statistical breakdown of the two teams reveals a much closer game than many are predicting.

The Green Bay Packers are in town this week as the Detroit Lions look to rebound from their poor performance in Minnesota. The Lions now sit at 4-5, with a putrid 0-3 record in the division. The Packers are hitting their stride and have now won four straight. They've yet to drop a divisional contest, though they have only played an NFC North foe once. The Packers are modestly favored by three points, but the common consensus is that this will be an easy win for them. 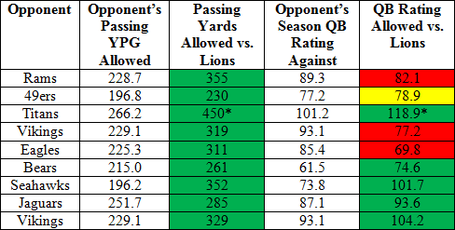 The Lions passing offense continues to be great ... on paper. They lead the league in yardage, they've outperformed the opponent's passer rating average in five of nine games, including the past four games. They rank 14th in passer rating (88.3), 12th in completion percentage (64.3 percent) and t-8th in sacks allowed (17). However, ask any Lions fan, and the passing game is not okay.

There are some stats to support that. They rank just 20th in yards per attempt (7.2), t-13th in passing touchdowns (13) and just 13th in total scoring (24.0 points per game). When you have the number one passing offense and your raw numbers are that low, there's one clear problem: consistency.

The Packers have not been great against the pass this year. Seven of nine opponents put up more yards than they average against Green Bay, while six of nine met or outdid their passer rating average. However, the Packers rank sixth in passer rating allowed (78.7), ninth in yards per attempt allowed (6.8) and sixth in completion percentage allowed (57.1 percent). So what does that mean?

Well, the Packers have a similar schedule to the Lions and, as I note nearly every week, the Lions have not played any particularly good passing offenses. The same goes for the Packers. If you look closely, the Packers have faced four teams which average less than 200 passing yards a game, and four averaging less than an 80 passer rating.

I think a fair assessment of the Packers pass defense is that they are good against bad offenses and bad against good offenses. In other words, they're pretty average.

Player to watch: Casey Hayward. Hayward, a second-round rookie, took over a starting role three games ago, after secondary injuries piled up for the Packers. In the past four games, Hayward has tallied three interceptions and six passes defended. He is an emerging star.

Advantage: Lions +1. With the Packers banged up on defense, the Lions absolutely need to take advantage of this matchup. The key will be keeping Matthew Stafford upright. The Packers are second in the league in sacks (28), while the Lions have allowed the eighth-fewest sacks this year (17). 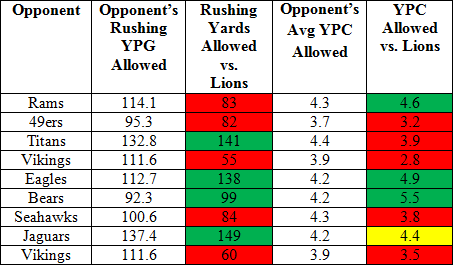 I ... just don't know. One week the Lions are piling up 138 yards on 4.9 a carry on the Eagles. The next week, they're getting completely shut down by the Vikings (twice). The Lions are 17th in yards per carry (4.1), but seventh in rushing touchdowns (10). They STILL don't have a rush of 20+ yards. They are just an average, inconsistent mess. 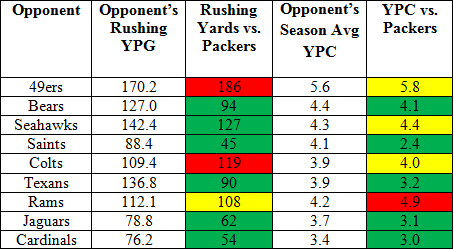 The Packers, however, have been consistently solid against the run. They've held six of nine opponents below yardage averages (and five below 100 yards), and only one team has surpassed their yards per carry average against the Packers.

Player to watch: Mikel Leshoure. Last week, I found a couple key plays in which Leshoure missed a hole and an opportunity to pick up big yards. If his vision issues continue this week, the Lions have no shot on the ground.

Advantage: Packers +0.5. The Packers are hurting because of injuries, but have done decently without the likes of Clay Matthews. And the Lions are just too inconsistent to know if they are going to find success on the ground or not. I'm leaning toward no. Don't expect anything more than 80 yards. 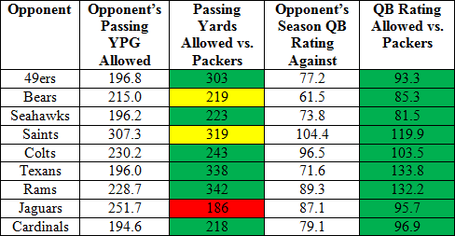 What's wrong with Aaron Rodgers? Uh ... nothing. Though the Packers rank just 12th in passing yardage, they are first in passer rating (108.3), first in touchdowns (26), sixth in completion percentage (66.9 percent) and tied for third in interceptions (five). Anyone who thinks Rodgers is having a down year isn't paying attention.

There is some hope, however, as the Packers have allowed the second-most sacks in the league (29). And, now, without right tackle Bryan Bulaga, the problem is even bigger.

This. This is why I continue to bag on the Lions pass defense. They've only held three of nine opponents below yardage averages and only one below passer rating averages. And they haven't played anyone good yet. Despite their misleading 12th ranking, the Packers pass offense is good, perhaps the best.

The Lions, meanwhile, are not very good on defense by almost all statistical measures. They are 25th in passer rating allowed (93.4) and 28th in completion percentage allowed (66.1 percent), but, to be fair, seventh in yards per attempt allowed (6.7). Basically, teams are beating them with short, quick passes. Of course, as we saw last week, when teams take their shots downfield, the Lions are susceptible to the big play. They've only allowed 18 pass plays of over 20 yards (second fewest) but have not faced many quarterbacks who can stretch the field.

Player to watch: Jordy Nelson. One of Rodgers' favorite targets, Nelson has been struggling with an ankle injury, but he appears to be mostly healthy after the bye. Expect him to see the ball come his way early and often.

Advantage: Packers +2. This is one of those matchups where I try to find a way for the Lions to win, but I can't. Their only true hope is to get pressure on Rodgers all day. But, even though he's taken the second most sacks, Rodgers has not been turning the ball over. He only has one fumble and five interceptions. 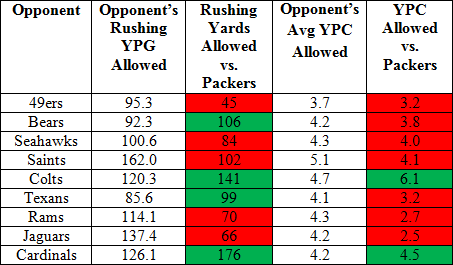 The Packers haven't been particularly lethal in the running game again this year. They rank 23rd in yards per carry (3.8) and only have two rushing touchdowns, the least in the NFL. And it's not like the Packers just don't run the ball. Their 234 rushing attempts rank 20th in the league and are only 10 rushes off the league average. 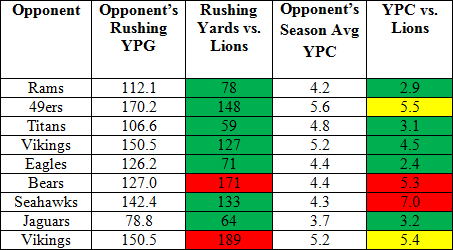 The Lions run defense continues to be pretty solid. Their stats have been victimized lately by big rushes against the Seahawks and Vikings, but overall they still remain fairly solid. Only two opponents have outgained their averages against the Lions. Overall, their 4.5 yards per carry allowed ranks them 25th, but that is more a result of the opponents they've played. Seven of the Lions' nine opponents rank in the top 12 in rushing offense.

Player to watch: Nick Fairley. With Corey Williams likely out another week, Fairley will get the start again. Last week, he spent the entire afternoon in the Vikings' backfield. I'd be surprised if he didn't tally at least one more tackle for loss on Sunday.

Advantage: Lions +0.5. This is not going to be a huge matchup in determining the winner this week. But, regardless, the Lions have the clear advantage. The key for the Lions is to not allow another huge run.

INJURIES!! - Both teams are struggling to get healthy at this point in the season. Both teams are specifically beaten up in the secondary. This game may come down to which team has the better depth.

Streaking - No, not that kind of streaking. The Packers are on a four-game winning streak and are averaging nearly 32 points per game during that stretch. The Lions, meanwhile, had their two-game winning streak come to an end last week in Minnesota. If game-to-game momentum exists (which I don't believe it does), it's on the Packers' side.

The Packers come out with just a +1 advantage. This is significantly less than I was expecting. But the two teams are very similar. Both teams are dealing with secondary injuries. Both teams have good passing offenses and struggling run offenses. The difference, however, is that the Packers' passing offense is clearly superior to the Lions. I do think the Lions will come out swinging, for once. But when the Lions run out of steam, the Packers will be there to take the game. Packers 34, Lions 27.