The 3-4 Detroit Lions face the 1-6 Jacksonville Jaguars in a crucial game for Detroit. Our statistical preview breaks down the matchup between these two teams.

Share All sharing options for: On Paper: Detroit Lions at Jacksonville Jaguars

The Detroit Lions head down to Jacksonville this week to face the 1-6 Jaguars. Detroit is in desperate need of a win to keep pace in the competitive NFC North, while the Jaguars are just trying to figure out where to go from here. The two teams have faced four times since the Jaguars' inception in 1995, with Jacksonville pulling out three of those games. This week, the Lions are favored by four, but we all know that means nothing. What do the charts say?

Despite the Lions' offensive struggles, the pass offense has actually been pretty solid. Obviously, Matthew Stafford is still putting up crazy yardage numbers, and while his passer rating numbers are down, he is still outperforming opponent averages more often than not. Overall the Lions rank 14th in passer rating, 20th in yards per attempt and 12th in completion percentage. But the Lions have faced some good defenses already this season. Four of their seven opponents rank in the top 10 in passer rating allowed. The Lions aren't where they want to be in terms of their passing attack, but they are still a force to be reckoned with.

The Jaguars have been all over the place defending the pass. Four of seven opponents outgained yardage averages, while three outdid their average passer rating. Only one opponent has put up 300+ yards, and one has reached a passer rating of 100 or more. But overall, most opponents seem to perform right near their averages.

The Jaguars rank 17th in passer rating allowed, tied for 12th in yards per attempt and 14th in passer rating. They are the definition of average. However, when it comes to game-changing plays, the Jacksonville defense is lacking. The Jags only have four interceptions (tied for 25th) and seven sacks (32nd).

It's impressive that the Jaguars' statistics can be so average considering they are often playing from behind and are not benefiting from any explosive defensive plays, but overall, it's still an underwhelming unit.

Player to watch: Calvin Johnson. Johnson is struggling with a knee injury and has sat out two consecutive days of practice this week. While he has been trying to downplay the extent of his injury, you can see the toll it is taking on him every time he tries to pull himself up from the turf. Let's see if his few days of rest have treated him well.

Advantage: Lions +1.5. I think the Jaguars defense is better than most give them credit for, but without the benefit of sacks or interceptions, they won't be able to contain the Lions offense forever. I think Stafford becomes the second quarterback to put 300+ yards on the Jaguars and finishes with a passer rating around 90. 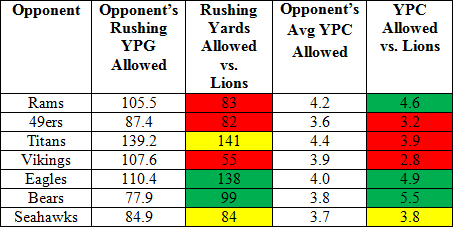 The Lions have been effective, but non-explosive, on the ground all year. They've met or exceeded opponent YPC allowed in four of seven games, but have only surpassed yardage averages in two of seven. The duo of Joique Bell and Mikel Leshoure is not flashy, but has been getting the job done (as long as neither is fumbling). They are still the only team in the league without a rush of 20+ yards.

I don't know what to make of this at all. The Texans, Colts, Bengals and Bears destroyed the Jaguars defense on the ground, but Jacksonville impressively held the Raiders and Packers in check the last two weeks.

The raw data isn't much help, either. They are ceding 4.2 a carry (tied for 20th), have allowed four rushes of 20 yards or more (tied for eighth with nearly half the league) and have given up eight rushing touchdowns (tied for 23rd). There's no consistency anywhere.

Player to watch: Paul Posluszny. The former Nittany Lion is the Jaguars' leading tackler and has been formidable in both the passing and rushing attacks, notching five passes defended and two tackles for loss.

Advantage: Draw. I can't get a read on Jacksonville's rushing defense from the statistics, and the Lions offense is average on the ground. But, for fun, I'll predict that Leshoure breaks out a big run for the Lions' first 20+ yard gain of the year.

Jacksonville's 32nd rating appears to be no mistake. Having only surpassed 300 yards once and a passer rating of 90+ once, the Jags don't offer much to be fearful of through the air. Youngster Justin Blackmon has been underwhelming as a rookie, but he is starting to see more targets. In three of the past four games, he has seen eight or more passes thrown his way.

The Jaguars rank 27th in passer rating (76.4), 31st in completion percentage (55.0 percent) and dead last in yards per attempt (5.7). Even pass protection has been a problem. They have given up 20 sacks, which is only good enough for 25th in the league. But, hey! They've only thrown three interceptions! That's the least in the NFL!

The Lions' ninth ranking is an absolute facade. Four of seven teams have surpassed both passer rating and yardage averages against the Lions. So why are the Lions ranked so high in passing yards allowed? The answer is simple: look at their opponents. The Lions have yet to face a top 10 team in passing yards. They have faced FIVE teams in the bottom 10.

The story becomes clearer when we look at the raw numbers. They Lions rank 23rd in passer rating allowed (92.6) and 22nd in completion percentage (64.1 percent), but they are tied for 10th in yards per attempt allowed (6.8). The Lions are very much a bend-don't-break passing defense. They don't give up the big play very often. In fact, they've given up the fewest passing plays of 20+ yards in the NFL. But, teams complete a high percentage of passes and typically move down the field methodically against the Lions.

Player to watch: Jonte Green. I think Chris Houston will do a good job of keeping Blackmon in check, but I can't help but fear any time Gabbert chooses to throw in the direction of Green. Jonte hasn't been terrible thus far, but he has been a liability. I feel it's only a matter of time before he gives up a huge play.

Advantage: Lions +1.5. In general, I think the Lions defense has been given a little too much credit, especially their pass defense. The Lions have yet to face a true test, and no team has been able to take advantage of the Lions' glaring weaknesses in the secondary. Lucky for the Lions, the Jaguars won't be able to, either. 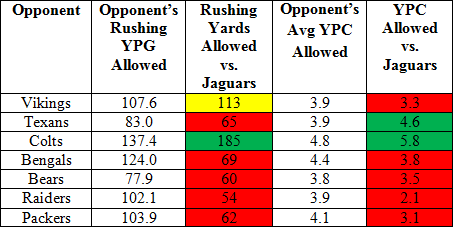 As a disclaimer, the Jaguars were without Maurice Jones-Drew for nearly all of the Raiders game and the entirety of last week's game against the Packers. But, regardless, the Jaguars have not been very good with or without Jones-Drew. They are only averaging a mere 3.8 a carry (tied for 24th) and have only reached the end zone twice (tied for last). They've only reached 100 yards twice this year, and in both games their opponent was ceding over 100 yards per game on average. They haven't faced particularly tough rush defense, yet have still been unable to get things going.

Last week, the Lions' statistics were victimized by Marshawn Lynch's 77-yard touchdown. Take that run away and the Seahawks had just 56 yards and 3.1 a carry. However, the Lions have given up huge runs in two consecutive weeks, so it is unfair to simply throw out that run. The Lions are ceding 4.4 a carry, which drops them to 22nd in the league (last week, they were 16th).

Still, I think there's reason to be optimistic about the Lions' run defense. They've played some elite rushing attacks and have held most of their opponents at or below their rushing averages.

Player to watch: Rashad Jennings. Jennings steps in for Jones-Drew with just 51 rushing attempts on the season. He's averaging a meager 2.9 a carry thus far in 2012. Jennings is a big, physical back that is capable of breaking some tackles, but he hasn't been doing much after that.

Advantage: Lions +1. I don't think this matchup will have a big effect on the game, but the Lions have a clear advantage here. I'd be surprised to see the Jaguars total more than 75 yards.

Jaguars keep it close. Despite their poor record, the Jaguars have hung with nearly every team they've played. While it appears they got blown out by the Bears, that game was actually tied at halftime. They've dropped two games in overtime and took Green Bay down to the final possession last week. If they hang around and the Lions make a bad mistake late, an upset isn't out of the question.

Bad at home: The Jaguars appear to be one of those weird teams that is better on the road. At home, the Jaguars are 0-3, losing by a margin of 95-20. On the road, they are 1-3, with two overtime losses and only a 93-83 margin of defeat. How bizarre.

The Lions dominate the statistical advantage for the first time this year with a +4 advantage. The Lions have no excuse not to come out with a win. They need it to try and keep pace in the playoff race, while the Jaguars' season is, for all intents and purposes, already over. The Jaguars defense is good enough to keep this game close for a while, but their offense offers no threats at all. After all is said and done, the Lions will eventually pull away as the clear, superior team. Lions 27, Jaguars 9.

Lions at Jaguars: Detroit cruises to 31-14 victory against Jacksonville