The Detroit Lions square off against the Houston Texans this year in the opening game on Thanksgiving. Our statistical preview gives the Lions a small chance for victory.

Share All sharing options for: On Paper: Detroit Lions vs. Houston Texans

The Detroit Lions face the Houston Texans this week in the 73rd annual Thanksgiving Day Classic. Detroit (4-6) has dropped two games straight and hasn't won on Thanksgiving since 2003. The Texans (9-1) will be making their Thanksgiving Day debut this year. They come in having just squeaked by a poor Jacksonville Jaguars team, but have had impressive wins over the Bears, Ravens and Broncos. The Texans are three-point road favorites this holiday. Do the charts agree? 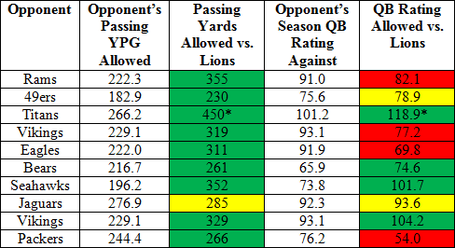 Despite the high ranking and the green left column, the Lions pass offense remains a disappointment. The right column is much more telling. Detroit has only outperformed opponents' passer rating averages in four of 10 games. They rank 19th in passer rating (85.2), tied for 16th in yards per attempt (7.2) and 13th in completion percentage (62.5 percent). I think it's fair to say the Lions passing offense has not been the top-tier threat that it was last season. 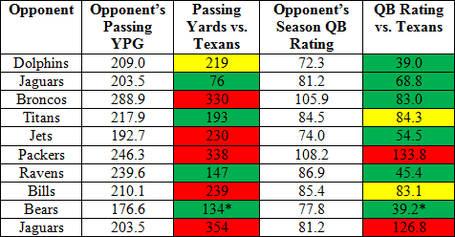 The Texans have been a mixed bag. They've held eight of 10 opponents at or below passer ratings, but five of 10 have outgained yardage averages against the Texans. The raw numbers, however, point to a pretty tough defense. The Texans rank seventh in passer rating allowed (77.2), tied for fifth in yards per attempt (6.5) and first in completion percentage (54.2 percent). To make matters worse, the Texans are also a supreme pass-rushing team. Their 27 sacks rank tied for eighth in the NFL.

Player to watch: J.J. Watt. This is a bit of a no-brainer. For some reason, Dominic Raiola decided to give Watt some bulletin board material this week, telling Watt to "Bring it." But, in truth, Watt needs no motivation. The guy has already tallied 11.5 sacks this year.

Advantage: Even. This should be a very interesting matchup this week. Titus Young is out, but based on what coaches were saying, he may have been hurting the team more than helping. Expect to see a lot of Ryan Broyles with a little Mike Thomas sprinkled in. I think the Lions will put up around 300 yards through the air but will turn the ball over at least once. 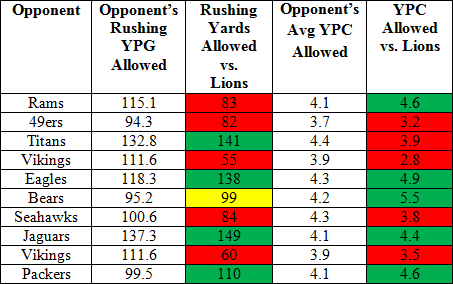 We have enough data points where we can officially call the Lions run offense improved. They appear to be right around average, having outgained yardage in four of 10 games and yards per carry averages in five of 10. Not surprisingly, they rank 15th overall with 4.1 a carry. But, stop me if you've heard this before: the Lions have no home-run threat in the running department. They still don't have a run of 20+ yards. 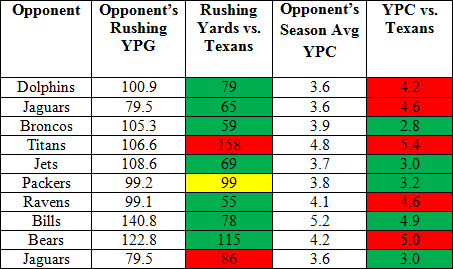 The Texans answer with a pretty solid defense. Only two of 10 opponents have outgained yardage averages against the Texans, but five of 10 averaged a higher yards per carry. They are also only allowing 3.9 yards per carry, which ranks them tied for seventh, and they have only allowed 3 rushes of 20+ yards (second-least). So don't expect any big plays on the ground from the Lions this week.

Player to watch: Watt. Not to beat a dead horse here, but Watt is an incredible force for this defense. In addition to his 11.5 sacks, he has 10 tackles for loss. Try watching him for an entire series. Chances are he'll embarrass someone at least once.

Advantage: Texans +0.5. The Lions will need to get the running game going to keep the pass rush off of Matthew Stafford. It will be a tough task this week against a team that has only allowed 100+ yards twice this year. 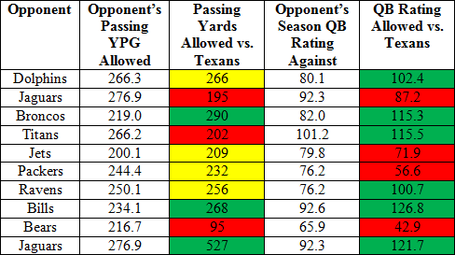 The Texans have performed very close to averages all year. Their passer rating has been above average in six of 10 games, while yardage averages have been at average four times, above average three and below average in three. Overall, they rank seventh in passer rating (94.9), tied for sixth in yards per attempt (7.7) and ninth in completion percentage. Overall, the Texans sport an above-average passing offense that could potentially be a top-10 unit. 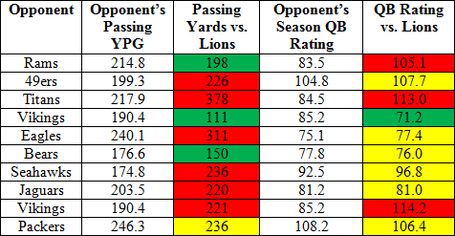 I haven't been very high on the Lions pass defense, despite their high ranking all season. The charts have pretty much backed me up all season. But I need to give at least a little credit to the Lions. Despite all the injuries, Detroit has managed to sport an average pass defense all season. They rank 27th in passer rating allowed (94.5), but tied for eighth in yards per attempt (6.8). In terms of pass rush, the Lions have managed 23 sacks, which puts them right in the middle of the league (tied for 16th).

Player to watch: Andre Johnson. Again, it's a bit obvious, but when you're facing a top-five receiver in the league, you better watch him. Chris Houston has done a great job shutting down No. 1 receivers this year, but he hasn't faced anyone the caliber of Johnson.

Advantage: Texans +1. The Texans pass offense isn't exactly explosive, but it hasn't needed to be (outside of last week). But they are a very efficient unit. If the Lions get Louis Delmas back, it will go a long way in preventing the big play, which has been a recent problem for the secondary. Still, I think Matt Schaub and the Texans will be able to move the ball effectively through the air. 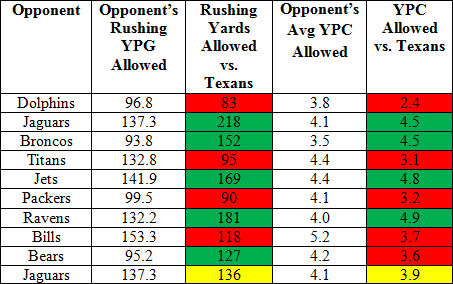 Arian Foster is not just a good Twitter follow, he's also a pretty good running back. He and the Texans have outgained averages in five of 10 games, though they have only surpassed YPC averages in four of 10. Surprisingly, the Texans only rank tied for 19th in total YPC (3.9). Foster himself is only averaging 3.8 a carry, but his 10 rushing touchdowns lead the league.

The Texans' high ranking seems to be more a result of getting ahead in games early and running the ball for the rest of the game. In fact, Houston has the most rushing attempts in the league (350). 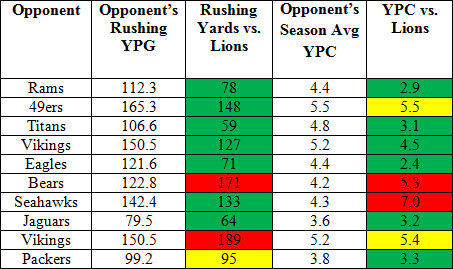 The run defense remains the Lions' most improved unit. They've held seven of 10 below yardage averages and six of 10 below yards per carry averages. They are giving up 4.3 a carry (tied for 20th), but this is mostly a result of a tough schedule. Seven of the Lions' 10 opponents rank in the top 12 in rushing offense.

Player to watch: Nick Fairley. Fairley has been killing it in the past few weeks with Corey Williams sidelined with an injury. Fairley now leads all Lions defensive linemen with five tackles for loss, despite his limited snaps.

Advantage: Even. I think the Lions have a very good chance of winning this matchup. However, because the Texans can convert in the red zone on the ground, I can't give either team the advantage.

Something to play for. Even the most optimistic Kool-Aid drinking Lions fans have pretty much given up hope of any sort of playoff chances. Meanwhile, the Texans are fighting to keep their one seed in the AFC with Baltimore (8-2), which is hot on their heels.

Distractions: Since their loss to Green Bay last week, the Lions have been dealing with embarrassing image issues. It started with the on-field spat between Shawn Jefferson and Scott Linehan. Then Titus Young was kicked out of the Lions facility on Monday and will be inactive Thursday. Can the Lions put these distractions behind them?

I think the Lions keep it close and both teams try to remain balanced on offense. The result will be a close, low-scoring game. Texans 20, Lions 16. Happy Thanksgiving, everyone.

Lions vs. Texans: Detroit gets no help from officials in heartbreaking 34-31 loss