Share All sharing options for: NFL to review Ndamukong Suh's 'out of the ordinary' kick on Matt Schaub

It wouldn't be Thanksgiving these days without some kind of controversy involving Detroit Lions defensive tackle Ndamukong Suh and a kick of some sort. Fair or not, the latest controversy stems from Houston Texans quarterback Matt Schaub getting kicked in the groin by Suh during the first quarter of Thursday's game. The NFL has since determined that the kick will be reviewed, and Ray Anderson, the executive vice president of football operations, said that upon first glance, it didn't really appear to be a natural move. From Pro Football Talk:

"It appeared to be a little out of the ordinary, let’s just say," Anderson said. "It didn’t appear to be a natural football move, but we’ll withhold judgment until we see all the angles."

To me, it sounds like judgment has already been made based on what Anderson said. Any other player in the league would probably get the benefit of the doubt, but because Suh was ejected on Thanksgiving for stomping a Green Bay Packers player last year, the worst is being assumed. In this case, the worst is the conclusion that Suh intentionally kicked Schaub in the groin.

When I first saw the replay on Thursday, I didn't think there was any possible way that this was intentional because Suh got pulled down and was staring at the ground when his foot made contact with Schaub. Also, Suh's leg whipped around as part of him going to the ground, so in that sense the motion of it wasn't unnatural. Take a look for yourself:

Since watching this over and over this morning, it does appear that the point of contact in the kick is a bit questionable. Specifically, it does look like Suh may have pushed off once he made contact with Schaub's groin. I don't think Suh intentionally created contact with Schaub's groin, but did he add a little extra push once contact was made? It's tough to tell, even when slowing it down frame by frame. 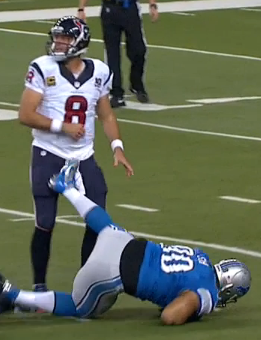 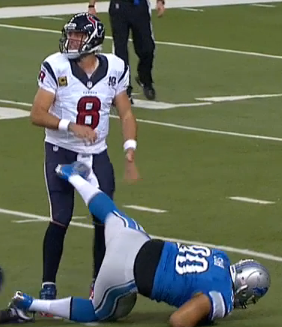 Was the ending of that just the physics of Suh's foot coming into contact with Schaub's groin, or did Suh add a little something extra to it? I can't tell, and this is after watching it seemingly close to a hundred times and going frame by frame. I know the national media has already concluded it was a dirty play, as evidenced by the disgraceful CBS halftime show on Thursday, but I suppose I shouldn't have expected anything else given Suh's reputation around the league.

As for what the NFL will do to discipline Suh, I'm really not sure. If it was based strictly on this one play, I don't think there would be any discipline because I think Suh would get the benefit of the doubt. After all, how can you go inside his mind on a split-second play where he was taken to the ground? I'm still not quite sure how people can believe that Suh made a conscious decision to kick Schaub in the groin as he was falling to the ground and then made contact with 100 percent accuracy.

Anderson himself said that the NFL goes into a player's history in cases like this, and the player's history will factor into their thinking. Anderson also said that repeat offenders "aren't entitled to the benefit of the doubt." In other words, the NFL's opinion on this play is likely to be the same as the media's based on Suh's past more than anything. I don't think that's fair, but hey, if Suh doesn't stomp somebody on Thanksgiving last year, we probably aren't having this conversation.

Should the NFL rule against Suh and decide to discipline him, it's likely that he will be suspended given his history. Obviously this won't really be like last year where it affected the Lions in the middle of a playoff race, but another suspension for Suh would be bad news for both him and the franchise simply from a PR standpoint.