The Detroit Lions (4-7) face off against the Indianapolis Colts (7-4) this week. Though the wins and losses favor the Colts, most statistical analysis shows that this matchup favors the Lions.

Share All sharing options for: On Paper: Detroit Lions vs. Indianapolis Colts

The Indianapolis Colts come to town this week for the first time since 2004. In that matchup, Peyton Manning and the Colts destroyed the Detroit Lions 41-9. This week, the 7-4 Colts come in as five-point underdogs against a struggling 4-7 Lions team. The Vegas line seems a little strange considering the trajectory of the two teams, but let's see if the charts agree. 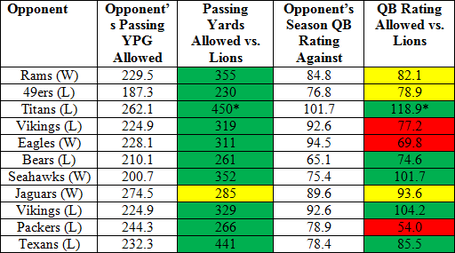 Despite all the struggles, Matthew Stafford and the Lions pass offense appears to be starting to get things back on track. They've surpassed yardage averages in every game this season and only underperformed in passer rating in three games this season.

But those stats don't tell the entire story. While the Lions have struggled with drops and mental mistakes at the worst possible moments, the passing offense has been fairly effective all season, and the charts agree. 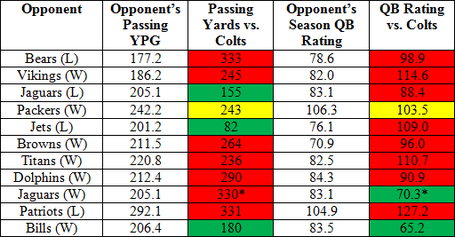 Wow. Not so good in Indy. The Colts failed to hold opponents below their yardage averages in 7 of 11 games and passer rating averages in 8 of 11. Looking closer at the chart, you see that all but two opponents had a passer rating of 85 or more against the Colts.

Not surprisingly, the raw statistics aren't much better. The Colts rank 28th in passer rating allowed (96.6), 21st in yards per attempt allowed (7.4) and 19th in completion percentage allowed (62.5 percent). The Colts also don't offer much of a pass rush threat, as their 23 total sacks ranks them tied for 20th.

Player to watch: Dwight Freeney. Freeney hasn't been as explosive after his move to outside linebacker this season (2 sacks in 9 games), but he's still a beast. He's the biggest threat to the Lions pass offense, especially if Riley Reiff starts in place of Jeff Backus again.

Advantage: Lions +2.5. This is a huge opportunity for the Lions to exploit a major weakness of the Colts. By nearly every measure in the game, the Lions should dominate the matchup. The key will be scoring touchdowns instead of field goals. The Colts are giving up nearly 2 passing touchdowns per game (19 in 11 games). Expect well over 300 yards for Stafford and likely a couple scores. 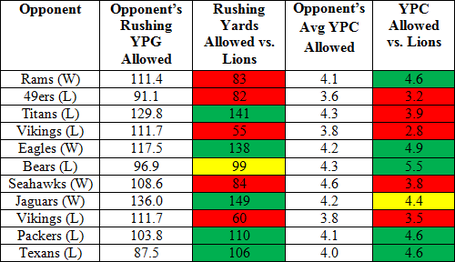 Overall, the Lions rushing game has been pretty average. In both yards per carry and yardage, the Lions have surpassed averages in 5 of 11 games. Their 4.2 yards a carry ranks them 16th, which is pretty impressive without the benefit of big plays. 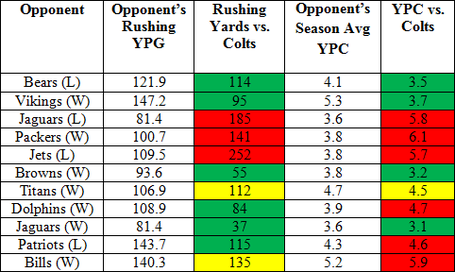 Speaking of average. Though the Colts have held six of 11 teams under rushing yard averages, they've only held four below their yards per carry average. Overall, they are ceding a whopping 4.8 yards a carry (30th). They've given up the fifth-most runs of 20+ yards (11) and the second-most runs of 40+ yards (5). A fair assessment of the Colts run defense is: average, but prone to giving up a big play.

Player to watch: Jerrell Freeman. Heard of him? If I'm being 100 percent honest, I hadn't before previewing this game. But Freeman leads the Colts in tackles and is tied for fifth in the NFL for the overall lead (101). His 6 tackles for loss also lead the Colts. His play has even got some people thinking he should make the Pro Bowl.

Advantage: Draw. It would be great to see the Lions break out with the big plays this week against the vulnerable Colts. And while the Lions have been, at the very least, consistent on the ground, they just don't have a threat to break out a big play. I expect the Lions to total somewhere around 100 yards at about 4.0 a carry. 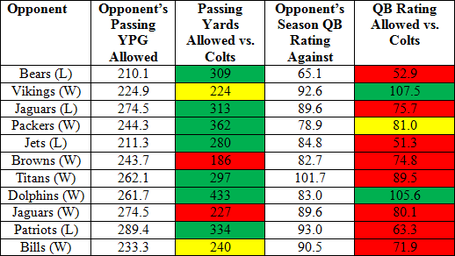 For all the praise that Andrew Luck has been getting this season, the charts don't exactly support the hubbub. Luck and the Colts have failed to surpass passer rating averages of the defense in 9 of 11 games. To his credit, however, Luck has surpassed yardage averages in 7 of 11. This means that the Colts are not shying away from relying on Luck when the game is on the line, and his 7-4 record is hard to argue with. 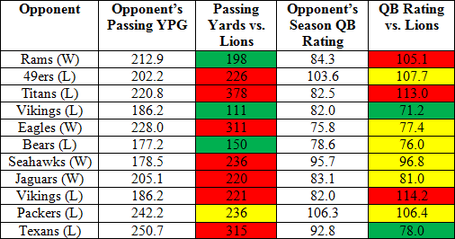 The Lions remain a pretty average pass defense as their overall ranking continues to slide to a more accurate spot. They are consistently giving up an above-average amount of yards through the air but are holding opposing quarterbacks very close to their passer rating.

The Lions rank 23rd in passer rating allowed (92.4) and 28th in completion percentage allowed (65.7 percent), but ninth in yards per attempt allowed (6.8). Conclusion: very bend-don't-break-ish. Their 25 sacks rank a disappointing tied for 17th.

Player to watch: Reggie Wayne. The only man to average over 100 yards a game not named Calvin Johnson, Wayne is still a huge threat in the NFL. Chris Houston has done an amazing job shutting down No. 1 receivers this year, but Wayne will be one of his biggest challenges this season.

Advantage: Draw. Luck will get his yards against the Lions on Sunday, but he won't get them in bunches. Last week, the Lions held the Texans to SIX three-and-outs, and Matt Schaub still managed 315 yards. I expect Luck to surpass 300 yards, as well, but if he continues to heavily rely on Wayne, I think Houston will shut him down enough to force a lot of punts, too. 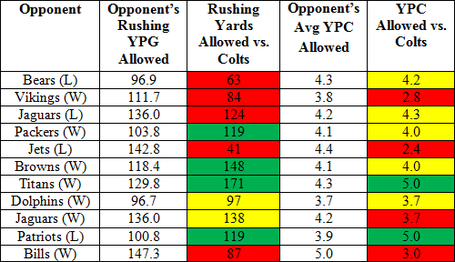 Indianapolis' one-two punch of Vick Ballard and Donald Brown has been nothing that strikes fear in opposing defensive coordinators. The Colts have surpassed yardage averages in just 4 of 11 games and yards per carry averages in 2 of 11. 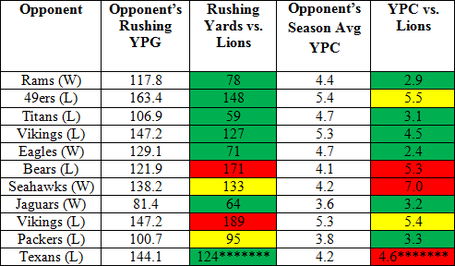 *******DOES NOT INCLUDE PLAY THAT HAPPENED BUT DID NOT REALLY HAPPEN

Detroit's run defense, I believe, is still slightly above average. They've held 7 of 11 below yardage averages and 8 of 11 at or below yards per carry averages.

Their raw numbers are now forever tainted by last week's fiasco, but for completion purposes, they rank 27th in yards per attempt (4.6; it would be 4.37 if the play was called correctly).

Player to watch: Nick Fairley. Fairley remains to be the Lions' best defensive player outside of Houston. Fairley has been disrupting plays before they even start and may be drawing double-teams before you know it.

Advantage: Lions +0.5. The Lions' biggest weakness in this matchup is giving up big plays. However, the Colts don't seem to get many big plays on the ground. I don't expect the Colts to reach the century mark this week.

An emerging star? T.Y. Hilton has been a huge part of the Colts' recent success. In the past 4 games, he's surpassed 100 receiving yards twice, and he has 4 receiving touchdowns. Hilton is also a big special teams threat. He returned a punt for a touchdown last week against the Bills. I just made myself a little sick.

Playoff race. Technically, the Lions are still in it, and I suppose there's a real chance that the Lions would make it with a 9-7 record. But I can't imagine there are many players in the locker room who truly believe the Lions will win out. The Colts, however, are in the midst of an emotional season that has lifted them to a 7-4 record. They currently sit in the first wild card spot, but not comfortably. They are only one game away from being out of the playoffs completely, so this game is essential.

The Lions have a +3 advantage, supporting Vegas' seemingly high line on the game. Despite their records, the Lions clearly have more talent and should be the better team. Of course, that is not how this season has turned out thus far. Still, the Lions have been playing better of late, and I think the wins will start coming in, even if it is too little too late. Lions 31, Colts 20.