Lions video review: Riley Reiff could be the difference this week

Last time the Detroit Lions faced the Minnesota Vikings, Riley Reiff was a non-factor, playing only five offensive snaps. With his role now expanded, he may be the key for the Lions offense to get their revenge this week.

Share All sharing options for: Lions video review: Riley Reiff could be the difference this week

Last time these two teams faced each other, the Minnesota Vikings absolutely stymied the Detroit Lions' offense. The Lions only managed 55 yards rushing (2.8 a carry) and 17 points. As usual, Jared Allen had a big part in that. While he only tallied 0.5 sacks on the day, he also had four tackles, two of which were tackles for loss on running plays.

Riley Reiff only played in five snaps in that game. But the Lions have evolved on offense since Week 4. Last week, Reiff was in for a career-high 33 snaps as the Lions tallied 149 rushing yards on 4.4 a carry. When asked how Reiff's expanded role would change his game plan, Allen replied, "It's not going to change our approach, but they are doing some great things." Indeed, the Lions rushing attack has been much improved with Reiff in the game, but Allen's refusal to adapt could cost him. And I have proof.

In the first matchup between these two teams, Allen was having his way with Jeff Backus and Brandon Pettigrew. This run was particularly embarrassing for Pettigrew. 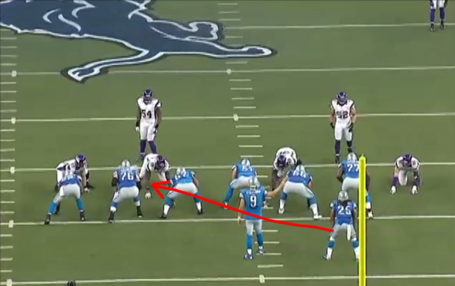 The play is a draw to Mikel Leshoure with the intended hole either between Backus and Pettigrew or Backus and Rob Sims. Either way, Pettigrew must quickly get to his right and block Allen from the inside. It doesn't take long for him to fail. 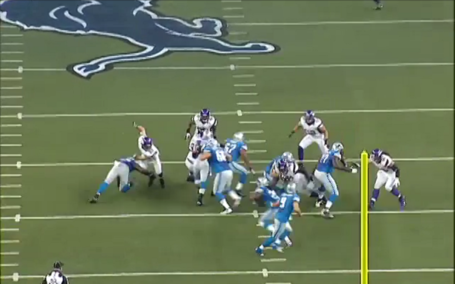 Allen swims past Pettigrew easily and is already in the backfield when Leshoure gets the ball. Stephen Peterman is crossing the field to help out, but with Allen barely impeded at all, he has no shot at stopping him in time. Leshoure loses a yard.

Fast forward to last week. The Lions ran a similar play with two differences: the run was to the other side and Reiff was in for Pettigrew. Here's how it looked: 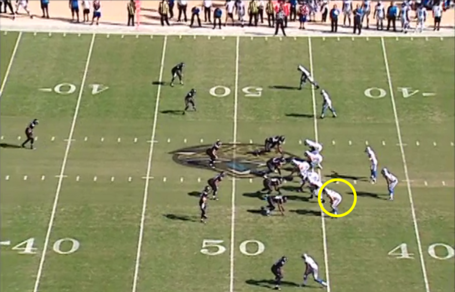 Again the play is a draw, this time to the right. Reiff's job, though, was very similar to Pettigrew's. He must get on the inside of the defensive end to prevent the defender from jumping in the backfield and also provide a cutback lane if things break down on the right. From another angle, we see that Reiff more than excelled at his job. 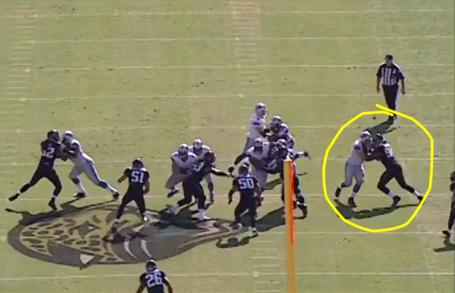 Reiff quickly gets inside, is able to anchor his feet and, as you can see, has his momentum going toward the defender. Switching back to the sideline view, we see that the defender is out of the play and the cutback lane is there, should Leshoure choose it. 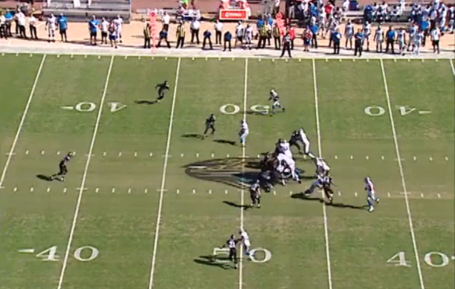 Pretty good for a rookie.

Of course, there is one major flaw in comparing these two plays. Jacksonville's defensive end (Jeremy Mincey) is no Jared Allen. However, Reiff and Allen have faced off, though for only five plays. Most of the time, Reiff was in to help Backus on pass protection. But there was one play in which Reiff was one-on-one with Allen, and he took it to him. 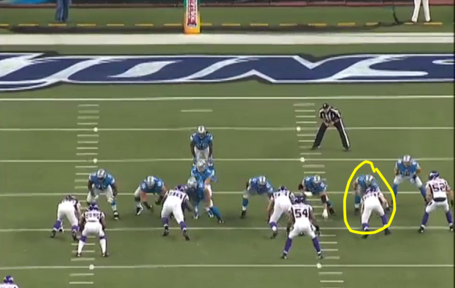 The play is an end-around, design to go right at Allen. Reiff must make sure Allen doesn't get into the backfield or read the play too quickly. Solution? Cut block. Cut blocking Allen is easier said than done. I don't know how many times I've seen Allen see the block coming and jump over it. But Reiff pulls it off to perfection. 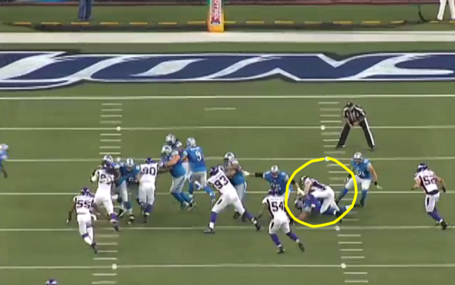 Reiff uses Allen's aggressiveness to the inside against him and cuts him down with ease. This opens up the entire side of the field and takes Allen out of the play completely. 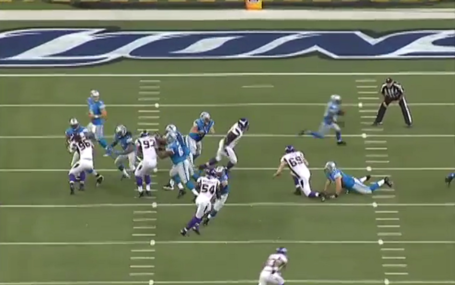 By the time Allen knows what hit him, Titus Young is off to the races. It was a great block and I'm sure it gave Lions coaches the confidence that Reiff can deal with the best of the best.

Now, obviously, the Lions aren't ready to give the reigns to Reiff completely. However, I think the Lions would be wise to use Reiff in run-blocking situations more than tight ends. In Detroit, the Lions' lack of a running threat killed them. However, with Reiff in the game, the Lions have a chance to be more balanced on Sunday, and perhaps, pull off a very important win.