The Detroit Lions head to Minnesota to get revenge on the Vikings. The Vikings defeated the Lions back in September, but the teams have changed quite a bit since, and their identities are much clearer now.

Share All sharing options for: On Paper: Detroit Lions at Minnesota Vikings

The Detroit Lions head to Minnesota to take on the Vikings this week, in what is their biggest game of the season. The Vikings handled the Lions in Detroit earlier in the season, 20-13. In that game, the Vikings scored two special teams touchdowns, and the Lions could only manage 341 total yards and 13 points. The Vikings currently have a half-game lead on the Lions for third place in the NFC North and have the head-to-head tiebreaker. With a win, the Lions would jump the Vikings in the standings and even up the tiebreaker.

The Lions come into this game on a two-game winning streak, while the Vikings are in the middle of a two-game slide. Because of this, the Lions are a slight favorite to win. Do the charts agree?

The Lions pass offense continues to look better on paper than in game. Despite all the struggles we've seen, they have outperformed averages in 13 of 16 categories this year. They now rank first in yards per game, which is pretty believable when you look at the chart. In the previous matchup, the Lions were not able to reach the Vikings' average passer rating allowed, but they cranked up the yardage.

Overall, it's clear that the Lions pass offense, though maybe not as dominant as last year, is still pretty good. They rank 14th in passer rating (86.4), 10th in completion percentage (64.1 percent) and 20th in yards per attempt. The offensive line has been great at protection, only allowing 15 sacks (t-10th), which is pretty impressive considering how often the Lions drop back to pass.

The Vikings pass defense is a mixed bag. It has been poor as of late, allowing opponents to meet or outperform averages in seven of eight categories over the past four games. However, before then, they held three of five below passer rating averages and only allowed one of five opponents to outperform yardage averages.

Going to the raw numbers, it looks like a pretty average unit. They are 23rd in passer rating allowed (91.7), seventh in yards per attempt (6.6) and 20th in completion percentage (63.2 percent). Of course, the Vikings' biggest pièce de résistance is their pass rush. Their 24 sacks are the seventh-most in the NFL.

In their last matchup, they held the Lions to their average yards and below their passer rating average.

Player to watch: Riley Reiff vs. Jared Allen. I wrote a little about this matchup on Thursday, and I'm very excited to see how it plays out. Last time the two teams faced off, Reiff was only in the game for five plays. I have to imagine he'll see the field more this time.

Advantage: Lions +1. The Vikings held the Lions in check last time, but they will be without Chris Cook this week. Cook has four career passes defended against the Lions in three games and was the Vikings' answer for Calvin Johnson. Even though he's not 100 percent, I expect Johnson to take full advantage of Cook's absence. 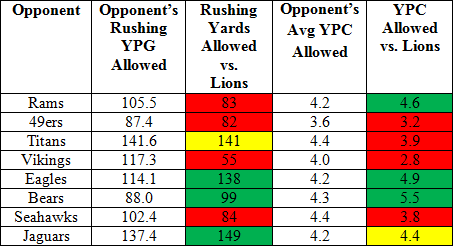 After a slow start, it appears the Lions running game is starting to emerge as something real. They have met or outperformed averages in six of eight categories over the past four games. The one-two punch of Joique Bell and Mikel Leshoure appears to inflict some real damage on opponents.

The raw numbers remain pretty average. They are 16th in yards per carry (4.1) but have the sixth-most rushing touchdowns (10). They remain the only team in the NFL without a rush of 20+ yards.

The Vikings absolutely shut down the Lions last time. Leshoure averaged just 2.0 a carry on 13 carries and had a devastating fumble on his longest run of the game. 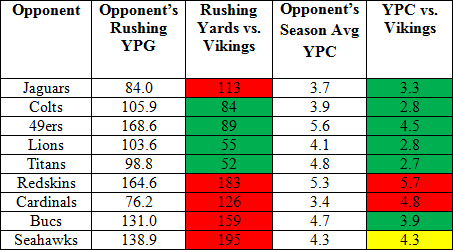 After dominating rush offenses through the first five weeks of the season, the Vikings seem to have hit a wall. Granted, they have played some solid rush offenses in the past four weeks, but Minnesota has still allowed them to outperform averages in almost every category over the past four games.

This has caused the Vikings' overall stats to drop considerably from the last matchup. They are giving up 4.0 a carry (t-7th) and have allowed seven rushing touchdowns (t-18th). Surprisingly, they've given up the sixth-most rushes of 40+ yards (two).

Despite their recent struggles, I think this unit is still very good, likely top 10. Even with the past four weeks, they still rank in the top 10 in yards per carry allowed, and I cannot ignore how easily they held the Lions in check last time.

Player to watch: Chad Greenway. Greenway had 11 total tackles against the Lions last time (seven solo) and leads the NFL in tackles (by 15!).

Advantage: Vikings +1. I can't quite explain the Vikings' recent struggles, but I don't think it will continue for long. They have plenty of talent in their front seven. They shut down the Lions last matchup, and while I think Reiff will provide a spark for the Lions, I don't think the Lions will total more than 100 yards or 4.0 a carry this week. 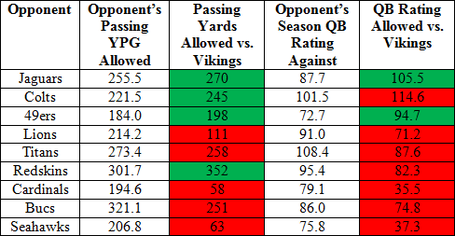 When we last met the Vikings, Christian Ponder had not thrown an interception and was getting praise everywhere he went. Nowadays ... not so much. In fact, he has thrown an interception in every single game since the Lions game. He hasn't outperformed passer rating averages since before the Lions game and has only outperformed yardage average once since.

The Lions pass defense looks pretty average despite their high ranking. Why is that? Repeat it with me: they have yet to face a good passing offense. I know I beat this point to death, but it bears repeating. Detroit has yet to face a top 10 passing offense and has now faced the five worst passing offense (49ers, Vikings, Bears, Seahawks and Jaguars). When I find an anomaly like that, I tend not to give credence to the raw numbers and focus more on the charts.

But to be thorough, the raw numbers are okay. The Lions are ninth in yards per attempt allowed (6.7) but 26th in completion percentage allowed (65.1 percent) and 22nd in passer rating allowed (91.0). Considering their opponents, those are not good numbers. I'd say the Lions pass defense is average, at best.

Player to watch: Kyle Rudolph. Though Rudolph only has two receptions in his past three games, he's likely to emerge as Ponder's safety valve with Harvin out. He's also a big red-zone threat. He leads the team in five touchdown receptions.

Advantage: Lions +1.5. Even though the Lions continue to be banged up in the secondary, the Vikings have it worse. Minnesota already has one of the worst passing offenses in the league, and without Harvin, it's hard to imagine the Vikings putting up significantly more than 200 yards and maybe a touchdown. 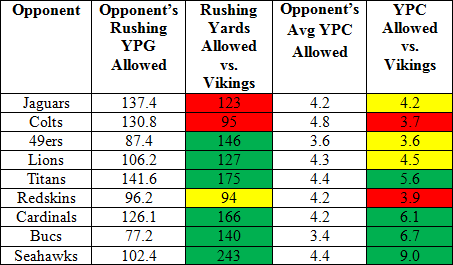 Adrian Peterson is alive and well. He's been tearing up defenses pretty much all season. He leads the league in yards and his 5.7 yards per carry is higher than anyone in the top 10 in rushing yards. He has 11 rushes of 20+ yards, which is four more than anyone else. He is dominant; there's no other way of putting it. 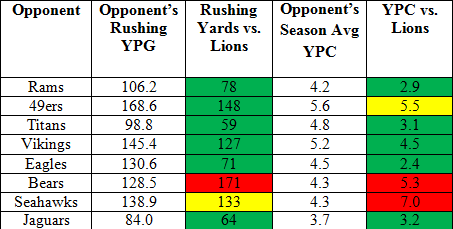 The Lions run defense remains solid. Only one opponent has surpassed their yardage average against the Lions.

Overall, the Lions are giving up 4.3 a carry (20th) but have only given up five rushes of 20+ yards (t-15th). Last time, the Lions actually held the Vikings under their averages, but as you can see from above, the Vikings outperformed the Lions' defensive averages.

Player to watch: Peterson vs. Lions safeties. The Lions are again without Louis Delmas and Amari Spievey. Both are decent tacklers, and if the Lions are going to prevent Peterson from breaking another long one, they'll need solid tackling from Ricardo Silva and Erik Coleman.

Advantage: Vikings +1. This was a well-fought matchup last time. While the Vikings outperformed the Lions' defensive averages, the Lions held the Vikings below their offensive averages. Yes, that is possible. Yes, that is confusing. What that basically means is that both units are above average. But with Peterson playing as well as he ever has and the Lions' safeties vulnerable, I fear that AP will break at least one long run before the day is done.

Special teams. As mentioned before, the previous matchup featured two special teams touchdowns for the Vikings. While Harvin's injury will be a big blow to Minnesota's kick return unit, the Vikings' punt return team proved just as dangerous last time.

Vikings slide. With exception to the running offense, the Vikings have seen a steep decline in their charts over the past two to four weeks. They have dropped three of their last four games, and now their second biggest offensive threat is likely out.

Lions at Vikings: Detroit comes out flat, loses at Minnesota, 34-24