Share All sharing options for: PHOTO: Matthew Stafford Films 'This Is SportsCenter' Commercial

Detroit Lions quarterback Matthew Stafford was in Bristol, Connecticut, earlier this week to film a "This Is SportsCenter" commercial. News of this came from Hairy Dawg, the mascot for the University of Georgia, who tweeted that he and Stafford were set to film a commercial together. (There's a sentence I never thought I would type.)

Radi Nabulsi, who covers Georgia for ESPN, tweeted a picture yesterday of Stafford and Hairy Dawg on the set of the commercial shoot. Check it out:

Looking forward to this ESPN commercial with Matthew Stafford and #UGA's Hairy Dawg. Wish I could have written script. a7.sphotos.ak.fbcdn.net/hphotos-ak-ash… 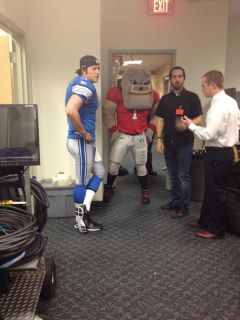 While in Bristol, Stafford stopped by the set of SportsCenter for a brief interview, which you can check out here. During the interview, he talked about a number of topics, including his expectations for next season and playing with Calvin Johnson.