Welcome back, everybody. I apologize for my three-week hiatus, but I guess that's what the first playoff appearance (and loss) in 12 years will do to us die-hards. For the second consecutive year, I have decided to preview the biggest game of the season the only way I know how: On Paper.

For those of you unfamiliar with my style of previews, last year's Super Bowl post has an overview of the purpose of these previews and a guide to the charts. Here's a snippet:

"On Paper" focuses on a few important stats to predict the outcome in many phases of the games. The key aspect of my previews is a focus on past game performances but taking into account the strength of the opponent. For example, a team that allows 270 passing yards in a game is seemingly having a bad day. However, if that game is against the Saints, who average around 277 passing yards a game, the defense actually did a somewhat good job holding the Saints below this average. These previews focus on such statistics that mostly go unnoticed.

The only difference from last year's style is that I have now added yellow to my charts. A yellow cell signifies that the team performed within 5% of the opposition's average.

Anyway, I will try and add some interesting statistics along the way that you can use to impress the other people at your Super Bowl party. Enjoy. 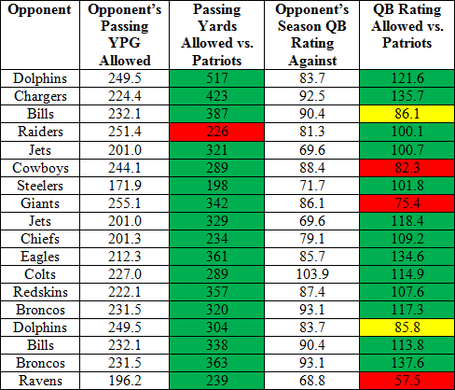 As you can see, Tom Brady and the New England offense have only been held below the defense's yardage average once this season. As a result, Brady put up a whopping 5,235 yards in the regular season, good for second-most all-time.

In addition, Brady has been very efficient throwing the ball. He was only held below defensive passer rating averages in three games and finished the season with a 105.6 passer rating (third overall). Despite the lack of a classic "number one" receiver, the Patriots lead the league in passing plays over 20 yards (72) and rank fifth in plays of 40 yards or more (14).

Brady has put up fairly modest touchdown and interception numbers (by his standards). His 39 regular season touchdowns is his second most, but is way behind his career-best 50 touchdowns in 2007. He threw 12 interceptions this year, three times as many as he threw last year. However, "modest" Brady is as good as any other quarterback out there. 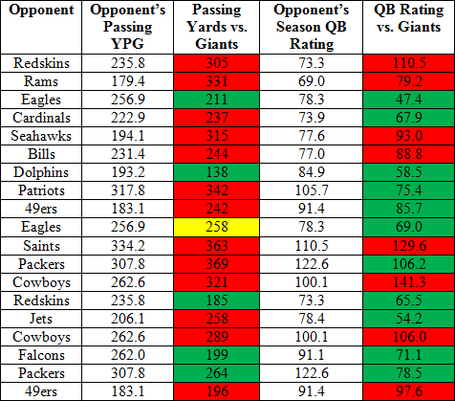 The Giants pass defense looks weak when looking at yardage stats. Opponents surpassed their yardage averages in 13 of 19 games against the Giants. But when looking at a team's defensive performance, it is important to look beyond yardage, which is why passer rating is always included in these charts. The defense looks a lot more impressive looking at the right side of the chart. The Giants held opponents below their passer rating average in 11 of 19 games. The results suggest that the Giants forfeit a lot of yards, but are somewhat opportunistic and prevent touchdowns and force interceptions.

Looking at the raw stats, we see this is true. The Giants' 20 interceptions rank them tied for sixth in the NFL (although their 28 passing touchdowns allowed is seventh-most). As a team, the Giants are allowing a passer rating of 86.1, which ties them for 20th in the league. Overall, it's fair to say the Giants' pass defense is average or slightly below average.

It's clear that this matchup favors the Patriots, but the significance of this advantage depends on two unknown factors. First is the health of Patriots tight end Rob Gronkowski. Gronkowski led all tight ends in the regular season with 17 touchdowns, and placed second in yardage (behind Jimmy Graham). He is the leading Patriots receiver in the postseason in receptions, yardage and touchdowns. Gronkowski has been the focus of many during the last few weeks, but his importance cannot be overstated. Just look at his postseason stats compared to everyone else on the Patriots:

This is coming from a team that is known for its ability to spread the ball around. Gronkowski has been essential to this offense lately. The latest injury reports suggest Gronk will play but his effectiveness is still unknown.

The second major factor of this matchup will be the Patriots' ability to keep the pocket clean. The Patriots have only allowed 32 sacks (ninth-best), but the Giants boast the third-most sacks in the league with 48. When the two previously met, the Giants got to Brady twice and eventually won the game. Therefore, I am only giving the Patriots a modest +1.5 advantage in this matchup. 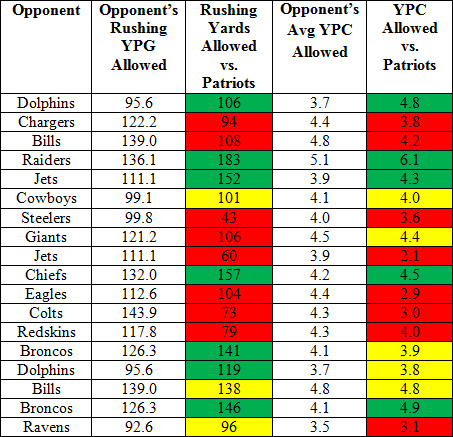 The Patriots are pretty much average across the board in run offense. They surpassed yardage averages in seven games, met averages in three, and were held below in eight. In yards per carry averages, they surpassed in five games, met in five and were held below in eight. When it comes to overall stats the Patriots are right around the league average in YPC (4.0, 21st). Interestingly, the Patriots are third in rushing touchdowns (18) but are not a long-play threat. They only have five rushing plays of 20+ yards (31st) and no rushing plays of 40+ yards (obviously, last). In other words, they are an effective red-zone rushing team but aren't a threat to break a long one. 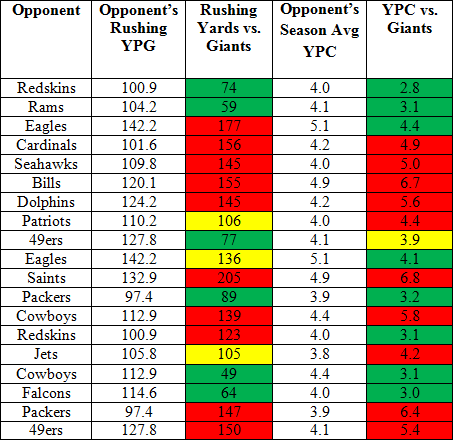 The Giants counter with a similarly underwhelming run defense. They've held six of 19 opponents below yardage averages and only eight of 19 below YPC averages. In the past two weeks, in particular, the Giants have had a tough time stopping the run, allowing a combined 297 yards and 5.8 a carry.

Overall, I don't expect the Patriots run offense to take over this game by any means. However, when the Patriots get into Giants territory, they will not shy away from trying to punch it in against the Giants' front four. The Giants have allowed the seventh-most rushing touchdowns (15) and I wouldn't be surprised to see them allow another one or two on Sunday. But a touchdown isn't enough to give this advantage to either team. Draw. 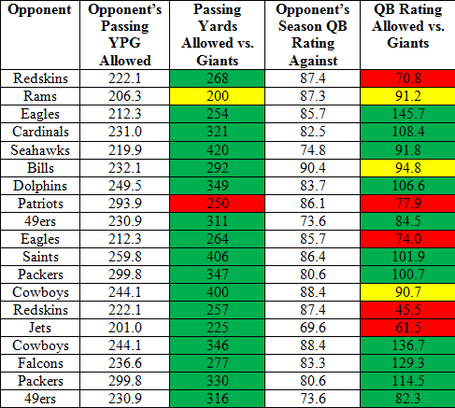 I know Lions fans don't want to hear it, but Eli Manning had himself a heck of a year (dare I say ... Pro Bowl worthy ... please don't hurt me). Only one opponent managed to hold him below their season average in yardage. But that opponent was ... the New England Patriots, who were the only team to hold the Giants below averages in both yardage and passer rating.

But you cannot deny how impressive the Giants pass offense has been. They rank sixth in passer rating (92.9), third in yards per attempt (8.4), and sixth in touchdowns (29).

Of course, a lot of Eli's success has been as a result of Victor Cruz's breakout season. Cruz finished the season third in receiving yards (1,536) and sixth in touchdowns (nine). He has been just as effective in the postseason, accumulating 244 yards (though he has yet to reach the end zone). 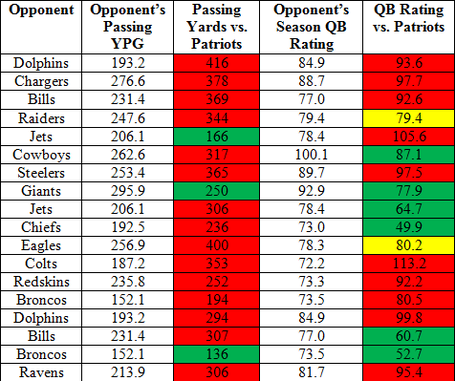 The Patriots pass defense has garnered a lot of attention for being especially bad. Upon first looks of this chart, it appears to corroborate that story line -- all but three opponents surpassed their passing yard average. But, once again, looking at the passer rating column we see that the Patriots pass defense actually held nearly half of their opponents (eight of 18) at or below their passer rating average.

In fact, the notion that the Patriots' pass defense ranks as one of the worst in history is ludicrous. They aren't even in the bottom five this season. They rank 23rd in completion percentage allowed, 22nd in touchdowns allowed and 20th in completion percentage allowed. For all of the heat that the Patriots are taking, they actually have allowed the exact same passer rating as the Giants. Let me repeat that: The New England Patriots defense, which some are calling the worst in NFL Super Bowl history, have allowed the EXACT SAME passer rating as the New York Giants. If you really think the Patriots have one of the worst pass defenses in league history, let me introduce you to the 2008 Detroit Lions.

That being said, the Patriots pass defense is below average at best. With the Giants pass offense rolling, it's easy to see who has the advantage in this matchup. Though the Patriots have a better pass offense than the Giants, New England also has a worse pass defense. The Giants get a slightly bigger advantage because there are fewer questions surrounding their offense (and injuries) at this point. Giants +2.0. 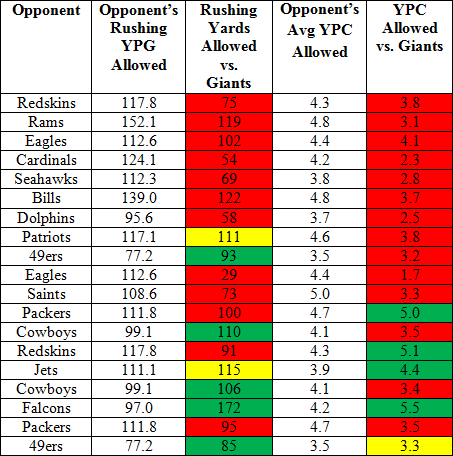 Like their season, the Giants run offense has been a story of two different halves. In the first eight games, the Giants failed to surpass averages in yardage or YPC in any game. However, in the past four games, the Giants managed 458 yards and a respectable 4.0 a carry (against three top 10 run defenses, no less). Their running game has sparked at the right time, but it remains to be seen whether they can keep it up against the Patriots. 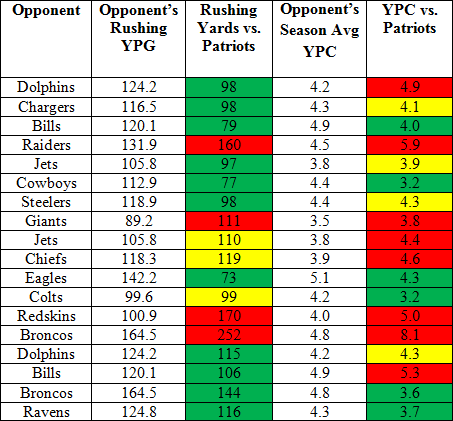 The Patriots have held 11 of 18 opponents below rushing yardage averages and six of 18 below YPC averages. Overall, they've been an average run defense. They rank 24th in yards per carry allowed (4.6) and 19th in rushing touchdowns forfeited (13). They've given up 10 rushes of 20+ yards (t-10th) and one rush of 40+ yards (t-7th). In other words, the Patriots run defense doesn't win or lose the game for them.

I think it is fair to say that the Giants will probably perform somewhere near their rushing averages this game. Though they rank last in total yardage, they seem to have hit their stride as of late. Therefore, I don't expect the Giants to abandon the run at any point in the game, and they will probably get around 85-95 yards total. In other words, this matchup is a draw.

The total advantage comes out Giants +0.5. Before I started compiling the data for this game, I couldn't figure out who I'd pick in this game. I have no allegiance to either team (in fact, both of these teams are among my least favorite in the league). Upon all of this research, I'm still very unsure of myself. The teams are incredibly similar. Both have top five passing attacks, weak pass defenses and rushing games that are somewhat average and inconsequential.

I'm not one for the "hot team" argument, but it's hard to deny how much better the Giants are playing now than they have all season. Granted, the Patriots are also riding a 10-game winning streak. But the charts are the charts and it's all the evidence I need to make a pick on an extremely close matchup. Giants 27, Patriots 24.