Calvin Johnson Will Be On Cover Of Madden 13

Share All sharing options for: Calvin Johnson Will Be On Cover Of Madden 13

After seven weeks of voting and nearly 20,000,000 total votes, it was revealed today that Detroit Lions wide receiver Calvin Johnson will grace the cover of Madden 13. Johnson took down Carolina Panthers quarterback Cam Newton in the finals of the Madden 13 cover vote to win the honor by securing 52 percent of 651,736 votes.

The winner of the cover vote was revealed on ESPN's SportsNation. The image of the cover appeared in Times Square during the announcement, and afterward, Johnson got to pose with the cover: 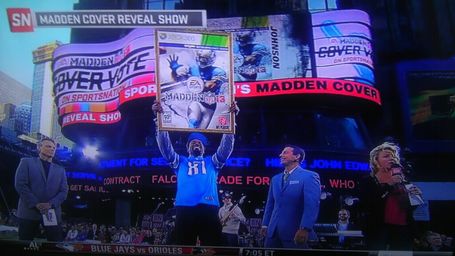 Johnson is the second Lions player to appear on the cover of the Madden NFL video game franchise. Back in 1999, Barry Sanders was on the cover with John Madden. Sanders retired that year, and in many people's mind was the first to suffer the "Madden curse." I'm sure talk of the curse will linger throughout the summer and upcoming season, but like Nate Burleson said, if anybody can break it, it's Megatron.