Share All sharing options for: Alphonso Smith Says Lions' Secondary Only Had Two Bad Games In 2011

The 2011 season was a bit of a roller coaster ride for the Detroit Lions' secondary. Through the first half of the season, the Lions' defense was doing a pretty good job of defending against the pass. It didn't last, though. As the Lions started losing some games and injuries started piling up, the numbers slowly began to get worse for the pass defense. Finally, by the 11th game of the season, the bottom fell out and the numbers for the pass defense became consistently bad.

The exclamation points on the Lions' struggles against the pass later in the 2011 season came against the Green Bay Packers in Week 17 and the New Orleans Saints in the playoffs. Matt Flynn and Drew Brees had their way with the Lions' secondary, and both quarterbacks put up big numbers. The pair of losses were by far the worst games of the season for the secondary, and if you ask cornerback Alphonso Smith, he thinks they were the only bad games for the secondary last season.

"The fact of the matter is you had two bad games," Smith said. "The last regular season game against Green Bay when Matt Flynn had a field day, which was our fault. You can't really fault anyone for the criticism of that. Then you had arguably the best quarterback in the league last year (Brees) who lit us up in the playoffs.

"Other than that, you can go back to the San Diego Chargers and we gave up 200 yards against them (Philip Rivers threw for 299 yards)? That was a top-notch passing attack. You had Minnesota who came in. We did solid against Oakland."

There's no arguing the fact that the Lions' secondary was awful in the final two games of the season, and there's no arguing that injuries played a big part in that. Still, this sounds like some serious revisionist history to me. The Lions' secondary had issues against the pass before the final two games of the season, right? In a nod to "On Paper," let's consult the chart: 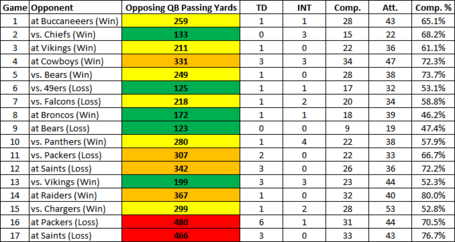 As you can see, aside from a 331-yard performance by Tony Romo in the fourth game of the season, there's a lot of green and yellow through the first 10 games. Even when the Lions allowed some big numbers, they balanced things out by picking off the ball (three interceptions against the Cowboys, two against the Falcons and four against the Panthers, for example).

The Thanksgiving game against the Packers is when things started to go downhill. That is when Louis Delmas (and others) went down with an injury, and the secondary just seemed to fall apart. The Lions allowed 307 passing yards on Thanksgiving, 342 a week later against the Saints and 367 against the Raiders. There was a solid performance against the Vikings' quarterback combination of Christian Ponder and Joe Webb (against the pass, not the run), and the Lions played pretty well against Philip Rivers and the Chargers. Then things just went straight downhill with two stinkers against the Packers and Saints to close out the season.

Yes, you can use advanced stats to come up with a better way of evaluating what is a good or bad performance, but if you keep it simple, there were a lot of bad games for the secondary in the final seven weeks of the season. The consistently good outings disappeared, as you can see by this graph of passing yards allowed by game: 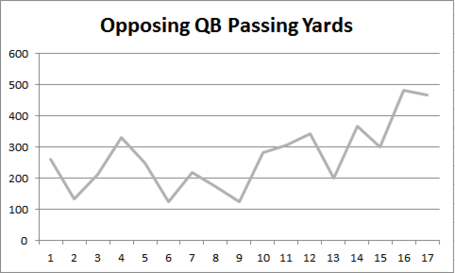 It certainly wasn't all bad for the Lions' secondary in 2011. In fact, at the start of the season they had a few really good games. The problem was that later in the year, things broke down for the secondary. While poor performances by the defensive backs didn't always result in the Lions losing, it certainly didn't help matters. And although it wasn't the only reason the Lions were eliminated from the playoffs, allowing Brees to torch them did play a big role in the Lions losing that game.

In the end it obviously doesn't matter because what happened in 2011 is in the past, but to say that the Lions' secondary only had two bad games last season is inaccurate.