Share All sharing options for: Caption This: Martin Mayhew Edition

Toward the end of Friday night's game, FOX's Thom Brennaman and Brian Billick started talking about the job Detroit Lions general manager Martin Mayhew has done to rebuild the franchise in just a few short years. While they were talking about Mayhew, the camera shifted to a shot of him on the sideline. It gave us this screenshot, which seems like a perfect picture for our latest "Caption This" post: 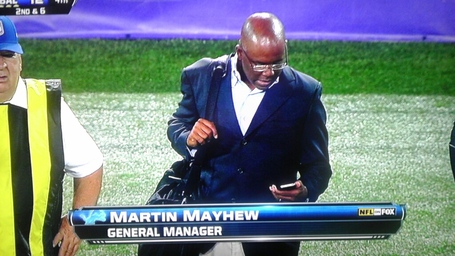 My caption: "Who shall I Mayhew tonight?"

Leave yours in the comments and rec your favorites.