Despite almost losing against the St. Louis Rams on Sunday, the Detroit Lions played a pretty solid game. The exceptions, of course, were Matthew Stafford's three crucial interceptions that nearly cost the Lions the game. Most were shocked by Stafford's seemingly terrible decisions and are now wondering if there's cause for concern in the future. Well, let's look at the tape and break down where Stafford went wrong.

Interception No. 1, 1st and Goal at Rams' 3-yard line (Watch the play here)

After the game, Jim Schwartz said that Stafford was just trying to fit the ball into too small of windows on his interceptions. On Stafford's first pick, we see exactly that: 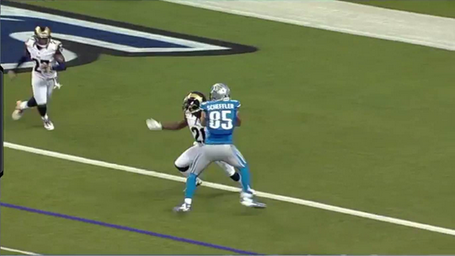 This is the moment right before Stafford lets it go. The throw is meant to be a back shoulder throw, but as you can see, there's absolutely no way to get the ball to Tony Scheffler's back shoulder without going through Janoris Jenkins. Scheffler deserves some criticism for not using his clear physical mismatch to get some separation, but Stafford was seemingly going to throw this ball no matter the coverage. In the red zone, Stafford needs to be more careful and throw this ball away, especially on first down.

I have to give Rams linebacker Jo-Lonn Dunbar a lot of credit on this play. He read Stafford perfectly and made a great break on the ball. 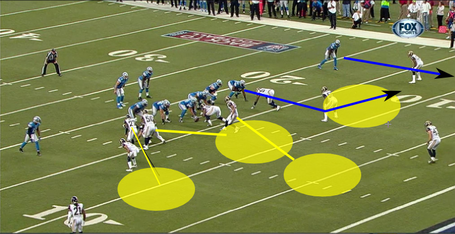 The Rams are playing zone coverage, and I think Stafford knows it. The problem here, again, is Stafford believing he can throw a cannon to Brandon Pettigrew before the linebacker makes his break on the play. Part of the issue is Stafford's eyes. He never takes his eyes off Pettigrew, giving Dunbar a pretty clear idea of where the ball is going. This is a very aggressive move by Dunbar, and if Scott Linehan had called a double-move play, the linebacker would have been in big trouble. But his instincts paid off, and the Lions blew another red zone opportunity.

Of all the interceptions, I find this one the most concerning. The first two interceptions, though crucially in the red zone, were the result of Stafford trusting his arm too much and not being safe with the ball. Both of those are things he will learn from. He's still only 24.

But on this play, Stafford just misreads the (well-disguised) defense. Here is how Stafford is reading the play: 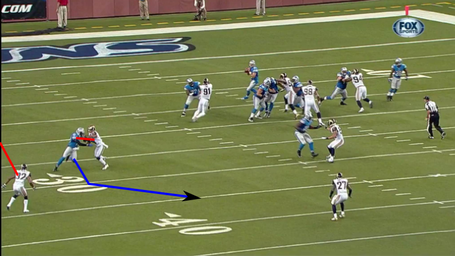 It looks like the Rams are in man-to-man coverage, with Cortland Finnegan on Pettigrew, who is cutting over the middle, while Calvin Johnson (just off-screen) is running a comeback route. Stafford believes that Pettigrew will draw the defender inside, leaving Johnson wide open, given that the other Rams' defender is ceding him a big cushion.

But here's what is actually going on: 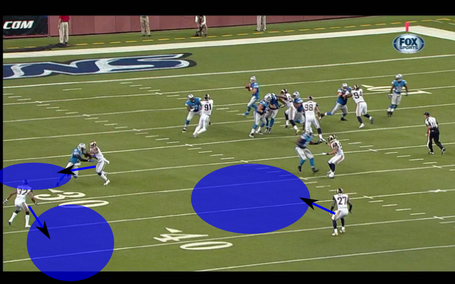 Finnegan is not in man coverage, but rather short zone. Finnegan is simply disrupting Pettigrew's route on his way to his zone. During the broadcast, the announcer claimed that Finnegan "leaves his man." That is inaccurate. Look closely at this GIF.

Finnegan starts heading to his zone before turning his head toward Stafford. He is not reading Stafford's eyes, he is simply heading toward his zone. Finnegan's physical play on Pettigrew not only disrupts his route, but disguises his coverage, and Stafford takes the bait. Pick-six.

Overall, I don't think there's much reason for concern. Stafford will probably continue to be aggressive with his throws, but I'm sure Jim Schwartz will have a talk with him about his play in the red zone. Also, all of his interceptions were on first down, which can't continue to happen. But, Stafford is still young and will obviously learn from these mistakes. The misread was unfortunate, but a lot of credit goes to Finnegan for his excellent play. Things won't be any easier against the 49ers next week, but it's probably a good thing that Stafford made these mistakes early so he can learn from them before heading to San Francisco.