The Detroit Lions gave their fans some excitement in week 1 after edging out the lowly St. Louis Rams who went 2-14 a year ago. Matthew Stafford threw three picks in the first half, but looked like the 2011 player in the 4th quarter leading the Lions on two 80 yard drives.

Matt's stat line: 32-48 (66%) 355 yards 1 TD 3 INT. Part of his early struggles can be caulked up to the Rams defense keying on his tendencies, similar to a pitcher tipping his pitches. The Lions play calling and aggressiveness were fighting each other in the first half, the calls were too conservative and predictable (short out routes) and some of Stafford's passes were being forced which is the recipe for jumping routes for 3 INTs with a pick six. This CANNOT happen against a team like the 49ers who Detroit plays Sunday night. The coaching staff made the right adjustments in the 2nd half and it helped, Stafford worked the field with precision and poise leading the Lions to another comeback. In Stafford's young career, he has led his team to 7 game winning drives. 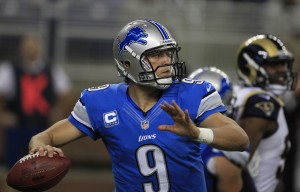 Three INTs is unacceptable especially two in the red zone, but the solid 4th quarter, which matters most, puts the grade on a curve.

Kevin Smith carried the ball 13 times for 62 yards with 1 TD plus 4 catches for 29 yards and a game with TD reception. Joique Bell added a 1 yard score in the 1st half. The Lions running game averaged 4.6 yards a carry and did well enough to keep the Rams defense honest. As everyone knows, Detroit's offense is predicated on the passing game and if the running game can keep that yard-per-rush average around 4.5 then there is enough balance to open up passing lanes.

No huge performances here and only a couple runs over 10 yards (Titus Young had a rush for 11 yards), so there is a lot of room for improvement. Mikel Leshoure will help when he gets back from suspension. 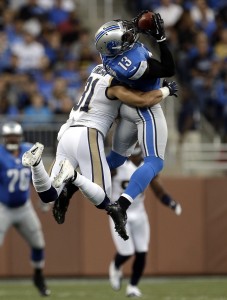 The pass catchers played okay, but there were way too many drops in key situations to let this group off the hook. Calvin Johnson had 6 catches for 111 yards, but couldn't find the end zone. Nate Burleson had a great game with 6 catches for 69 yards. He played physical and took it to the defense after the catch. He had a big reception in traffic over the middle on the Lions final drive. Brandon Pettigrew had the most target with 10, but could have hauled a TD, but let it bounce out of his grip. Titus Young was not a factor during most of the game and it didn't help that he was call for a personal foul after head-butting Janoris Jenkins. He was benched for the rest of the 1st half.

Overall they played solid when it counted, but too many drops kills drives and momentum.

This patched up group was a pleasant surprise. Pass coverage was solid only giving up 198 through the air. The only big play was Sam Bradford‘s 23 yard TD pass to Brandon Gibson over rookie Jonte Green who was in after fellow rookie Bill Bentley went out with a concussion. Recently acquired Drayton Florence a.k.a. D-Flo played well without a lot of practice time with this unit. The safeties didn't give up any big plays and did well in run support helping limit Steven Jackson to 53 yards rushing.

Too many chuck of yards given up on the Rams final drive that took the lead, but Chris Houston should be back for week 2. And as of now I wouldn't count on Louis Delmas being back just yet so Erik Coleman and John Wendling must keep rolling.

This unit played great in both the running and passing game. They filled gaps and put big hits on Steven Jackson in which he only yielded 2.5 yards a carry. The TEs for the Rams did not factor in the passing with only 3 catches for 36 yards. Outside linebackers DeAndre Levy and Justin Durant were flying all over the field.

What a difference a year makes, the communication between this group is vastly improved after having a full training camp under their belt.

The DTs led the way with constant pressure resulting in 3 sacks by Ndamukong Suh, Nick Fairly, and Williams, who also recorded a forced fumble. Constant pressure was put on Bradford who never felt really comfortable in the pocket. Running plays were constantly blown up at the line forcing Steven Jackson to improvise limiting his explosiveness.

The only caveat is again the final drive by St. Louis in which the pass rush pressure was held in check allowing Bradford to pass easily down the field.