My Reunion With Candlestick Park

Share All sharing options for: My Reunion With Candlestick Park

Sunday was not the first time I watched the Detroit Lions take on the San Francisco 49ers at Candlestick Park. A mere three years ago, I had traveled with (mostly) the same set of guys to watch the 2-12 Lions take on a 49ers team that was basically out of the playoff race. I had hoped to catch my first live glance at rookie Matthew Stafford, thinking that because they hadn't placed him on IR yet, there would still be hope to see our future savior. That never came to fruition. Instead, I was treated to a mostly forgettable game, in which the dynamic duo of Daunte Culpepper AND Drew Stanton combined for zero touchdowns, 181 yards and three interceptions. Not a fun day.

But Sunday was going to be different. It was my reunion with San Francisco and Candlestick, having not returned since that fateful afternoon three years ago. This year, I was the fan of a good, possibly great team, and I couldn't wait to show it off to all the unsuspecting San Franciscans. I wanted to make sure everything was perfect, so I started the weekend early and by 9 a.m. on Friday was en route to the Bay Area via Los Angeles.

Things got off to a bit of an ominous start when our scheduled six-hour trip ended up taking nearly eight, but nevertheless I was there, and I was pumped. 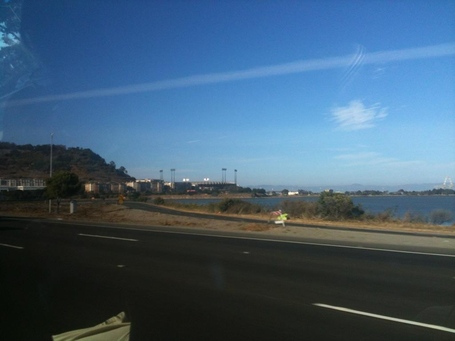 The night was spent hopping around San Francisco's excellent selections of restaurants and bars (including a wonderful Chinese restaurant in the Mission District, aptly named Mission Chinese). The highlight of the night was entering a fairly standard sports bar sporting my Lions winter hat and the bouncer taking particular offense. "I don't know if I can let you in," he quipped jokingly. "You've seen our defense, right?" I simply smiled and chuckled. "Just wait until he sees us now. We're nothing like we were back in '09," I thought to myself.

"Who you got that's gonna beat us?" he insisted. Finally having been baited just enough, I turned back as I entered the bar, "At least we have a QB!" I shifted back toward the bar, happy with my walk-off statement, even if I didn't truly believe the words I was saying (Alex Smith is legit).

The next day was mostly spent bar hopping while attempting to find a college football game worth watching (there weren't any). It was hard to focus anyway; the day was now merely hours away and even the disgusting sight of a man in a University of Michigan hat trying to hit on a girl in an Ohio State jersey couldn't hold my attention for more than a few moments. (This actually happened, and had my phone not been on the fritz, I'd have photographic evidence.)

Then the morning came. The butterflies in my stomach were my alarm clock, rustling at 8 a.m. despite my late Saturday night. After dutifully donning my Louis Delmas jersey, I headed to a random bar to catch the early games. I walked the streets nervously, expecting to draw the attention and ire of Niners fans. But the trek went without a hitch. Surely, as I took my first steps into the seedy little bar, I was going to go head-to-head with a couple Niners fans already two drinks deep, just looking for someone to verbally abuse. I was met with no one. An empty bar with six glowing TVs full of the morning games. The bartender, oblivious to the upcoming event, asked me what game I wanted to watch, probably thinking I wanted to watch the game of whatever jersey I was wearing. "All of them," I said with a little relief but mostly disappointment. 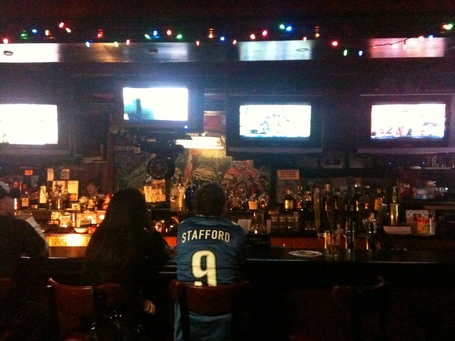 After watching Stephen Gostkowski blow it for the Patriots, I headed with my group to Candlestick, arriving a good three hours before kickoff. Too full of adrenaline to properly tailgate, I spent most of my time pacing and checking Twitter, hoping that Jim Schwartz had just penciled Chris Houston into the starting lineup. As the bad news finally reached my fingertips, I sought out a football to keep my anxious hands busy. The bad news continued: I had forgotten it. 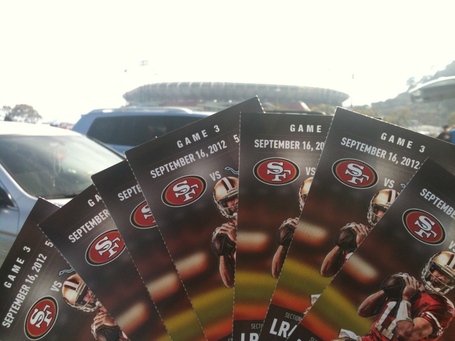 Yes. I take this same picture every time I go to an away game.

Nevertheless, I mentally covered and it was just about time to head to the stadium anyway. Making sure to give us ample time for long lines at security, I managed to reach my seats a good 25 minutes before kickoff, grabbing some free swag (that I didn't really care for) on the way.

Our seats were magnificent, closer than I was last year in the black hole. I looked around trying to gauge the level of abuse I'd be taking in the next three hours. But 10 minutes from kickoff and the place was still only about half-full. It was the Niners' nationally televised home opener and I was awaiting the grand spectacle. It never really came. After a lame 2011 video montage that failed to properly capture the overflowing awesomeness that was their playoff game against the Saints, and a national anthem devoid of a flyover or any impressive pyrotechnics, I was a bit underwhelmed. 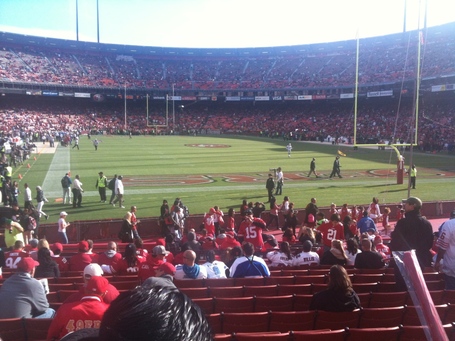 15 minutes before kickoff. Who fills their stadium slower than the Niners? Noooooooobod-ay!

I shook it off and focused my attention on the game at hand. After all, that was what I was here for, and I couldn't wait for everyone to see how much we had changed in just three years. Three minutes into the game and that ship had sailed.

The rest of the game, I stood quietly as my Lions died a slow death on the field. In the one moment of hope, a third-and-14 for the Niners, with the Lions down only eight, I jumped on the opportunity to finally say something that wasn't an under-the-breath curse. "Awfully quiet around here. Y'all nervous?" I badgered in a rare moment of cockiness. Expecting to get a couple death-stares from fans around me, I was met with nothing. No retorts, no glares, nada. It didn't surprise me when the Niners converted and no one decided to throw it back in my face.

When the Lions' failed onside kick attempt was easily recovered by the Niners, I was ready to head to the car. But my friends insisted we stay for the handshake. I can still feel the sting in my ocular cavity from the eye-roll that followed. Then it hit me. The people in the stands that day weren't there for the much-anticipated matchup between two of the NFC's finest. They were there to see what might happen. 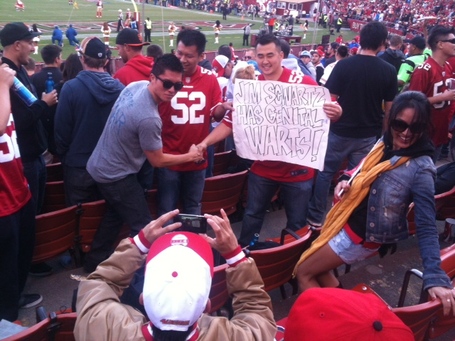 Maybe, but Jim Harbaugh has rabies.

They were there to see two grown men with a "history" face off once again. The game was just the undercard to the main event. Harbaugh vs. Schwartz. I left anyway, knowing that most of the people around me had just wasted their money on a fight that wasn't happening.

The seven-hour drive back to Los Angeles was one I'd never care to take again. My mind too muddled to write and my body too angry to sleep, I was left to stare off into dark, empty freeway.

Like most reunions, this one failed to meet my expectations. I was hoping to shed memories from 2009. I was hoping to show we were a changed team. I was hoping to boast to San Francisco like I had to Oakland last year. But as I sat in the back seat of my friend's SUV on my way out of the stadium, my face aglow from the surrounding brake lights, I turned to see a fellow Lions fan in an adjacent sedan. When our eyes met, I pursed my lips and gave him a solemn nod, acknowledging our shared disappointment. Maybe our 10-year reunion will go better.