Share All sharing options for: Lions Video Review: Injuries To Secondary Starting To Take Their Toll

Obviously, the biggest concern at the beginning of the season was the Detroit Lions' secondary. When Chris Houston was injured in the preseason and Bill Bentley suffered a concussion in Week 1, things went from bad to worse. At safety, things were no better. Louis Delmas had surgery in August and hasn't seen the field yet this season, while youngster Amari Spievey can't manage to see any significant playing time. Against the San Francisco 49ers, these problems came to the forefront and caused the Lions to struggle in crucial circumstances.

Unfortunately, the man in my cross-hairs right now is John Wendling. The guy is a special teams stud, but on Sunday, he proved he won't be ready to crack the starting lineup for the defense anytime soon. He made three bad mistakes against the Niners (two of which I'll break down) and all were devastating.

Wendling is lined up in man coverage on Michael Crabtree. Wendling struggled mightily with his footwork, causing him to be badly out of position on this play. 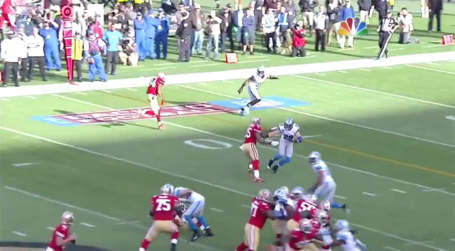 At the moment of Crabtree's break to the outside, Wendling's hips are turned in. Wendling is guessing the route will be over the middle. He guesses wrong. Having to turn his body all the way around, he is nowhere close to Crabtree when the ball is released: 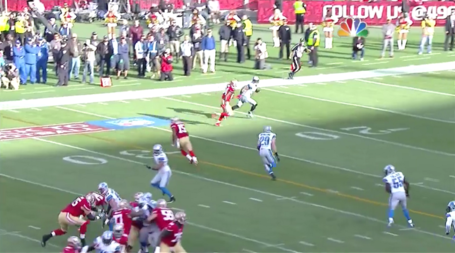 In a particularly embarrassing screenshot, we see that Wendling doesn't even have his body facing the play. He's had to turn his back on the play just in an attempt to catch up with Crabtree. The result is a big 17-yard gain, putting the Lions on their heels early. Oh, and on the next play, he underestimates Vernon Davis' speed and lets him run right by him for a touchdown. Not pretty.

In what was a crucial play for the Lions defense in order to get the ball back for the offense, Wendling's hesitation cost the Lions big. The play was masterfully designed to counter soft defenses, which the Lions were obviously in, given the circumstance. 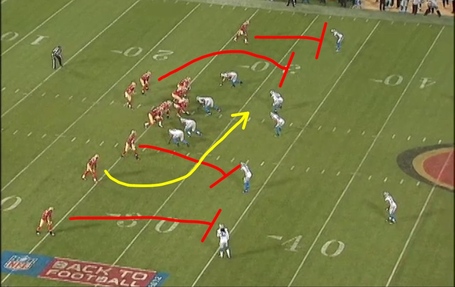 All of the 49ers receivers, and Frank Gore, go out to block on this play, with exception to the intended target, Crabtree. The Lions are in their nickel package (5 DBs, 2 LBs) and are in fairly deep zone coverage, with two deep safeties (Wendling is just off screen at the top). At this point, things look promising, as the 49ers will only have four blockers against seven defenders in zone. When Crabtree catches the ball, things have taken a turn for the worst: 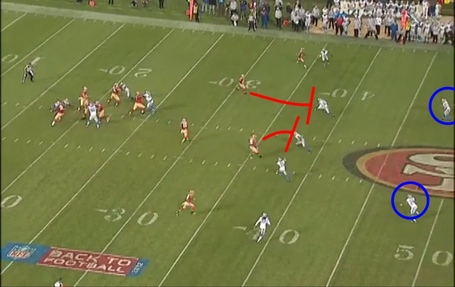 The two Lions corners at the bottom of the screen are already too far away to catch Crabtree in time and the two linebackers are about to be wiped out of the play by the downfield blockers. The key here, again, is the safeties. As you can see, both are about five yards deeper than they were at the snap. Erik Coleman reads the play fairly quickly and is making his break toward the ball. Wendling, however, is still backing up slightly. This failure to read the play quickly costs the Lions the extra two yards they desperately needed to force a fourth down.

On a mistake like this, it's hard not to imagine Delmas in his place, and given Louis' instincts, you'd have to believe he would have made the play here and given the ball back to the offense.

Things are looking up, as it looks like the Lions are getting Chris Houston back this week and could have Bentley back as well. But until Delmas is back in the starting lineup, there's reason to worry.