The replacement officials mistakenly marked off a 27-yard personal foul penalty on the Lions in their game on Sunday against the Titans, giving Tennessee 12 free yards.

When the replacement officials first started working NFL games at the start of the preseason, I was admittedly not all that concerned. I figured that since the regular officials make so many mistakes, there wouldn't be that noticeable of a difference. Boy was I wrong.

During the preseason and the first few weeks of the regular season, it's become extremely obvious that the replacement officials aren't cut out for the job. It's not that they are blowing egregious calls in every game, but rather that they just aren't doing a good job of running things. The replacement officials' biggest problem is in administering the game. It shouldn't be difficult to keep track of when a quarter ends (like last week in San Francisco) or how many yards a penalty should be marked off, but they've proven time and again that simple tasks like these are too tough to handle.

The latest example of the replacement officials' difficulty with simply marking off a penalty correctly came on Sunday in Tennessee. The Detroit Lions and Tennessee Titans were in overtime, and it was Titans ball at their own 44-yard line. It was second-and-18, as Tennessee had just lost eight yards on a run by Chris Johnson. A flag was thrown for a facemask penalty on Cliff Avril, but the officials incorrectly picked it up. This made it second-and-18 from the Tennessee 44: 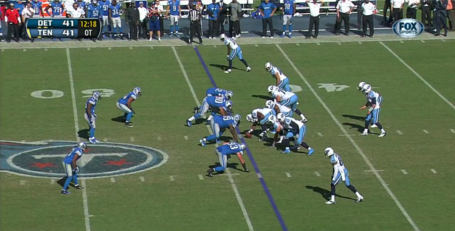 On the next play, Jake Locker completed a pass to Craig Stevens for a gain of 24 yards (to the Detroit 32). The officials threw a flag on Lions linebacker Stephen Tulloch for a helmet-to-helmet hit. With the penalty being tacked on to the end of the play, it appeared as though the Titans would have the ball in the Lions red zone. 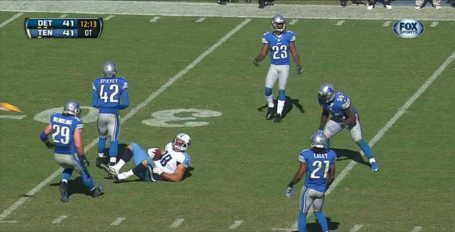 That was before the officials were buzzed to review the catch. The officials took several minutes to review the call and ultimately determined that the ball bounced off the ground, making it an incomplete pass. Personally, I didn't think the ball actually hit the ground. While it did pop up, I thought that had more to do with Stevens landing than the ball coming into contact with the ground. At the very least, there was not enough evidence to overturn the call based on what we were shown by FOX. Somehow, the officials came to the conclusion that a catch was not made despite this being the closest we saw the ball to the ground: 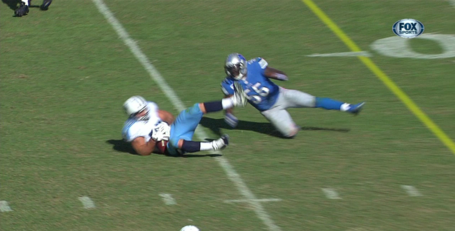 Following the ruling, the official made another announcement about how they needed to enforce the personal foul from the previous spot. That is the correct procedure because the personal foul wasn't eliminated just because the pass was incomplete. So, with the previous spot being the Tennessee 44 and the penalty being 15 yards, it should be first-and-10 Titans at the Detroit 41, right? Not according to the officials, who marked the ball at the Detroit 29. 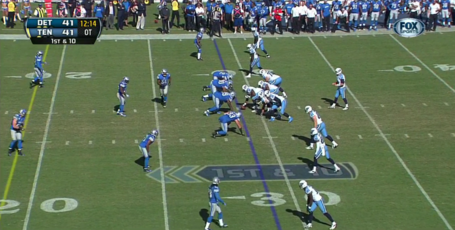 By putting the ball at the 29 instead of the 41, Tulloch's personal foul ended up being a 27-yard penalty. I believe the officials were thinking that the previous spot was the Detroit 44, which is 15 yards away from the 29-yard line. However, it was actually the Tennessee 44, thus the difference of 12 yards. Instead of Tennessee being at the 41-yard line and out of field goal range, the mistake put the Titans inside the 30.

After the game, Jim Schwartz said that there obviously was a "miscommunication," according to the Detroit Free Press. He also said that he "kept on trying to alert" the officials about the mistake, but clearly they didn't get the message. As a result, the Titans picked up 12 free yards, although considering the blown facemask call on the previous play and the questionable decision to overturn the catch in the first place, I guess you could say that everything evened out.

Regardless, that doesn't change the fact that the officials blew something as simple as marking off a penalty in overtime on the drive that turned out to be the difference in the game in terms of scoring. The Titans went on to kick a field goal and win by a score of 44-41.

It was a miracle that the Lions even forced overtime, especially when you consider they lost a few seconds at the end of regulation before Shaun Hill's Hail Mary. With 16 seconds left, Hill took the snap and threw a pass to Nate Burleson, who had the ball jarred loose by a defender. Initially, one official was set to rule the play a fumble, and he even threw his bean bag to indicate this. A couple seconds later, another official whistled the play dead and ruled an incompletion, which was the correct call.

When the ball first hit the ground, 11 seconds were on the clock. When a whistle was first blown, the clock showed eight seconds. When the clock was ultimately stopped, only five seconds remained. After announcing that the play was ruled incomplete, the referee told the clock operator to change the game clock to seven seconds. There was no review to make sure this was correct, and while it obviously didn't matter considering the Lions scored on the next play, they were shortchanged at least one second if you go by the whistle and four seconds if you go by when the ball actually hit the ground. How this didn't even get a second look is beyond me given the situation and how big of a difference there is between seven and 11 seconds when you are 46 yards away from the end zone with no timeouts.

I'm amazed that Roger Goodell has let this circus go on so long with the replacement officials. I don't have anything against them personally because they shouldn't even be put in this situation, but they have got to go. How many more simple calls is the NFL going to let them blow before enough is finally enough? When it's gotten to the point where you can't even trust them to mark off a penalty correctly, perhaps it's time to make a deal with the regular officials and save face before it's too late.