An overlooked issue from Sunday's game against the Titans was the Lions' chemistry problem on the right side of the offensive line. This film review breaks down what went wrong and what it means for the future.

There was a lot I could break down this week: special teams breakdowns, defensive back play, whether the running game is helping or hurting the offense. However, those topics will likely be beaten to death by the media. Rather, I'd like to examine a small issue I noticed on Sunday that could become a larger problem if it continues. On two occasions, Gosder Cherilus and Stephen Peterman were not on the same page, and it cost the Lions dearly in both instances. Offensive line chemistry is key in both pass and run blocking. Without chemistry, you get ... well, you get Sunday's game.

Play one: Third-and-two at the Titans' 19-yard line

Here's what appears to be the design of the play (click to enlarge): 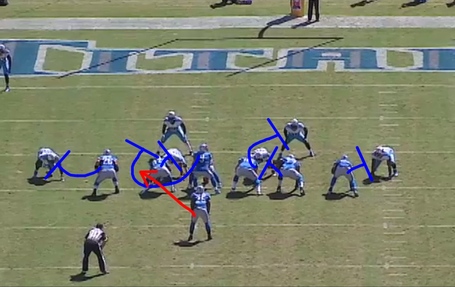 The Lions have six people blocking six defenders. This is a good call and a great look pre-snap. But focus on the line directly to Matthew Stafford's right. Peterman heads directly to the second level, while Cherilus needs to loop around to get inside leverage on the defensive tackle. Either Cherilus fails to do this, or he does not believe it is his assignment. 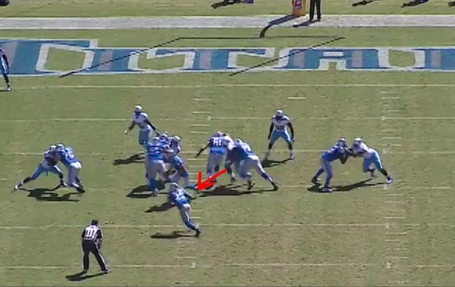 Cherilus appears to be expecting help with this tackle before Peterman heads to the second level. He does not get it, and the defender easily disrupts the play in the backfield. I can't know for sure what the exact play call was, but based on Cherilus' reaction, it certainly seems like Peterman should have double teamed the tackle. If he does, it is an easy conversion, as the left side of the line does their job properly. Instead, the Lions fail to pick up the third down and have to settle for three early. ANGRY CHERILUS! 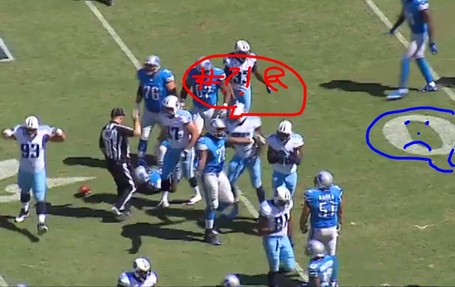 The situation: After the Titans took a kickoff to the house, tying the game late in the fourth quarter, the Lions are driving to, once again, take the lead. The Lions have worked their way down to a third-and-manageable after a first down holding call. Once again, a miscommunication (which is pretty much the word of the game) cost the Lions a big opportunity. 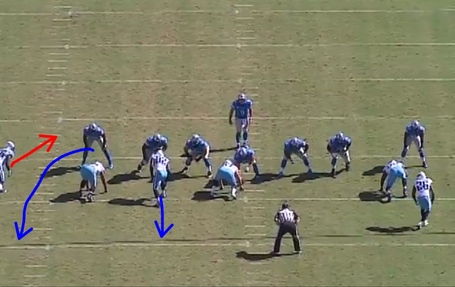 The Titans are disguising their pass rush before the snap. It's a pretty standard disguise, but it's effective. The three down linemen are clearly rushing the passer, but the two defenders near the line of scrimmage could be bringing the heat or could be dropping into coverage. As it turns out, the outside defender is pass rushing while the inside guy is dropping back. This is not what the Lions were expecting. 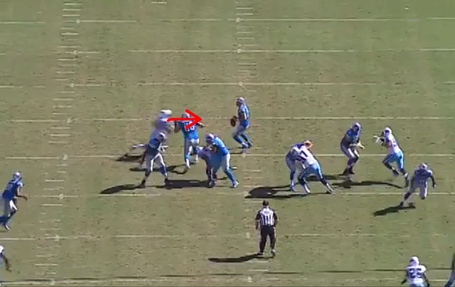 The outside defender goes unblocked, and despite Peterman's last ditch effort, the defender is able to get to Stafford nearly untouched.

So what went wrong? Well, again, it's impossible to know, but here are the two scenarios that could've/should've played out.

The first (and I think most likely of the two) is that Peterman failed to pick up this defender in time. The play would've looked like this: 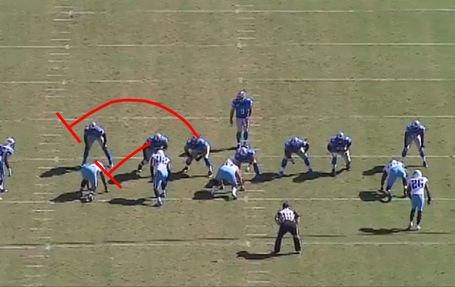 Because the end is out so wide, it would actually be easier for Peterman to get to him because Cherilus would not have the time nor speed to beat him to the outside. Cherilus would, instead, take the defender directly to his right. This is how Cherilus read the play.

This is how Peterman read it: 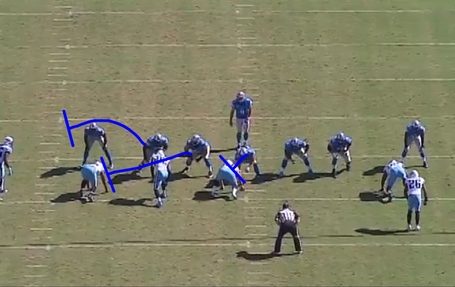 Peterman believes that the outside man is Gosder's responsibility, so he takes on the same defender as Cherilus. This gives the end just enough space, and by the time Peterman notices, it's too late. And everyone is angry at everyone else: 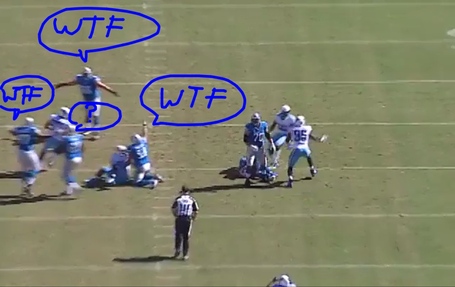 Fourth down, punt. Two plays later, the Lions are down seven.

Now the point here isn't to figure out who was wrong (though I think it was Peterman in both instances), but simply to point out that something is going wrong. The linemen are not on the same page and are clearly not happy with each other. That is dangerous. Coming off such an emotional loss, it's hard to imagine these grudges going away quickly. With Minnesota coming to town and Jeff Backus having his hands full with Jared Allen on the left side, the last thing the Lions need is chemistry issues on the right. Hopefully they'll have things figured out by then.