Share All sharing options for: On Paper: Detroit Lions Vs. St. Louis Rams

The Detroit Lions open their 2012 season at home against the St. Louis Rams. The Lions are looking to repeat and build on their 2011 playoff run, while the Rams are basically the 2010 Lions, hoping that their young quarterback can stay healthy and carry the team away from the horrors of last year.

If you are unfamiliar with my previews, take a look at last year's opener for a quick tutorial. Basically, I take statistical data from previous games (for Week 1, I will use 2011 data) and compare game day stats to expected, average stats. If a team's unit (pass offense, run defense, etc.) continually outperforms expected averages, then I conclude that unit is above average. From there, I compare opposing units (i.e. Lions pass offense vs. Rams pass defense) and award a matchup advantage on a scale of 1-5 based on how large the advantage is and how likely it is to affect the final outcome.

The entire thing is a bit overwhelming to newbies, but most catch on after a few weeks.

(Rankings based on 2011 yardage statistics) 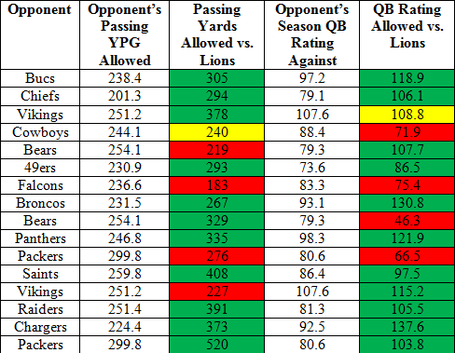 It should come as no surprise that Matthew Stafford and the Lions put together a very solid chart last year. Stafford put up a passer rating of 100+ in 10 games and surpassed 300 yards passing in eight. This year, Stafford only has more weapons with the addition of Ryan Broyles and the (hopeful) progression of Titus Young. 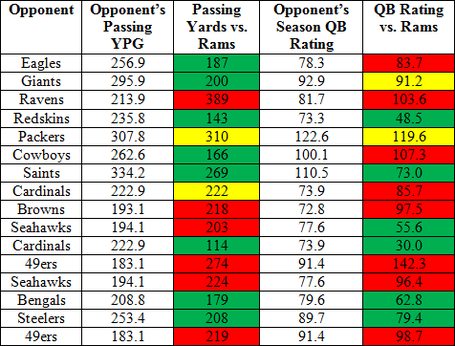 The Rams' seventh-best pass defense rating is a little misleading. As we can see from the chart, the Rams defense was very average last year. In 2011, eight of the Rams' opponents beat their own passer rating averages when they faced the Rams and six outperformed yardage averages. By passer rating allowed, the Rams slide all the way to 23rd in the rankings. Opponents completed 60.5 percent of passes against the Rams (15th) for an average of 7.4 yards per attempt (19th).

But this Rams team is quite different from the 2011 team. According to Peter King, 60.4 percent of the current Rams roster is completely new from last year. Spearheading the new Rams are new corners: veteran Cortland Finnegan and rookie Janoris Jenkins. Jim Schwartz is well aware of what Finnegan is capable of, having been his defensive coordinator for the first three years of his NFL career. Jenkins should be an interesting player to watch on Sunday, as many fans thought Jenkins should have been the Lions' first-round pick this year.

Player to watch: Jenkins. He's got his work cut out for him in his first career NFL game, but it'll be interesting to see how he holds up against the Lions' explosive offense.

Advantage: Lions +2.5. We know how great the Lions' passing threat can be, but I can only assume how good the Rams defense will be. I'm assuming it'll be around average, and therefore the Lions will perform somewhere near their average. Expect Stafford to creep near 300 yards and two touchdowns. 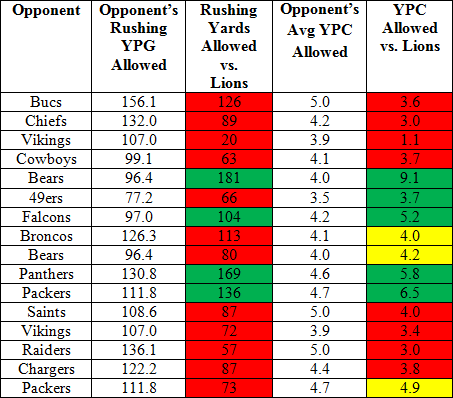 I don't think I'm telling Lions fans anything they don't know when I say that the Lions run offense was not very good last year. With Jahvid Best out for the foreseeable future and Mikel Leshoure suspended for the first two games, I don't expect much change early this season. I like Kevin Smith, and he'll be serviceable if healthy, but he won't be a game-changer. 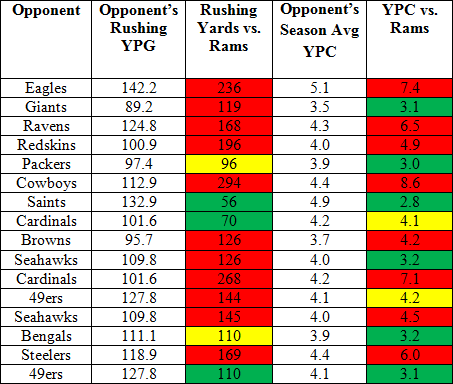 On the other hand, the Rams run defense was not very good last year, either. At first, I thought their poor ranking was maybe due to falling behind early in games and teams just running it down their throat late. However, the Rams also ranked 31st in yards per carry (4.8), suggesting the Rams' run defense problems were real.

Player to watch: Rams DT Jermelle Cudjo. With rookie Michael Brockers sidelined due to injury, the inexperienced Cudjo takes his place. If Cudjo gets pushed around, the Lions may be able to create some lanes up the middle.

Advantage: Push. Neither team appears to have an edge of the other here, and I don't think the Lions will run the ball much anyway, so this will be pretty unimportant in determining the final outcome of the game. 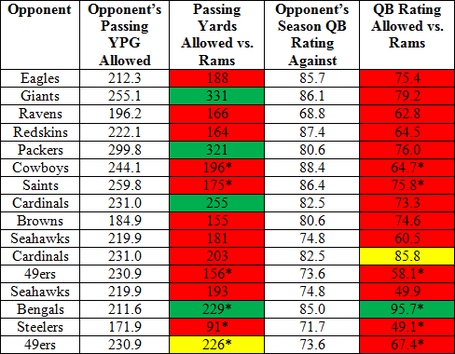 If you want to know why the Rams were 2-14 last year, look no further. Sam Bradford struggled in his sophomore year, both statistically and physically. Bradford finished with only six touchdowns in 10 games, and he managed just a 70.5 passer rating. It was a disappointing season, especially considering most people were predicting a solid improvement from his decent rookie season (18 TDs, 15 INT, 76.5 passer rating).

A lot of last year's struggles were blamed on the offensive line, but unfortunately for Bradford, the line remains well below average. The Rams did add new center Scott Wells to the mix, but their newly revamped offensive line remains a huge question mark. Additionally, the Rams have one of the weakest receiving corps in the league. I think Bradford's a good quarterback, but he's in an awful situation right now in St. Louis. 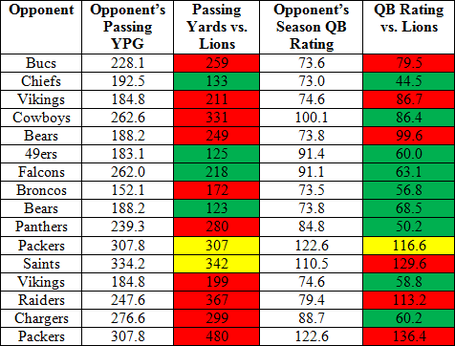 This may come as shock to those who weren't around last year, but the Lions' pass defense chart isn't as bad as you'd think. They held nine of 16 opponents UNDER their passer rating averages. In fact, until Thanksgiving, the Lions hadn't given up a passer rating of over 100. Of course, it all kind of fell apart from there. The Lions lost a couple players to injuries, but perhaps more importantly, they started facing some elite pass offenses and failed to hold their own.

This year, the secondary looks like it may be worse. The Lions lost Eric Wright to free agency, Aaron Barry to the law and are likely going to be without their best two defensive backs (Chris Houston and Louis Delmas) for at least Week 1.

But the saving grace of the pass defense will again be the front four. The Lions' depth is amazing on the defensive line, and we should see more of emerging players Willie Young and Nick Fairley.

Player to watch: Fairley vs. Wells. Fairley has looked completely dominant when he's been out on the playing field, and he should face a good test early against the Rams' new center.

Advantage: Lions +0.5. I was tempted to make this one a draw, but the Rams have little to no weapons on the receiving end. The Lions' secondary is scary thin, and it's never good when you're starting a rookie corner in Week 1, but the schedule couldn't have worked out better. The Lions will probably cede yardage around 250 for the game, but Bradford may be running for his life and I'd be pretty surprised if he didn't turn the ball over at least twice. 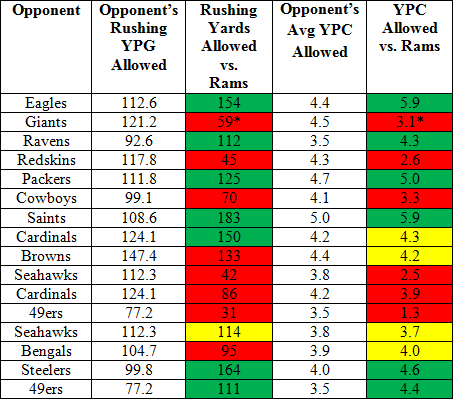 Despite having one of the best running backs in the past decade, the Rams struggled to run the ball consistently last year. They outperformed yards per carry averages in only six games and yardage averages in seven. They ranked 19th in yards per carry. To summarize, they were slightly below average. Again, experts point to offensive line struggles as the culprit of the problem.

This year, the line is slightly revamped, but Jackson is another year older and is now expected to hit the Aging Running Back Wall of Doom at any moment now. I think it's a fairly safe assumption that the Rams running game will be somewhere near average again this year. 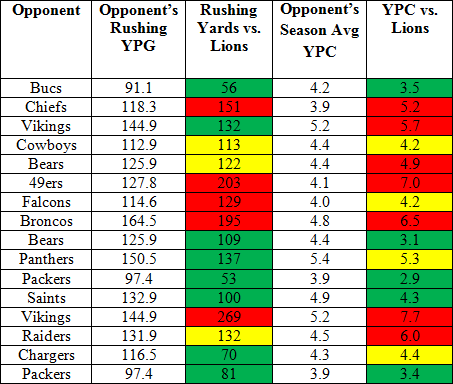 This year, we're likely to see more of the same, with Nick Fairley being the only new body in the starting front seven. Fairley will help, but he is unlikely to fix all of the Lions' run defense problems.

Player to watch: Ndamukong Suh. Suh caught a lot of criticism last year for focusing too much on pass rushing and making himself vulnerable to run blocks. It'll be interesting to see if he focuses on playing more disciplined or if he continues to do what he does best.

Advantage: Rams +0.5. I think the Rams are going to try to run the ball down the Lions' throat, keeping Stafford off the field and relieving some of the pressure from Bradford. They'll be met with some success, but their offensive line isn't good enough to dominate this matchup.

One of the biggest factors in this game that can't be found on the stat sheet is the replacement referees. They struggled throughout the entire preseason, and although they didn't have much of a negative effect on opening night, it is almost certain something will go wrong in Week 1. I'm a bit afraid that the Lions' aggressiveness on defense may draw an errant flag or two from the inexperienced refs, but that's only a hunch.

Another big factor that wasn't caught in the statistical analysis is how different the Rams are this season. As mentioned before, more than half of their 53-man roster is full of players not on the team last year. That makes this game extremely hard to predict, especially with it being opening weekend. I wouldn't be surprised if the Rams are better than most people are giving them credit for.

The Lions come out with a +2.5 advantage, which is fairly significant by "On Paper" standards. The Lions clearly have a better offense, and the defenses are somewhat equal. I think both teams come out a bit slow on Sunday and the Lions pull away in the second half. Lions 31, Rams 17.