A look at how the Cleveland Browns use their most consistent offensive weapon and thoughts on how the Detroit Lions might defend him.

This Sunday, the Lions take on the Cleveland Browns in a battle of two teams fighting to stay atop their respective divisions. Given that fact, Sunday's game should prove to be by far the most meaningful Lions/Browns game the NFL has seen in the past 20 years.

Cleveland's most consistent offensive weapon this season has been breakout third-year tight end Jordan Cameron. Jim Schwartz was asked this week about the challenge that Cameron presents. Here's what he had to say:

"He's a tough one. In the Norv Turner offense, the tight end has always been a productive player... That guy is playing a key role in their offense. Not just short passes, but also long passes. Five touchdowns already this year. He's made a lot of plays for them. Our linebackers' and safeties' ability to keep him from affecting the game and making big chunks of yards is definitely a key this week."

Give credit to Schwartz here, as he goes so far as to provide a historical premise for Cameron's success. Like the ageless Antonio Gates in San Diego, Cameron also comes from a basketball background -- in fact, he originally chose basketball over football coming out of high school.

You'll notice Schwartz doesn't spend any amount of time discussing Cameron's blocking ability. I won't, either -- let's just say that "pedestrian" would be a charitable description. Fortunately for Cameron, when we discuss great tight ends nowadays, blocking ability doesn't enter into the picture too much. (Sorry, Brandon Pettigrew.) But when it comes to his abilities as a receiver, Cameron is undoubtedly great. Since the return of wide receiver Josh Gordon, Cameron has seen his number of targets go down, which is what one would expect when adding another receiving option to an offense previously bereft of them. Still, Cameron possesses a blend of size, speed and hands that presents serious problems for opposing defenses. So, how do the Browns use him?

A significant percentage of Cameron's catches are going to come in very similar circumstances to what you see below: 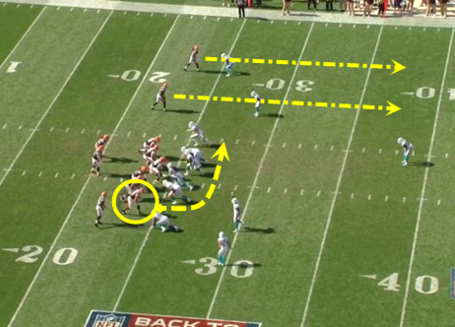 Here Cameron is lined up as a stand-up tight end on the right side of the Browns' formation. He spends a great number of snaps lined up like this, but he'll run routes from a three-point stance in traditional running formations as well. 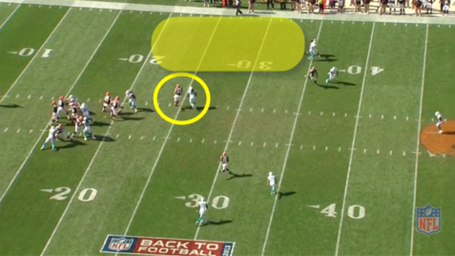 The play here is pretty simple: The two wide receivers at the top of the screen run go routes, taking their coverage deep and occupying the deep safety's attention. Cameron is going to just scrape across the formation into that gigantic void left behind. Matched one-on-one with a linebacker (Dannell Ellerbe, in this case), Cameron is an easy option for Brandon Weeden, who has to make a throw with low risk and high upside. If the linebacker covers and tackles (which he does on this play), the Browns net a few yards. If the linebacker isn't as reliable in coverage, Cameron has a lot of room in front of him.

In addition to those shallow crossing routes, the Browns like to run plays to get Cameron open on intermediate-to-deep routes against zone coverage, just as Schwartz said: 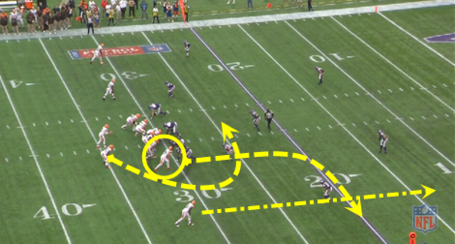 Cameron is going to be lined up in the same spot as before: standing up on the line of scrimmage to the right side of the formation. The wide receiver on Cameron's side, as in the previous play, is going to take his man deep and leave room underneath. 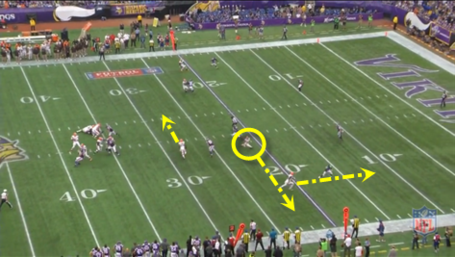 The linebacker over Cameron is going to be in charge of the flats, but when Cameron passes him, his attention turns to the running back coming out of the backfield and turning inside, technically entering the middle linebacker's territory. Cameron hits 11 yards, stops on a dime and heads to the outside to make an easy reception for 13 yards.

Let's take a look at another: 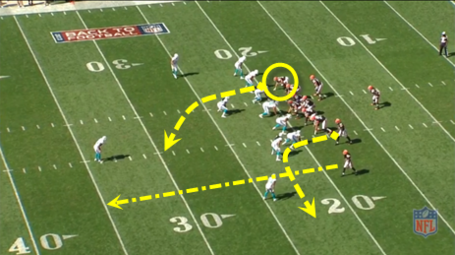 Cameron is a down lineman here on the right side of the formation. At the snap, he's going to run down the seam before breaking off to the left side of the field, across the formation. The slot receiver is going to run a 2-yard out and keep his man as shallow as possible. Meanwhile, like usual, the outside wide receiver is just going to book it straight ahead and take the cornerback deep. 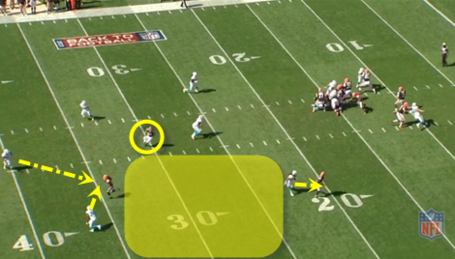 By the time Cameron enters that cornerback's zone, the defender's back is already turned. As soon as the safety's hips turn to run with the wide receiver, that ball is being delivered for another easy gain, this one of 21 yards.

Aside from these intermediate routes, Cameron is an absolute terror in the red zone. If he finds himself matched up one-on-one with a safety, or -- god forbid -- a linebacker, the ball is going his way. And it's probably going his way for a touchdown. He has the height and athleticism to win a jump ball (similar to Joseph Fauria's catch in Week 1), but he also has the speed to beat a defender to the corner of the end zone.

So, how do the Lions defend Cameron? The majority of the burden is going to be placed on Louis Delmas and Glover Quin. If the Lions' defensive looks against the Chicago Bears are any indication, Quin is going to come up near the line of scrimmage to man-up on Cameron, as he did to Martellus Bennett on a number of plays, leaving Delmas as the single-high free safety: 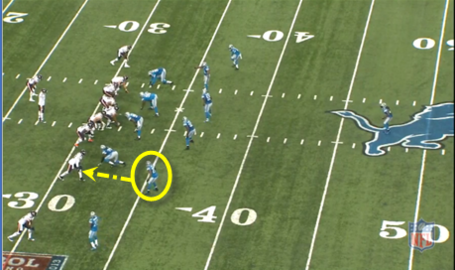 Logically, it makes sense. You would expect Quin, as a converted cornerback, to have a better ability to jam and cover at the line of scrimmage than Delmas. For what it's worth, Delmas is currently rated slightly better than Quin in coverage by Pro Football Focus, although it's not a huge difference, as they're fifth and 12th in that category, respectively.

But, after watching last week's loss against the Green Bay Packers and seeing Jeremy Reisman break down Delmas' tendency to gamble while deep in coverage, doesn't it feel like the roles should be reversed? If the Lions are using a single-high look and bringing a man down near the box to account for Cameron, wouldn't it make you more comfortable to see the hard-hitting wild card at the line of scrimmage and the purer coverage safety (numbers be damned) over the top to account for the Gordon long ball?