Share All sharing options for: Another Ndamukong Suh hit under NFL review

The NFL opened up the doors to its officiating command center this past Sunday, and a video has been posted highlighting what goes on during a typical game day. In the video, as noted by Pro Football Talk, it's revealed that the NFL is reviewing a hit by Detroit Lions defensive tackle Ndamukong Suh.

What exactly happened on the hit in question? Suh took down Cleveland Browns quarterback Brandon Weeden right after he released the ball on a play, and NFL vice president of officiating Dean Blandino viewed the hit as a "potential helmet to the body" that involved Suh lowering his head, as you can see here: 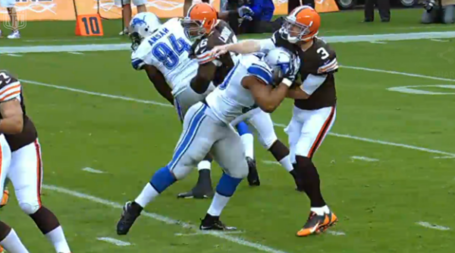 It's true that Suh lowered his head, but it's not as if he rammed through Weeden directly with his helmet. As you can see in the next two screencaps, Suh took Weeden down more by pushing with his arms than anything. 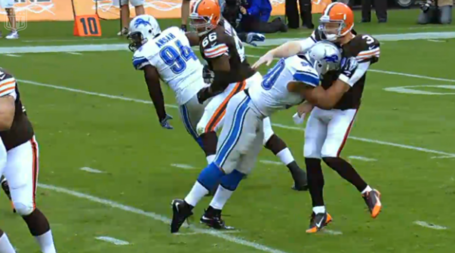 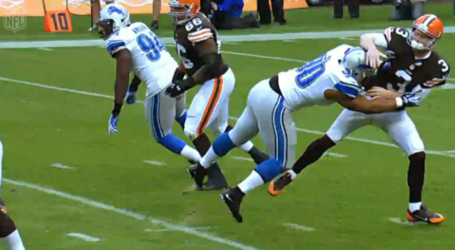 It hasn't stopped the NFL from slapping him with a fine before, but this doesn't exactly seem like a fine-worthy hit. It wasn't even flagged during the game, and my personal feeling is that it's been highlighted for further review simply because of Suh's reputation.

We should find out later in the week if any fine has been handed out for the play.