Breaking down one of the Detroit Lions' biggest issues so far: Their run defense.

Share All sharing options for: Film review: What's with the Lions' run defense?

Although the Detroit Lions sit nicely at 4-2 through six weeks of play, one aspect of the team has been troubling for each game this season: run defense. The Lions rank 29th in rushing yards per game allowed and are dead last in yards per carry allowed. In the past four weeks, every opponent has had at least 120 rushing yards and 5.5 a carry against the Lions. This is particularly shocking, given how the defense's strength lies in the middle of the line. So what exactly is going wrong here? I went to the Cleveland tape to find out. 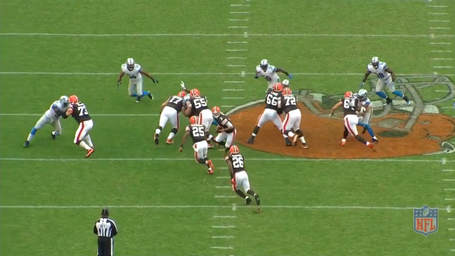 As you can see on this play, both defensive tackles are being doubled. This leaves DeAndre Levy and Stephen Tulloch free to make a play. However, both fail to do so. 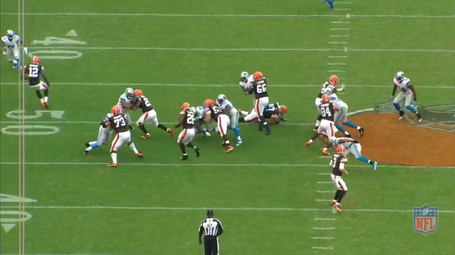 Unfortunately, linebacker errors continued throughout the game. On the play below, Tulloch pulled a Louis Delmas. He tried to jump the play, leaving his assignment unaccounted for. 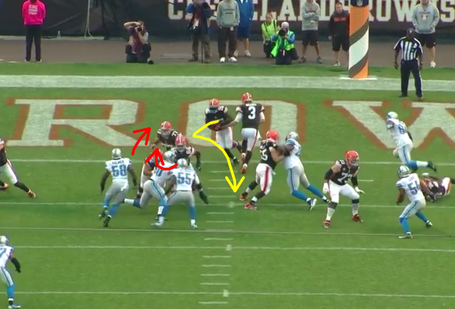 This run is designed to go to the defense's left. Tulloch notices this and tries to get a jump on the play. This leaves the middle of the field wide open for a cutback lane. 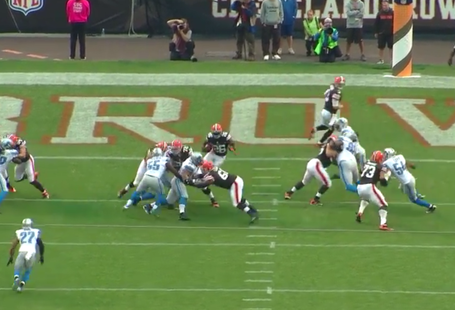 Tulloch commits way too far, and can't get back to his original position. The cutback lane is enormous and the Browns are able to get out of their own end zone on the very first play of their possession.

But neither of these plays was too harmful for the Lions. Both plays went for about 10 yards. What has really been hurting the Lions defense is giving up long run plays. The Lions have given up four rushing plays of 40+ yards, which is two more than any other team in the NFL. This week's long run came courtesy of a fairly straightforward end-around play. 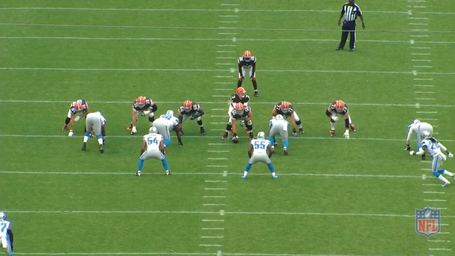 The Browns fake a run to the defense's left. Pay close attention to where the linebackers are above. 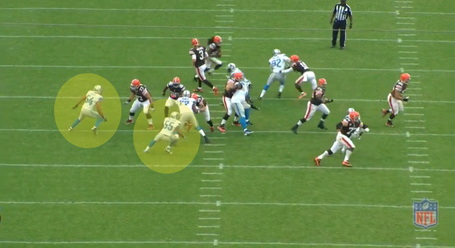 Both players heavily commit to the faked run. As you can see, Travis Benjamin already is ahead of both linebackers to the right and has a full head of steam. Meanwhile, the linebackers are just now changing directions to try and catch him.

Now look to the right. See all of those Cleveland linemen with no one to block? Had the linebackers been playing with a little more discipline, they could have distracted some of those guys and freed up a man in the secondary to make a play.

To be fair, Levy makes up for his original mistake by hustling down the field and eventually making the tackle. But Tulloch does the exact opposite and takes a horrible angle, failing to even get a hand on Benjamin before he runs by him.

There were other culprits on the play, too. Andre Fluellen gets into the backfield quickly, but is fooled by the fake and eventually has his back turned to the actual ball carrier. Bill Bentley doesn't make much of an effort to get off of his block. But if the linebackers are less susceptible to the ball fake, none of these things matter.

I didn't go into this column thinking I'd be singling out Tulloch as a main culprit for run defense issues, but he was the common denominator on these three big plays for Cleveland. He and Levy need to take advantage of the attention that Ndamukong Suh and Nick Fairley are getting up front.

The good news is tackling doesn't seem to be a problem. Of the three runs I looked at, none were sprung by a missed tackle. In fact, Levy and Tulloch lead the team in tackles by a wide margin. They both just need to put themselves in a position to make more plays, because they have the physical abilities to do so.