The Detroit Lions' current rookie and former starter saw some significant action against Cleveland last week. Let's take a look at how he played.

When Rashean Mathis came out of the game this past Sunday with an injury, Lions rookie and former starting cornerback Darius Slay found himself back on the field for a significant number of plays. Though the somewhat-maligned rookie was called for a pass interference penalty, his name didn’t pop up all that much, which for him probably constitutes good news. Jim Schwartz was asked on Monday about Slay’s performance. Take it away, Coach:

"I thought he did a nice job. Rashean (Mathis) has really done a good job coming in and setting a good example for Slay. I think Slay's been improving over the last month…Physically he's done some good things, but I think mentally and just game-awareness he continues to improve…there's still a lot of things he's continuing to work on. He also makes some good plays. I thought he made a really good play on that one pass breakup that ended up being called pass interference, but I thought he did a really nice job on that play - got a hand in, it got called, but I thought he made a nice play on the ball there."

Well… all right. Not exactly a glowing endorsement when a coach points out a player’s most significant negative contribution as his biggest positive, but there’s something to publicly defending your players. Have to keep Slay’s confidence up, right?

With Mathis being limited in practice this week, Slay could end up being slotted in as the starting cornerback against the Cincinnati Bengals. With that in mind, let’s take a closer look at how he played against Cleveland.

For the obligatory statistical note, Pro Football Focus graded Slay out at an even 0.0 against Cleveland. So, sure, he didn’t come in and light the world on fire (not that any of us thought he did), but it’s certainly a far cry from his abysmal -4.4 in Week 1 against Minnesota. Statistically, Schwartz is right: He’s improved over the last month!

With the numbers out of the way, let’s observe some of his plays against the Cleveland Browns. Being a glass half-full man myself, I’ll start with the positives. 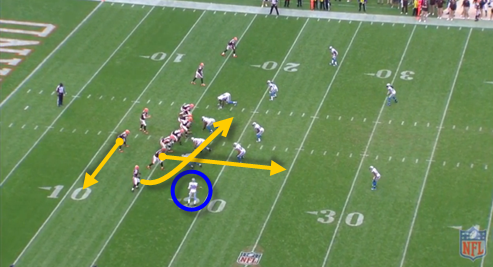 Slay flashes the instincts and the athleticism that you would expect in a second-round pick. Here, the Lions are going to show cover 2, meaning Slay is going to be responsible for the flats on his side. Cleveland is going to run Jordan Cameron deep to try to draw both Slay and Glover Quin along with him, clearing out space to run a screen to Chris Ogbonnaya. 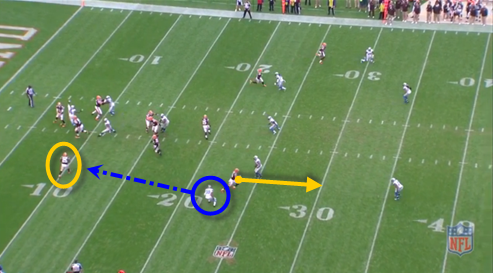 Slay rides Cameron as he goes vertical until the ball comes out into his flat, at which point he breaks on the ball. At this point, all Slay has to do is contain the receiver and make a tackle. 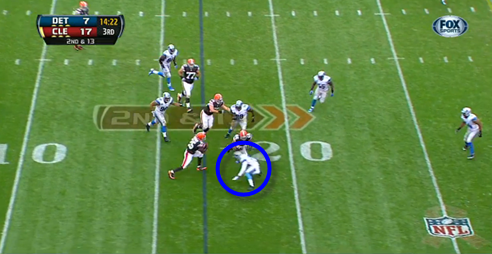 Slay does his job here, breaking down for a tackle and turning the runner in, allowing Nick Fairley (who diagnosed this the whole way) to finish his backside pursuit and clean up for a gain of only three. Not a flashy play, but a solid one for Slay.

Now, let’s take a look at Slay in a more isolated situation. 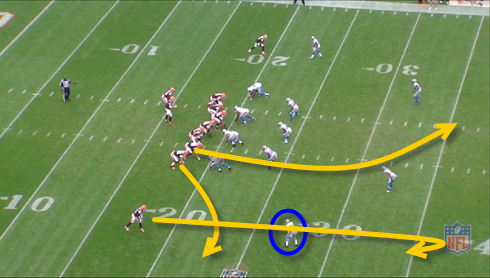 Slay is again lined up on the bottom of your screen, with a big cushion over Greg Little. The Browns are going to scheme to have Little matched up one-on-one with the rookie on this play. Cameron is again going to draw a lot of attention as he runs a deep post route. Quin, the safety on Cameron’s side, runs with him, leaving Slay alone as Little runs a 14-yard dig route. 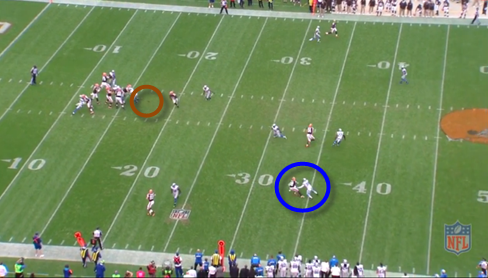 The ball has only just been delivered (highlighted) and Slay is in perfect position to make a play on the ball. It ends up being a poor throw by Weeden (which was a bit of a theme on the day), and one that Slay has an outside chance of intercepting. He does not (to be fair, it would have been an outstanding play), but the result is nonetheless an incomplete pass.

A few of Slay’s mistakes on the day were hidden. He put himself in some dangerous spots, but thankfully, those spots weren’t effectively exploited by Weeden and the Browns offense. 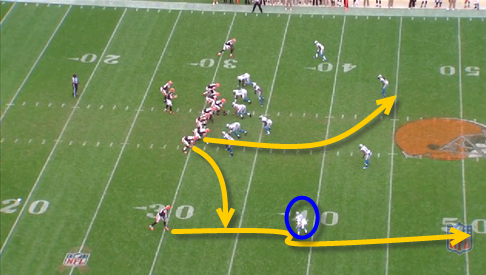 Here you’ll see the Browns lined up in the same formation as the previous play. And, just like before, Cameron is going to run the deep post, drawing coverage from DeAndre Levy (showing blitz here) in the middle and Quin over the top. Ashlee Palmer, likewise, will come into the flats defending the out route from the second tight end.

There’s one noticeable difference, though: 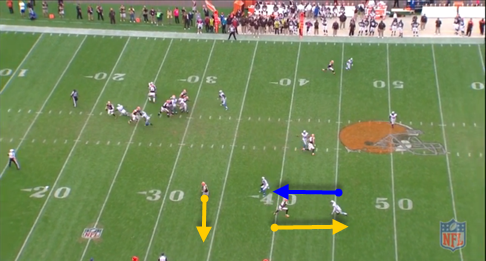 Little does not run the 14-yard dig, like he did on the last play. Instead, a quick stutter step has Slay jump the anticipated route. Look at that picture above – Slay and Little are running in opposite directions in this frame. As you’d imagine, Little easily gets behind him and wide open for a bomb. It never comes to that, thankfully – the other thing you probably notice in the picture is a blitzing Stephen Tulloch in Weeden’s face as he dumps it off for a loss of two.

Even in tighter coverage, Slay struggled at times. 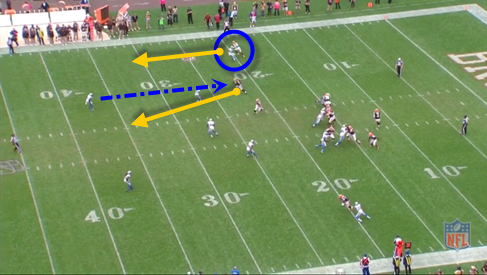 This was one of the more pivotal plays in Sunday’s game. The Lions are defending a 21-17 lead, with just less than 10 minutes left in the game. The Browns are facing a second-and-25. Slay is at the top of the image, in the process of whiffing on a jam on Little at the line of scrimmage. The slot receiver is going to run a seam, preventing Quin from committing to either receiver coming his direction. 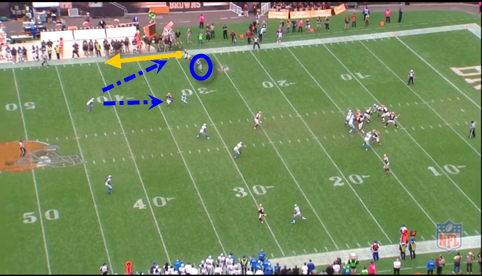 Little has Slay beat as this ball is being delivered. Frankly, the ball comes a little late, and ends up being ruled an incompletion (out of bounds), to go along with a failed challenge. But Brandon Weeden’s mistakes don’t necessarily mean good plays from Slay. A better pass here turns a second-and-25 into a third-and-inches.

In all, Schwartz’s comments and PFF’s grades are probably spot-on when it comes to Slay. His athleticism is undeniable, he makes some good plays on the ball and he didn’t get burned for anything huge. But a lot of that last part has to do with playing against Weeden, which makes it hard to really get a judgment on Slay. Honestly, he didn’t get tested all that much. When he did, the results were inconsistent.

There’s plenty to be excited about with Darius Slay, but like any young cornerback, he still has a lot to improve on. If we see him starting over the next couple weeks, we may see just how quick a learner he really is.