The Detroit Lions came into the 2013 season with one of the most feared pass rushes in the league. But it hasn't turned out that way, yet. A look into why that may be happening.

We've heard it all year. "Detroit's pass rush is the key to their defense." "Detroit may have the best front four in the league." "Detroit's defensive line may win them games all by themselves."

But we're now seven weeks into the season, and that hasn't been the case. The Detroit Lions rank 27th in sacks (13). In the past three weeks, they've allowed Aaron Rodgers, Brandon Weeden and Andy Dalton to rack up over 900 yards and 6 touchdowns. They were only sacked 3 times.

So what exactly is going wrong here? Are they being outcoached? Are we overlooking other problems not related to the front four? Or did we just massively overrate the defensive line? The tape from the Cincinnati Bengals game provided some answers.

Answer No. 1 - Opponents are getting the ball out quick

Against the Lions, Dalton and the Bengals were getting the ball out extremely fast. At times, the pass rush was there, but they weren't given enough time to complete the sack. On this play, Nick Fairley makes a great inside move, but doesn't get there in time. 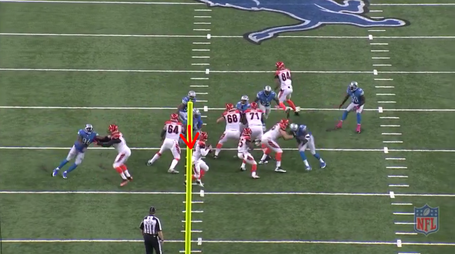 Fairley makes a great inside move on the center, who had all of his momentum going in the opposite direction. Meanwhile, Willie Young uses his speed and strength to bull rush the pulling guard. Even Ziggy Ansah is doing a pretty good job forcing his man deep into the backfield. Only Ndamukong Suh is failing to garner any pressure, but he's facing a double team. Overall, the pocket is closing quickly. 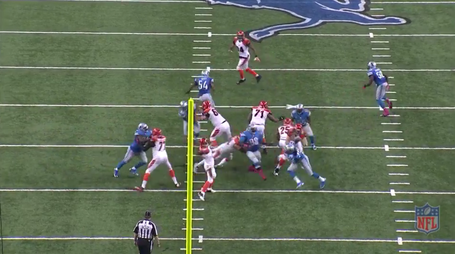 But Dalton only makes one read. As you can see, Fairley is in the passing lane, Young is barreling down and Ansah is forcing his man closer in on Dalton. He has no room to step into his throw, and instead must throw flat-footed. He nearly completes the long catch to A.J. Green, but Chris Houston was tight in coverage.

The Lions saw this all day. Dalton didn't have to go through his progressions much on Sunday and was quickly releasing the ball before the defensive line had any chance. I know we were all told that defensive line pressure can mask secondary deficiencies, but it's a two-way street. If coverage isn't forcing quarterbacks into looking at second and third options, the defensive line will be rendered obsolete.

Answer No. 2: The Lions are not an effective blitzing team 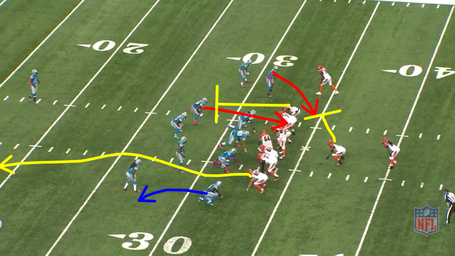 The Lions tried to be sneaky by sending heavy pressure on the right side of the offense, while Young dropped back into coverage on the left side. Bringing a lot of heat from one side of the line is typically a very effective way to free up an unblocked pass rusher. But either the Bengals knew this was coming or they luckily called the exact right play.

The tight end on the right side stays to help max-protect, while the fullback picks up Glover Quin on the blitz. 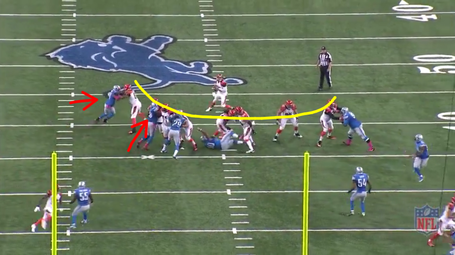 Neither blitzer ever gets near Dalton, and he's left with a perfect pocket to settle in. Meanwhile, Young drops into coverage where there is no one (the Bengals only had two different routes on this play). Tyler Eifert is left single-covered in a mismatch against Rashean Mathis and scores a touchdown.

This was either a brilliantly planned play from the Bengals or just an unfortunately timed blitz. The Bengals were 100 percent prepared for that exact blitz and no one was able to beat their man in coverage. Interestingly enough, if the Lions would have flipped the blitz to the other side of the line, it may have worked since the tight end on that side would not be pass protecting. But in this instance, it failed miserably.

Answer No. 3: The Lions get too cute sometimes

The Lions know they have talent on the defensive line. So, occasionally, they like to shake things up to create confusion on the line. Sometimes, that's a good thing. Sometimes, it only looks cool. 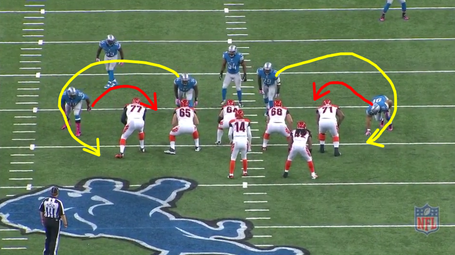 Here the Lions have Suh and Fairley lined up at the defensive end position, while Young and Ansah are lined up like blitzing linebackers over the offensive guards. At the snap, the "defensive ends" crash inside, hoping to take as many offensive linemen as possible with them. Then, the "linebackers" loop around the edges, hoping to run freely around the chaos caused by Suh and Fairley. 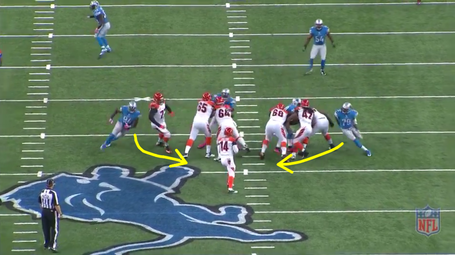 And it works. Fairley draws two linemen while Suh draws three. Young and Ansah run free toward the quarterback. So where's the problem? Well, you may notice that Dalton has already settled in after his dropback. The play has taken too long to develop and Dalton easily releases the ball before either defender can get to him. Again, it's to Dalton's first read, but when he's getting rid of the ball quickly all day, fancy plays like this aren't going to be effective.

Overall, I was somewhat happy to find that the problem didn't seem to be in the players themselves. Often the linemen found themselves just inches away from disrupting a play or in need of half a second more to get to the quarterback. Though I have to say, I'm a bit disappointed that the coaches haven't figured out a way to counteract the opponent's quick release. I'd really like to see some blitzing up the A gap (between the center and guards) or some creative disguises in coverage to force quarterbacks to hold on to the ball just a second longer. The talent is there. There are no excuses.