With the Detroit Lions facing the Dallas Cowboys this Sunday, let's jump on the Dez Bryant vs. Calvin Johnson media bandwagon and see how each team uses its superstar wide receiver.

You guys might not have heard about this, but earlier this week, Dallas Cowboys wide receiver Dez Bryant expressed some self-confidence when asked to compare himself to Calvin Johnson. Obviously, some folks were shocked that a wide receiver -- a position known for its humble and deferential superstars -- would do something like this. Jim Schwartz was asked this week about Bryant's comments, and responded:

"We're not playing the superstars competition. We're playing football. Each guy is going to be asked to do different things. Their number one job is to help their team win. That's the only competition that we're going to have. Every player should have confidence. I'm sure he does...I think that, it would probably be a little more of a story if somebody had asked him that question and he responded with, ‘No, I don't.' You want players to have confidence. I think he's that way. I'll respect him for that."

Normally I'm critical of Schwartz for downplaying every question thrown his way, but in this case, he's right to do so. I don't think Schwartz would be foolish enough to say, for example, that Bryant would be the third-best wide receiver on the Lions roster. Besides, given that both players play the same position, they'll never go against each other head-to-head (barring a Hail Mary situation with one inserted as a deep safety). So really, these comparisons are almost meaningless. I say "almost" because in this case, we did get this, courtesy of ESPN:

(Argue all you want, America, but ESPN remembers who earned Schwartz and Matthew Stafford their first win.)

So, after describing how meaningless these comparisons are, let's compare Calvin and Dez anyway! In trying to do so, let's go beyond their respective stats and see how they actually accumulate those stats. How do Dallas and Detroit use their superstar wide receivers?

While Bryant runs just about every route in the tree for Dallas, he does the greatest amount of his damage outside the numbers. One of the most consistent routes Bryant runs is just your basic stop route: 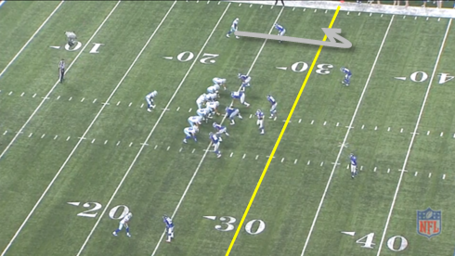 Bryant is going to be lined up on the top side of the image, on the left side of the Cowboys' formation. The first down marker is at the 30 here (highlighted). The cornerback covering Bryant is going to play soft coverage, always allowing for the deep threat he poses. That threat basically hands the Cowboys a first down. The corner doesn't even bother to backpedal and runs with Bryant at the snap. Bryant runs a quick 7 yards, stops, turns, catches the ball and moves the chains. If opposing defenses let them, the Cowboys are happy to run this all day.

The fear of the Dez Bryant deep route is well-founded. A little less than 20 percent of Bryant's routes (by my count) send him down the sideline for the deep ball, and Tony Romo is not shy about pushing throws downfield. 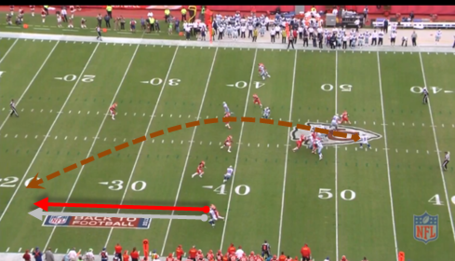 Here, Bryant is going to make the briefest of stutter steps before heading downfield. Romo uncorks one, and Bryant makes a gorgeous diving catch inside the 10. It's a classic deep ball to a classic deep threat. Nothing overly complicated about it, really, but Bryant's ability to get down the sideline quickly opens up a variation of that play that the Cowboys also exploit. 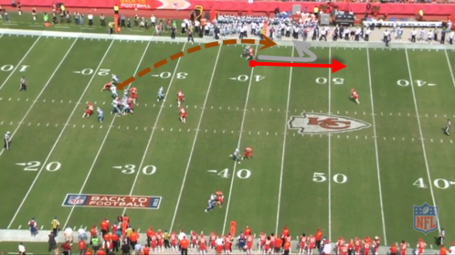 Later during that same game (in which Bryant has caught a couple deep sideline balls), the Cowboys are going to show essentially the same look. Bryant (top of the screen) is going to start running a go route at the snap. Once the cornerback turns and runs with him (which again, is almost immediately), Romo throws a back-shoulder ball that Bryant barely has to break stride for. It's a simple timing route that becomes possible when the defender is thinking deep ball. The problem is, with Dez Bryant, the defender should always worry about the deep ball.

The Lions' use of Megatron is almost opposite to a lot of the Cowboys' use of Bryant. Whereas Bryant does a great job terrorizing defenders outside the numbers, Calvin really makes his money over the middle of the field. 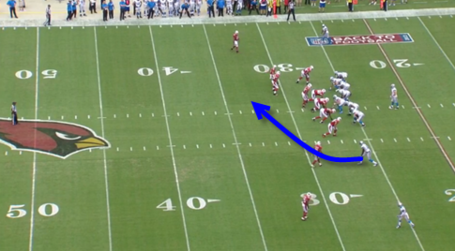 Do you like slant routes? I hope so, because the Lions sure do. Holy God, do they love slants. This is an unofficial number, but after looking at Calvin's targets for the season and adding them up, one-third of his targets come on slants. Bread and butter doesn't even begin to describe the untold amount of nutrients the Lions offense gains from slants.

And it doesn't even matter where they line Calvin up. Above you'll see him in the slot, but the Lions will split him out wide or have him motion behind a tight end, so long as it ends in a slant. It is incredibly monotonous, but it works. Calvin routinely picks up anywhere from 9 to 15 yards per catch. I suppose if you have a player like Calvin Johnson on your roster, it pays not to overthink things too much.

Another staple of the Lions' passes to Calvin is the 10- to 15-yard curl. It's quite similar to the stop route that Bryant runs with Dallas, only instead of turning to the outside, Calvin will turn in between the numbers. 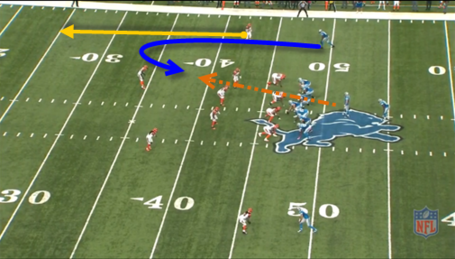 Johnson gets some softer coverage, which allows the CB here to stay in his backpedal longer. However, when a 6'5 freak of nature is sprinting downfield at you, you're going to have to turn your hips and run. Once that happens, Stafford delivers the ball at the 35 for a solid gain. A lot of Calvin's intermediate success happens here.

As much as we know that Megatron is a deep threat, the Lions simply haven't used him that way all that much this season. And, when they do, true to form, it comes over the middle. 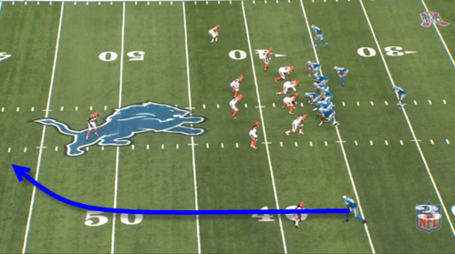 In the second quarter of last week's game, the defense opted to bring an additional safety down into the box, leaving only one left to cover the deep ball. This is a perfect (and rare) opportunity to push the ball to Megatron downfield. All he has to do is get open. Calvin is going to run a deep post route when the ball is snapped. 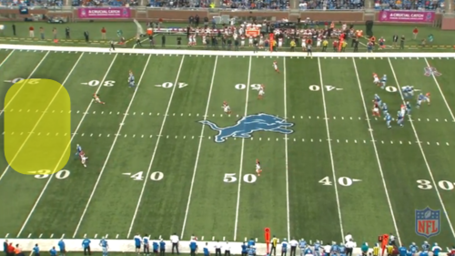 That's a lot of room in front of Megatron, and that's a ball that's going to have a yard or two too much on it (which happened a few times last week).

Obviously, I'm oversimplifying things here. When you have great wide receivers like Calvin Johnson and Dez Bryant, you can use them just about any way you want. Johnson runs down the sideline sometimes, and Bryant runs his share of deep crossing routes. And both punish opposing defenses by catching more than just slants and curls. When defenses single-cover them at the goal line, it's almost a guarantee that the back shoulder fade is coming. And with these two guys, why wouldn't it be? It's nearly unstoppable.

Whatever Calvin Johnson and Dez Bryant run, they run well. With two teams that aren't exactly shutting down opposing passing offenses, I'd expect some fireworks on Sunday.