Last week, I worried about the Detroit Lions' defensive line and their pass rushing struggles. They had been a complete non-factor for all of the game against the Cincinnati Bengals.

However, this week, the defensive line was huge in holding Tony Romo and the Dallas Cowboys in check. That may seem strange in a game where the Lions managed zero sacks and forced zero turnovers, but it's absolutely true. And most of the pressure came at the hands of the defensive tackles.

Let's start with the enigma that is Nick Fairley. Fairley has been invisible almost all season. He has only 7 solo tackles on the season and 1.5 sacks. On Sunday, Fairley only added 2 tackles to that total, but I still think this was his coming-out game. 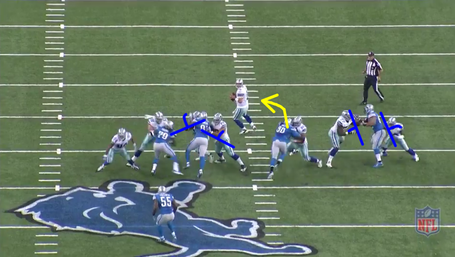 Fairley takes advantage of the double teams that Ndamukong Suh (right) and Ziggy Ansah (left DT) draw. Fairley makes a quick inside move, gets held, fights through it anyway... and crushes Romo: 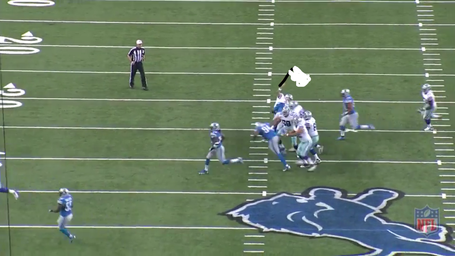 Romo goes flying, flailing his arm in the air. I'm not sure why he flails his arm in the air, so I added a white flag to make it seem more realistic. The rushed pass falls incomplete, and the Cowboys are forced to punt.

Later in the first quarter, Fairley displayed his quickness, much to Romo's dismay. 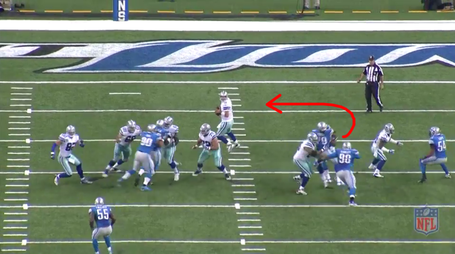 Fairley runs a simple stunt, while Willie Young occupies the offensive tackle. Fairley also uses Young as a pick for the guard trying to keep Fairley at bay. It works, and Fairley is home free. 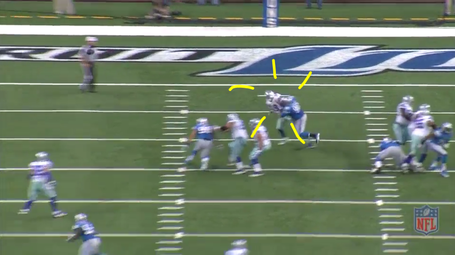 Again, this came on a third down. Again, it forced an inaccurate, incomplete pass. Again, the Cowboys were forced to punt.

Nick Fairley was so dominant in this game that even his doppelganger, C.J. Mosley, got in on the action. 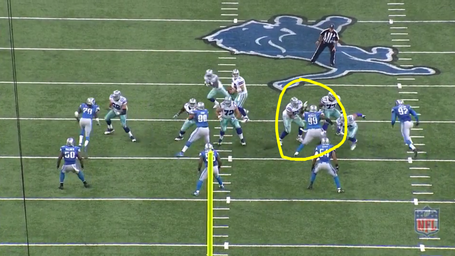 Mosley, too, was the benefactor of a Suh double-team. As you can see above, Mosley raises his hand to slap the guard's hands away from him. This is a textbook use of the club maneuver to knock the guard's arms away and slip by him. 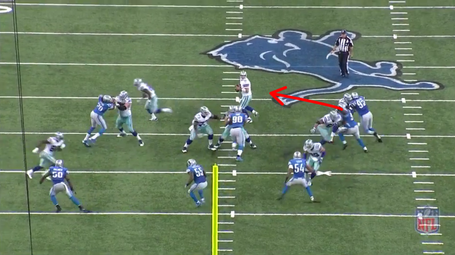 Notice how the offensive guard has no leverage with his arms because of the clubbing. Mosley has a direct path to the quarterback, which means one thing: 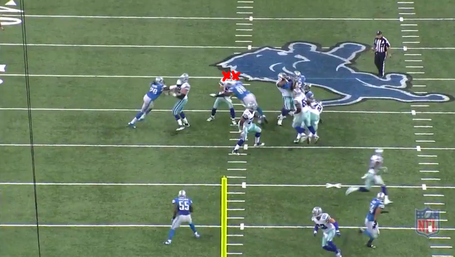 ...dead Romo. Again, the pressure forces an inaccurate pass to Dez Bryant. And after the Cowboys are forced to settle for three, it's clear they are frustrated:

Defensive line pressure was key in holding the Dallas offense at bay while Detroit was struggling to hold on to the ball. They held Romo to just 88 yards passing through three quarters. Without the strong play from their defensive tackles, the Lions would have likely found themselves down a lot more than 10 points in the fourth quarter. So while we're all congratulating Calvin Johnson and Matthew Stafford for their heroics, don't forget to give the defense a pat on the back for giving those two the opportunity to shine.