Jim Schwartz gave the Detroit Lions offensive line some well-deserved praise following the Week 4 victory over the Chicago Bears. Let's take a look at how Reggie Bush and his blockers complement each other.

Share All sharing options for: CoachSpeak: Jim Schwartz on the Lions offensive line

Last week, Reggie Bush ran wild on the Chicago Bears to the tune of 173 yards of total offense and a touchdown. As is the case with any impressive performance by a running back, Bush's success started with the blocking up front. Jim Schwartz was asked this week about the progression of the Lions offensive line. Here's what he had to say:

"...They protected well. They have also opened up some good holes in the running game. Rightfully so, a lot is made of Reggie (Bush) and the yards he has gotten in the big plays. There are a lot of times he's in to the secondary without getting touched. That's credit to the offensive line."

So, to summarize: The offensive line blocked well. Not really a sexy quote -- that's what Gunther Cunningham is for -- but not a false one, either. The offensive line did a tremendous job of providing space to run, and when that happens, Reggie Bush is able to do Reggie Bush things. Obviously, Bush's most notable play from the game was his gorgeous 37-yard touchdown run, but odds are you've watched it over the past few days. Or read about it. Or had Jim Schwartz explain it to you. The Lions employed a few different types of run plays with success last week, but I'll focus on one in particular: the inside zone. But first, a little bit of pretext.

My brothers, my father and I exchange texts throughout any Lions game. For the most part, our conversations involve a combination of wild exclamations and random vulgarity. My father, having been alive for more Lions seasons than his sons, is naturally a little more cynical in his views. After the Lions scored to go up 30-10, my brothers and I received this message: "I hope [Scott] Linehan doesn't go conservative in the second half."

On the surface, this makes sense, and I think we've all felt this sentiment before. When the Lions offense is firing on all cylinders, it's one of the most explosive in the league. And after hanging 27 points on the Bears in the second quarter, Lions fans wanted to see the offense keep attacking, not go into a shell in the second half. The thing is, a great deal of the Lions' success in the first half came from some of the most conservative play-calling imaginable. Which brings us back to the inside zone. This will be a little more complicated than other editions of CoachSpeak, but bear with me.

There are a thousand different wrinkles to the zone blocking scheme. Smart Football breaks down the basic concepts here, but the core principles can be boiled down pretty easily: Any offensive lineman with a defender lined up directly over him (defined as "covered") will block that defender. An offensive lineman without a defender lined up over him (defined as "uncovered") will double-team the nearest defensive lineman to the side of the play. Once that defender is taken care of, one of those offensive linemen will then go to the second level to block a linebacker. The running back's aiming point on an inside zone run is the offensive guard's outside hip (as opposed to the hip of the offensive tackle or tight end on an outside zone), but the running back is free to make a cut upfield wherever he finds a seam.

The Lions blocked the inside zone incredibly well last Sunday, and Bush repeatedly made the correct reads for solid gains. Let's check out one such play: 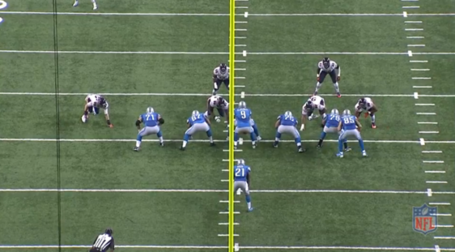 Here the Lions are in a single-back set, with Tony Scheffler lined up as a tight end/H-back on the right side. The Bears have a one-technique DT on left side of the screen (the weak side), and a three-technique on the right (strong side). The play here is going to be an inside zone run to the left. 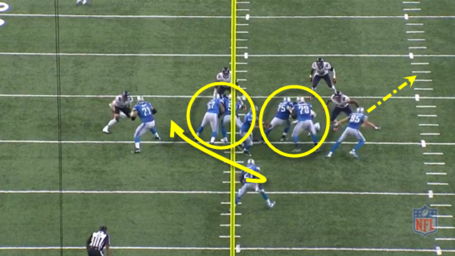 Bush takes his first step right before coming back to the left. Scheffler heads to the next level (off screen) here. Otherwise, everything starts as you'd imagine -- Rob Sims and Dominic Raiola double-team the one-technique tackle, and Larry Warford and Corey Hilliard double-team the three-technique. The defensive end on Riley Reiff's side is going to come shallow across the line of scrimmage. 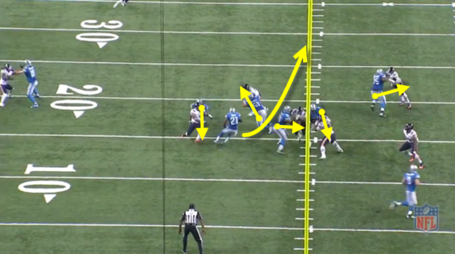 Reiff just rides his DE's momentum to the right, driving him out of the play. Sims leaves his double-team and heads to try and seal the LB to the outside. What results is a battle that carries them into the backfield, just behind the play. Not pretty, but effective enough. (And herein lies a large difference between the "inside" versus "outside" zone run -- on an outside zone play to the left, both LBs would be sealed off to the right, instead of each being pushed to the outside, providing an inside running seam.)

Warford's block is much easier on the eyes. Once the strong side LB goes across Warford's face (to the right), Big Larry seals him off and never lets him back into the play. When Bush hits the hole, he only has to make one read in front of him, and he correctly makes a jump cut to the right, behind Raiola, who is still fighting with the one-technique.

(Quick side note: Warford made some fantastic blocks throughout the day. Obviously the stats speak for themselves, but just look at him abuse former Lion Landon Cohen on a different play, allowing Bush to break one to the outside.) 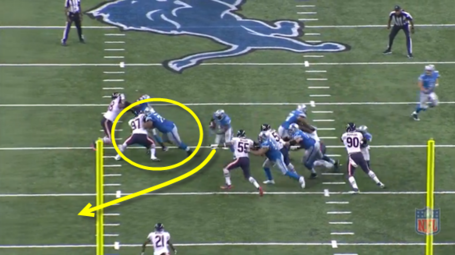 The other big part of the success of that inside zone run has nothing to do with the zone blocking scheme. Look again at that third screenshot. At this point, the play has been developing for a couple seconds, and Bush is already passing the line of scrimmage. So where are the Bears' safeties?

Just like we discussed after the Lions' Week 1 win over the Minnesota Vikings, the Bears opted to employ a two-high alignment on this play. Bush is breaking free, and the Bears' safeties are still sitting 20 yards deep. (Thanks, Calvin Johnson!) By the time he's finally tackled in the Bears' secondary, the Lions have picked up 15 yards.

This play has nothing fancy about it. Likewise, there was little fancy about a lot of the Lions' success on the ground, as it came from incredibly conservative play-calling. The trap block is as old as time, and the Lions took two of those for double-digit gains as well. But, that's what Reggie Bush does: He turns the mundane into the electric. It seems like a constant refrain at this point, but as long as teams keep trying to take away Megatron, Bush and the Lions offensive line are going to continue to have space to operate.