The Detroit Lions lost yet another road game against the Green Bay Packers, this time by a score of 22-9.

With Calvin Johnson out, it was clear that the Detroit Lions needed a lot to go their way to upset the Green Bay Packers and snap their losing streak in Wisconsin. And after Sunday's game, it's clear that the Lions offense just isn't good enough to win without Johnson. The offense was lost all day, and the defense was only able to hold up for so long. As a result, the Lions' road losing streak to the Packers grew by another game with them falling by a score of 22-9.

Given that Johnson was not playing in this game, it probably wasn't the best news that the Lions had to start things off with the ball. They did actually pick up a couple first downs, and they even got into Green Bay territory. However, a sack on Matthew Stafford killed the drive and led to a punt that went into the end zone for a touchback and netted only 25 yards.

The Packers looked like they were going to give the ball up after only a single first down, but they got bailed out by the officials. An incompletion on third-and-7 was negated by a tripping penalty on Ndamukong Suh. It's true that Suh stuck his leg out to try and take down Aaron Rodgers, but the fact that there was no flag for an obvious holding call (see below) is laughable. 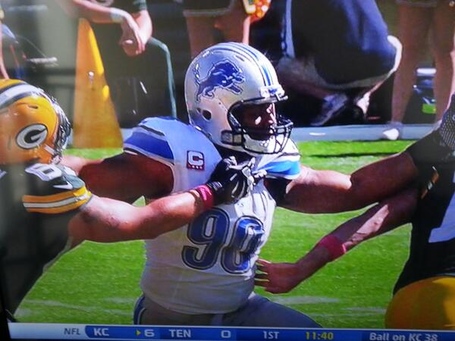 Following this free first down, the Packers went down the field and picked up a couple more third-down conversions. Eventually, the Lions did finally come up with a stop to get their defense off the field, and it couldn't have come at a better time considering it was third-and-goal from the 8-yard line. Another third-down conversion would have been a touchdown, but instead the Packers had to settle for their 15-play drive that took nearly 8 minutes off the clock producing only a field goal.

After a quick three-and-out by the Lions, it was more of the same for the Packers. This time, they had a 12-play drive that took nearly 4 minutes off the clock. It was capped off by a 52-yard Mason Crosby field goal, and once again, a questionable call by an official kept it going. On fourth-and-4 at the Detroit 40, Green Bay went for it and was stopped. However, a holding call on the defense moved the chains, allowing the Packers to get into field goal range.

Now down 6-0, the Lions still couldn't do anything on offense and had to punt yet again. They did go 15 yards on the first play of the drive, but that was it. Luckily, Sam Martin boomed a punt 58 yards, and a penalty on Green Bay (yes, it is possible for the Packers to be flagged) put the ball on the 4-yard line.

Unfortunately, the Lions couldn't come up with a stop when Green Bay was backed up near its own end zone. The Packers moved the chains on third-and-6 and third-and-15, helping them get near midfield. The Lions did make some plays before that third-and-long conversion (a forced fumble by Ziggy Ansah and a great read on a screen by DeAndre Levy), but getting off the field remained a problem. Finally, on their third chance, the Lions came up with a stop on third-and-1 thanks to Levy batting down a pass.

When the Lions got the ball back, the Packers took a couple timeouts in hopes of adding some points before halftime. However, the Lions made sure that plan backfired by moving the chains on third-and-10. Ryan Broyles picked up 22 yards, and Brandon Pettigrew went for 25 on another third-and-10 right after. The Lions got all the way down to the Green Bay 25, and Stafford had another third-down conversion on a scramble for 10 yards. However, it was called back because of a holding penalty on Riley Reiff (now the officials notice holding), and the Lions had to settle for a field goal. David Akers converted from 53 yards out, cutting the lead to 6-3 at halftime.

The second half opened with a big stop by the Lions defense. The Packers moved the chains once, but that was it. On third-and-6, Rodgers was pressured by Ansah and threw it away, leading to a punt.

The Lions unfortunately couldn't do much of anything on offense following the stop. (Are you sensing a theme yet?) They did manage to move the chains a couple times, but a delay of game penalty combined with a sack helped kill the drive.

Another outstanding punt by Martin put the Packers deep in their own territory again, but Randall Cobb quickly rendered that meaningless. On the first play of the drive, Cobb ran for 67 yards, putting the Packers on the Lions' 22-yard line. The defense rebounded nicely to come up with a stop on third-and-1, but the Packers added to their lead with another field goal.

Following another Lions three-and-out, the Packers struck with another big play, this time for a touchdown. James Jones ran right by Chris Houston, who was expecting safety help over the top. There was none, and Jones went for 83 yards and a touchdown, giving the Packers a 19-3 lead.

In desperate need of a response that included some points, the Lions once again came up short on offense. The drive got off to a promising start with a 20-yard run by Reggie Bush on a reverse, and he picked up 12 yards just two plays later. The drive fell apart once the Lions got down to the Green Bay 34-yard line, though. Patrick Edwards had the ball go right through his hands in the end zone on a pass that was defended but still should have been caught, and Stafford was sacked for a loss of 12 yards on the very next play. This took the Lions out of field goal range and ensured that the Packers would remain on top by 13 points.

The Packers followed this up with yet another field goal. They drove down to the Detroit 24 thanks in part to a ridiculous catch by Jordy Nelson for a gain of 31 yards. This put the Packers in Detroit territory, and they picked up a first down on a third-and-5 on a scramble by Rodgers to keep the drive moving. The Lions made a stop after this, but Crosby's latest field goal increased the Green Bay lead to 16 points.

The Lions did finally show some life on offense on their next drive, but the result was still no points. Pettigrew made a couple of nice plays to go for 19 and 10 yards, putting the Lions in Green Bay territory. The Lions followed this up with a 7-yard run by Joique Bell, but 3 incompletions later it was a turnover on downs. One of those incompletions was a drop by Tony Scheffler, and another involved Kris Durham slipping and falling before the pass got to him. Yeah, it was that kind of a day for the Lions.

The Packers added on to their lead one more time with a 45-yard Crosby field goal. This gave them a 22-3 lead, and it was set up by a 39-yard pass to Jones, who beat Houston again. Jones appeared to beat Houston for a 27-yard touchdown later in the drive, but the play was overturned upon further review since he didn't get two feet down inbounds. It didn't really matter, because the field goal made this a three-possession game and ended any hope of a miracle comeback.

The Lions did at least finally find the end zone on their next drive. They moved down the field on a 16-yard pass to Bell and passes of 17 and 19 yards to Scheffler, who drew an unnecessary roughness penalty on his second catch of the drive. That moved the chains after another sack on Stafford, who went on to find Durham for a 13-yard touchdown. The ensuing two-point conversion was no good, and Green Bay went on to recover the Lions' onside kick attempt, effectively ending the game.

The Lions' 22-9 loss comes as no surprise given the venue and the lack of Megatron, but it was still disappointing that they played so poorly on offense. The defense did a pretty solid job in the first half, but with nothing from the offense, it was evident that the Lions were in deep trouble. Hopefully things will be different next week at the Cleveland Browns, regardless of whether or not Johnson plays.