A detailed breakdown of how the Green Bay Packers found a chink in the Detroit Lions armor and then exposed it for an 83-yard touchdown pass.

Share All sharing options for: Film review: How the Packers exploited Louis Delmas

The Detroit Lions held the Green Bay Packers offense in check for the first half on Sunday. Aaron Rodgers was a mere 10 for 16 for 87 yards with no touchdowns after two quarters. However, it turns out Rodgers was just setting the Lions defense up to exploit them later in the game. His primary target? Louis Delmas.

After the game, Packers head coach Mike McCarthy explained, "The opportunities outside first started with the late safety rolling down into the box and them playing soft on the outside." In other words, they saw Delmas cheating into the box, leaving the outside edges wide open. So, I ventured to see what they saw early in the game, and how it led to an easy 83-yard touchdown.

Rodgers and the Packers first saw Delmas cheating early in the second quarter on a second-and-9 play: 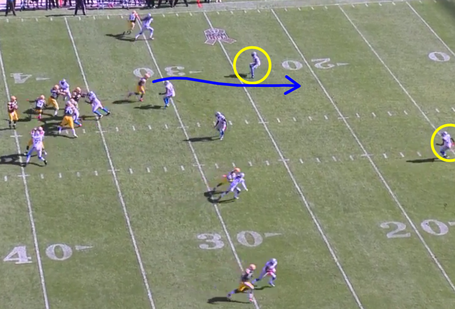 It should be noted that the Lions don't appear to be in cover two on this play. Glover Quin immediately shades toward the middle of the field to play lone center field. However, Delmas immediately jumps down into the box, anticipating a run on the play action. He finds himself flat-footed in his zone and allows the receiver running a seam route to blow by him. 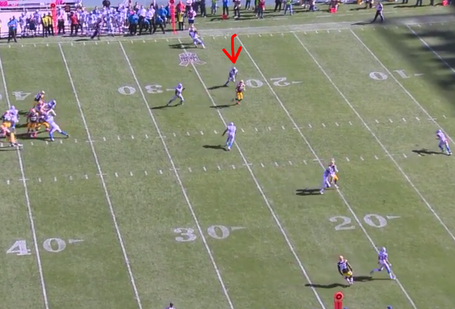 Luckily, Rodgers just misses him. But the seed has been planted.

The next play is a clear example of what the Packers must have saw in order to exploit Delmas' aggressiveness. 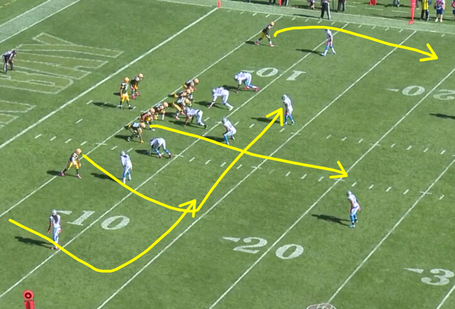 The key routes here are the seam route by the tight end and the familiar go route at the top of the screen. Delmas is just off screen to the top. It's pretty clear from the get-go that the Lions' safeties are playing deep, cover-two defense on this third down (the Lions' corners are in man coverage). 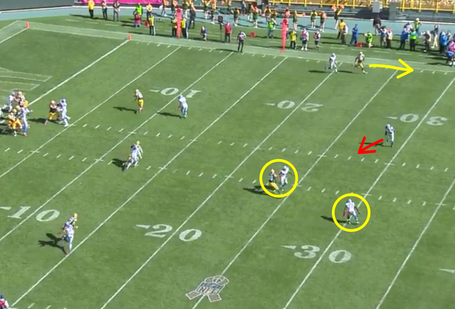 Delmas is reading Rodgers' eyes the entire play. This would be a good thing for a poor quarterback who likes to look down his receivers. However, we know Rodgers is better than that. Delmas sees Rodgers looking at the seam route and shades that way, completely ignoring the go route at the top of the screen.

This is a clear example of Delmas trying to make a play he has no business making. The seam route is covered man to man, and Quin is also in position to make a play if the ball is thrown that way. Delmas needs to trust his teammates and stick to his own assignment. Again, the Lions were bailed out, as Rodgers didn't see the go route and instead hit a dig route for a first down.

Unfortunately for the Lions, the third time was not a charm. 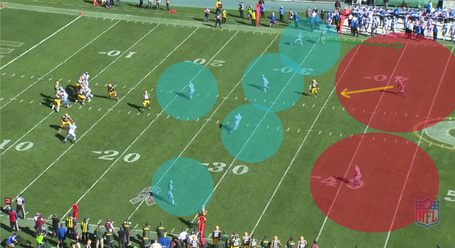 This time, the Lions are in a full cover-two zone. Again, Delmas is trying to read Rodgers' eyes and sees him looking down the seam route. Delmas tries to jump it, leaving James Jones completely uncovered. Jones is not Chris Houston's assignment after leaving his zone.

The seam route looks pretty open, but it would have been a challenging pass to split both Bill Bentley and DeAndre Levy (both of whom should have been a bit more aware of the seam route and played a bit deeper). Regardless, that was not Delmas' play to make, and again, he should have trusted his teammates and stuck to his own assignment.

This was a perfect play for the Packers to run. They saw Delmas' tendency to jump the seam route, kept Quin busy with his own go route at the bottom of the screen and caught the Lions in a zone, leaving Jones completely unguarded. However, if Delmas were to play a little more conservatively, they may have lived to see another play.