Share All sharing options for: CoachSpeak: Jim Schwartz on the Lions' returners

Shortly before last week's game against the Dallas Cowboys, the announcement was made that Detroit Lions return specialist Micheal Spurlock would be inactive. Recently added wide receiver Jeremy Ross would handle kick return duties, while Ryan Broyles would field punts.

Ross handled himself well in his first game as the Lions' kick returner, sparking a scoring drive by returning a kickoff back to the Lions' 37 -- easily their best kick return of the season. As a slight bonus, he also added 1 catch for 7 yards.

Most saw this as a switch in who would handle return duties. However, Jim Schwartz was quick to downplay this notion:

"I saw it was reported that we had benched (Micheal) Spurlock and that's not the case. I don't know if anybody noticed, we kept up eight offensive linemen. We had to keep up four tackles because of our injury situation. [Spurlock] happened to be the one spot we knew we were going to have a lot of defensive backs available for some of their four and five wide receiver stuff. It was just roster management."

Just roster management. So, the Lions coaching staff wanted to account for depth -- or a lack thereof -- at certain positions. Let's think about that statement and how it applies to the Lions' return situation going forward.

Since the rule change advancing the point of the kickoff to the 35-yard line, the value of the kick returner in today's NFL has been greatly reduced. The shorter field results in more touchbacks, which provide fewer opportunities for a returner to impact the game.

Whether or not to keep a return specialist on the active roster for game day is a decision every NFL coaching staff has to make. Given the players on the roster, some choices are easier than others -- I doubt you'll see the Chicago Bears keeping Devin Hester in street clothes. But since the value of a return specialist has been so diminished, keeping one on the roster becomes a more difficult call.

Any specialist on an active roster should be a master of his craft. He should be so valuable, and so uniquely valuable, that the drop-off from the specialist to an alternative player is outright terrifying. Essentially, he should be (Pro Bowler!) Don Muhlbach.

Unfortunately, none of the previous three sentences describe Spurlock, and his numbers through the first seven games of the season provide painful evidence of that.

Spurlock has fielded a total of 36 kickoffs this season. Of those 36 kickoffs, 28 have resulted in touchbacks. Here is how the other eight have gone:

7. Tackled at the 16 (Illegal formation penalty on the kicking team; ball placed at the 21)

Based only on where Spurlock is tackled, the average result of his kick returns is just short of the 20-yard line. Statistically speaking, Spurlock's average kick return this season has been less effective than a touchback.

Enter Ross, he who breaks the chains that bind the Lions' return game. What has Ross done on his kick returns this year?

Like Spurlock, the majority of Ross' kickoffs (15 of 23) have resulted in touchbacks, but he actually takes the ball out of the end zone at a higher rate. Given that Ross was released by the Green Bay Packers earlier in the season, you can probably imagine what happened on those plays:

1. Tackled at the 8 (Illegal block on the Packers; ball placed at the 4)

5. Fumbled at the 2, recovered by kicking team

So, like Spurlock, Ross' average point of being tackled starts his team's drives before the 20-yard line. Without penalties, he's just shy of the 17. On the plus side, Ross did have one kick go out of bounds at the 1-yard line, so clearly he's enough of a threat that he gets inside kickers' heads.

Since neither of them looks like a game-breaker by any stretch of the imagination, the blocking on kick returns becomes more important (to state the obvious). Here, the Lions find themselves lacking a bit. 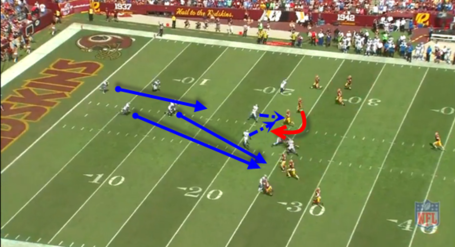 Here's the first kickoff that Spurlock took out of the end zone back in Week 3. The two blockers in the center of the front line are going to double up on the Washington player coming down the left hash mark. The two-man wedge is going to come toward the bottom of the hashes to take on that group of three defenders coming through the hole below the double-team. 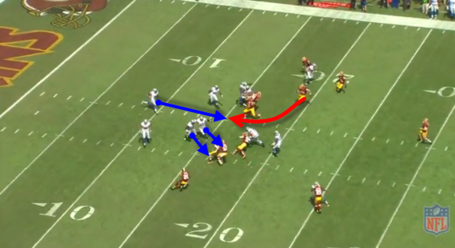 Meanwhile, the blockers at the 20 (one by each hash) are going to move to take on the two defenders coming just above the hash marks at the top. Unfortunately, both end up taking on the same man, leaving the top defender to come through the hole and make a tackle at the 15 after another Lions blocker runs past him. Not really Spurlock's fault, but he certainly didn't make anyone miss, either. 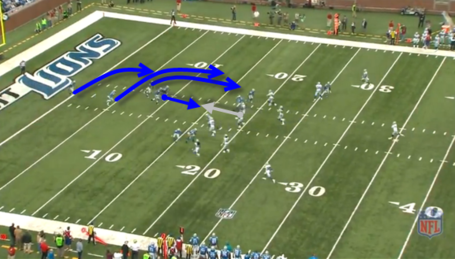 Here's the beginning of Ross' kick return against Dallas last week. Ross is going to take this toward the top, right about at the numbers of the 20. The top three Lions blockers are all engaging with different Cowboys. Once the two-man wedge engages the coverage men coming down the middle, Ross is simply going to follow his blockers through the hole. 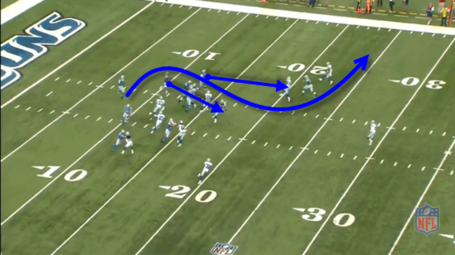 To his credit, Ross slips a tackle right around the 20 before taking the kick another 17 yards, resulting in the first solid kick return the Lions have had all season.

Whether the Lions have Spurlock or Ross return kicks, they'll be starting a statistically below-average return man. But that's the point: neither of them is particularly good. Two or three yards of average field position isn't enough to justify the fact that Spurlock offers essentially nothing outside of his position as a returner. Obviously John Bonamego isn't going to start telling the Lions returners to take a knee on every kickoff (although it might seem like a good idea). But, in the event of a kick return, Ross has shown that he presents as much of a possibility for a solid gain as Spurlock.

Beyond that is the fact that Ross can be inserted as a fifth or even fourth wide receiver. And in a passing offense, you need wide receivers. Just as Schwartz said, you have to make decisions based on roster management. Given that the Lions' wide receiver corps has now faced two serious injuries and a release in the first half of the season, keeping Ross on the game day roster makes more sense, based on the exact same logic Schwartz uses to deflect reporters' questions.

Of course, the Broyles injury (sigh) complicates the issue a bit, as Ross doesn't have a lot of experience fielding punts. But, for what it's worth, the two he has fielded this season have resulted in 20 yards. Obviously, that small sample size should be taken with an enormous grain of salt, but Ross' average is 3 yards higher than Spurlock's over the course of the season, even with his 57-yarder against the Bears. Depending on Nate Burleson's health, the point may be moot, since the Lions need Ross as a wide receiver right now anyway.

So, given this information about Micheal Spurlock and Jeremy Ross in the Lions' return game, what can we expect coming out of the bye week, Schwartz?