Our preview analyzes the key matchups between the Detroit Lions and Pittsburgh Steelers.

Share All sharing options for: On Paper: Detroit Lions at Pittsburgh Steelers

The Detroit Lions (6-3) are riding high after sweeping their rival last week in Chicago. They now sit atop the NFC North and control their postseason destiny. The Pittsburgh Steelers (3-6) remain clinging to playoff hopes in an inconsistent AFC North. They currently sit 2.5 games behind first place, but with a division-heavy schedule left to play, the Steelers could still pull it out. On the surface, it seems like the Lions are clearly the superior team, yet Vegas only favors them by a point or two. Let's see if the charts agree.

Aside from the games against the Bears, the Lions have surpassed yardage averages of the defense in every contest this season. In terms of passer rating, the Lions have hovered around the defense's average in most of their games this season. However, Matthew Stafford has been incredibly consistent this year regardless of his opponent. Seven of his nine games have resulted in a passer rating between 87 and 97.

A lot of the Lions' success has been dependent on good pass protection. Detroit has allowed only 10 sacks all season, the fewest in the league. Strangely, half of those sacks came in one game (against the Packers).

Of course, the Lions passing attack is led by Calvin Johnson, who ranks second in the league in receiving yards despite missing a game due to injury. He is still fighting off his knee injury and may be questionable to play this game, but I would be very surprised to see him on the sideline on Sunday. Calvin aside, the Lions have been relying on Brandon Pettigrew more often lately, and he has risen to the challenge. Pettigrew has now caught 26 of his last 34 targets (76.5 completion percentage). In comparison, Johnson is only catching 55.2% of his targets.

The Steelers' pass defense is clearly their best unit on the team. They failed to hold opposing offenses below yardage averages in just two games this season, and only three times in terms of passer rating. However, there are two major outliers on this chart: the Vikings and the Patriots. Both teams had monster days against the Steelers defense. The Patriots' success makes sense because: Tom Brady. But why did Minnesota succeed? Well, both the Patriots and Vikings were actually extremely successful running the ball against the Steelers as well. So if you are a balanced offense, you've got a chance against this decent pass defense.

Overall, Pittsburgh ranks 17th in passer rating allowed (85.8), 11th in yards per attempt allowed (6.8) and 19th in completion percentage allowed (60.9%). This tells me that the Steelers' high ranking is more based on their opponents than their actual defense. In reality, seven of their past nine opponents are averaging less than 240 yards per game through the air. While their defense is definitely above average, they are not a top five pass defense.

Player to watch: Ike Taylor. Taylor has been the Steelers' shutdown corner this season. He held A.J. Green to just 6 catches and 41 yards on 14 targets in Week 2.

Advantage: Lions +1. This will be a tough challenge for the Lions passing attack, especially being on the road. However, the Lions really stepped up their passing attack against Cincinnati and Cleveland, which both bolster impressive pass defenses. Additionally, the Steelers don't have much of a pass rush threat. They only have 16 sacks on the season (fifth fewest). 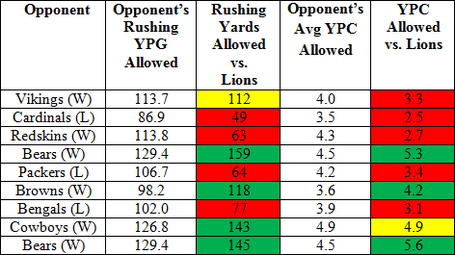 After a pretty poor start, the Lions seem to getting a hang of this running thing lately. They have met or surpassed yardage and yards per carry averages in four of their past six games. In those games, however, they haven't faced any particularly good run defenses, with the exception of the Browns.

Though the Lions rank t-16th in yards per carry (4.0), they are still gaining first downs at an impressive rate. 25.2% of their running plays earn a first down, which is the fifth-most efficient in the league. 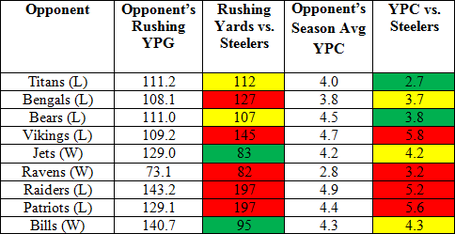 The Steelers have struggled against the run all season. They have held only two teams under both yardage averages and YPC averages. Last week was a step in the right direction, holding a good Bills rushing attack to just 95 yards, but they still averaged a decent 4.3 yards per carry.

Advantage: Lions +1.5. While Detroit has been inconsistent on the ground all season, they have no excuse not to get things going in the running game this week. This is a key matchup because Pittsburgh has struggled mightily against well-balanced offenses. Chances are the Steelers will start off trying to shut down the passing attack, so Bush and company will have to take advantage early. 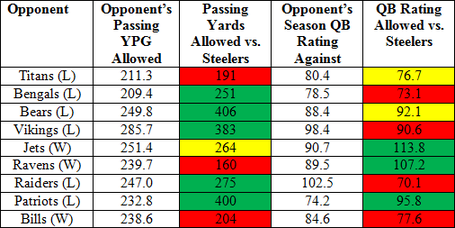 Ben Roethlisberger and the Steelers pass offense are not quite what they used to be. That being said, they are still an above-average unit. They have met or surpassed yardage averages in all but three games (two of which were wins) and were only held below passer rating averages in four of nine games.

Where they seem to struggle, however, is with pass protection. They have been sacked the second-most times in the league (36). Part of this is due to Roethlisberger's tendency to hold on to the ball for long periods of time, but part is due to a patchwork offensive line.

The Lions pass defense isn't as strong as believed at the beginning of the year. After holding their first four opponents at or below passer rating averages, they have only held one below averages since. In terms of yardage, the Lions are one of the worst in the league, allowing almost every opponent to outdo their averages.

Overall, the unit isn't horrible, but it's clear they are below average. With Bill Bentley likely sidelined for at least another week, Detroit isn't likely to have a dominant game on defense.

Player to watch: Antonio Brown. Brown is the short, speedster type of wide receiver that always seems to give the Lions fits. Brown currently ranks t-fifth in the league in receiving yards and is a big threat to move the chains, ranking fifth in first downs.

Advantage: Steelers +1. From the numbers, I get the feeling Pittsburgh will be able to move the ball fairly consistently through the air. However, the X-factor in this matchup is Detroit's defensive line. If the Lions can get to Roethlisberger, they will end drives abruptly with sacks and turnovers. I like the Lions' chances, especially with Big Ben's tendency to hold on to the ball too long, but I still expect him to evade a few sacks, resulting in big plays. 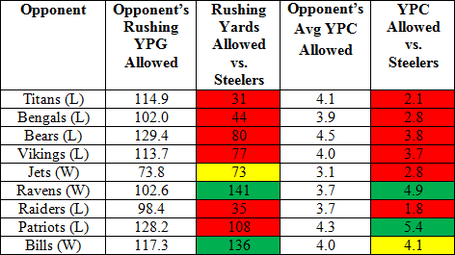 After an awful start, the Steelers running game appears to have turned a corner. They still have only outgained averages in two games this year, but they have hit the century mark three times in the past four games.

Part of the reason for this turnaround is the emergence of Le'Veon Bell, who has been battling an ankle injury all season. Bell has 248 rushing yards over the past four games, averaging 3.54 a carry during that span. While those numbers aren't exactly fantastic, they are a big improvement over the first four games of the season. 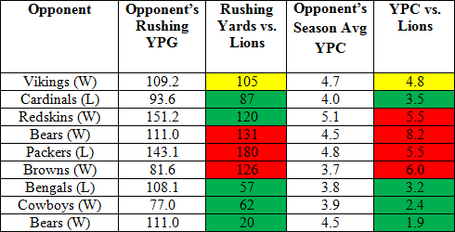 The Lions run defense has turned it around in a big way. In the past three games, the Lions have allowed a TOTAL of 139 yards at just 2.2 a carry.

Overall, Detroit is shooting up the rankings in the NFL. They now rank second in first down percentage allowed (15.8% of rushes result in first downs). However, we cannot forget the defense's susceptibility to giving up the big play. They have still given up the most rushes of 40+ yards (4), and they are tied with the 10th-most rushes of 20+ yards (7). This has resulted in a subpar YPC-allowed number (4.5., t-25th). But if the Lions can continue to avoid giving up the long play, this number will even out.

Overall, the Lions run defense remains stout for a large majority of the plays, but when they break, they break bad.

Player to watch: Ndamukong Suh. Suh remains a hugely disruptive force in the middle of that defense. While he's been mainly touted as a great pass rusher, he has largely improved on his run defense this year and will create trouble for whoever he is lined up against.

Advantage: Lions +1. While a long play is always a possibility with this defense, the Steelers don't really have a home-run threat. Their longest run of the season is 30 yards and they have only four rushes of 20+ yards (t-19th). Detroit should win this matchup.

Another road drought. Once again, the Lions will be heading to a city they haven't won in since before most of us were born. This time, we have to go all the way back to 1955 to find a Detroit victory in Pittsburgh. But that didn't seem to matter too much in Washington earlier in the year.

Again, "On Paper" correctly predicted a Lions victory. The final score (21-19) was somewhat close to my prediction of 27-23. That moves "On Paper's" record to 7-2 on the season.

Last week's comment section winner was Hendo44, with a prediction of 23-20. Here is your prize, Hendo: 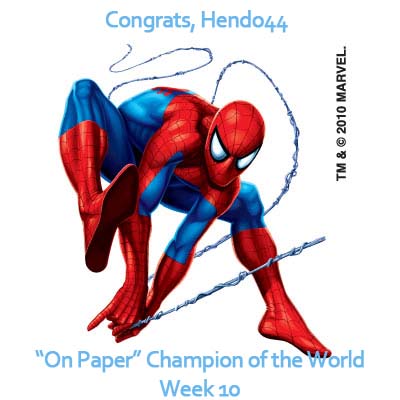 That's a state-of-the-art, customized Spiderman temporary tattoo. Normally, that would cost you 20 tickets, so savor it!

The Lions end up with a +2.5 advantage, which is fairly significant by "On Paper" standards. Detroit also has the advantage in three of the four matchups. Even though the Steelers are probably better than most people are giving them credit for, and Pittsburgh is not an easy place win, the Lions should win this game. They are a balanced offense, which should give the Steelers fits on defense. And the Lions defensive line is a nightmare matchup for the Steelers' ailing offensive line. Therefore, the Lions win a fairly decisive game: Lions 27, Steelers 17.