The Detroit Lions' run defense has jumped 21 spots in league rankings over the past three weeks. What's changed?

Share All sharing options for: CoachSpeak: Jim Schwartz on the Lions' run defense

So, last Sunday felt pretty great, huh? The Lions went into Chicago and completed the season sweep of the Bears -- even typing that sentence gives me indescribable pleasure -- and are now firmly in control of their destiny. During a game in which both starting quarterbacks completed around 50 percent of their passes, the running game took on increased significance. In that regard, the Lions' run defense was up to the task, said Jim Schwartz:

"We were strong in some areas. I thought we did a really good job against [Matt] Forte, a player that we have a lot of respect for. A player that has made a lot of plays against us in the past. I think he had about 50 yards of total offense. I think that went a long way to us being able to keep the scoring down and come out with a win."

Let's be specific, coach: 49 TOTAL YARDS. Against Matt Forte, you have to be happy with those results. Recently, though, it hasn't mattered who carries the ball for the opposition, and if you've been keeping up with your Lions notes, you're already aware of this trend. Over the past three weeks, the Lions have jumped 21 spots in rushing yards allowed per game, from 29th in the league to eighth. Over that time, they've only allowed 5 rushing first downs, which is probably the more impressive stat. (For a comparison, the Lions allowed an average of 4.5 rushing first downs per game over the first six weeks.)

If you're into analytics, you're likely aware that yardage defense isn't necessarily the best indicator of success. And in the interest of fairness/being a downer, I'll note that Pro Football Focus currently has the Lions ranked 23rd in run defense. Even so, you don't leapfrog more than half the league unless you're doing something right. So, the big question is, what's happened with the run defense lately?

My initial thought was that perhaps teams have been running the ball less against the Lions lately. Logic says no -- the Lions haven't been jumping out to huge leads, so opponents haven't had to play catch-up -- and the stats back that up: through the first six games, Lions opponents averaged 22.3 rushes. Over the past three games, that number has actually slightly increased to 23.6. Let's look elsewhere.

The easy place to start is big plays -- since this is CoachSpeak, we'll refer to them as "explosion" plays, defined in the Jim Schwartz lexicon as those that gain 20 or more yards. Big gains disproportionately affect yardage totals and averages -- think about the defense's performance against Adrian Peterson in Week 1. In the last three games, the Lions haven't let anything in the run game disproportionately affect the box score; the defense has not given up a single explosion play on the ground.  They gave up seven in their first six contests, and the end-around played a big factor in those gains.

There's no real schematic secret to defending an end-around. Either your play-side defensive end has to get deep into the backfield or your linebackers have to recognize the play before it develops and stay off blocks. Either way, what you can't do is have your entire front seven bite on the run fake: 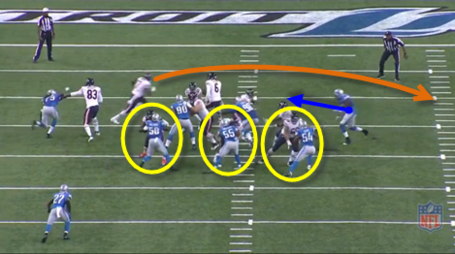 Suffice to say this did not end well for the Lions.

The Lions got burned on end-arounds a few times in the beginning of the season. Eventually, like an idiot child with blisters on his fingers, you have to learn to stop touching that hot stove. Sure enough, the Lions did, but it didn't stop teams from testing them. The last four end-around attempts (all by the Bears and Cowboys) against the Lions have gone for a combined 11 yards. 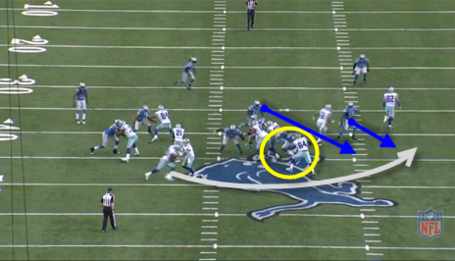 Compare this shot to the first. Pay particular attention to Stephen Tulloch. In the first play, Tulloch crashes down on the play fake and engages with his blocker. In the second, he stays back, free of contact, and is already running toward the sideline (along with Ashlee Palmer) as the play develops. The defensive end still got sucked in and kept shallow, but the linebackers stayed free and chased the play down for no gain.

So, the Lions have avoided the big play, but that doesn't tell the entire story of their improvements against the run. (Nor does one column, of course, but that's beside the point.) They've also made incremental improvements in non-explosion plays, as well. Runs that may have gone for 10 or 11 yards in the beginning of the season have recently been going for marginal gains. Just as with end-arounds, the discipline of the linebackers has played a significant role in that improvement.

Tulloch and DeAndre Levy probably have as much space to work as any set of linebackers in the league, thanks to nearly constant double-teams against the Lions' interior defensive linemen. In the early part of the season, the Lions' linebackers got a little aggressive with that space and had a tendency to over-pursue to the hole on runs between the tackles. That pursuit left them vulnerable to cutbacks. Jeremy Reisman actually outlined this tendency earlier in the season, but here's a reminder of what it looks like: 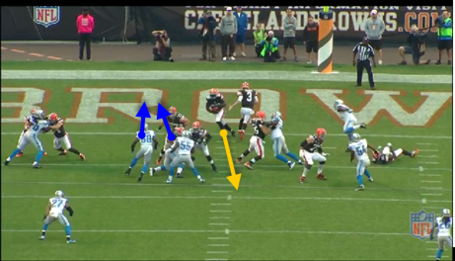 DeAndre Levy and Stephen Tulloch quickly diagnose the running back's target off-tackle. This is a good thing. However, Tulloch over-pursues to the point of attack, allowing the RB to make a quick cutback for an easy 10-yard gain. This is not a good thing, and was made worse by the fact that it happened multiple times.

Recent developments suggest that Tulloch is an avid reader of Reisman's film reviews, though. Immediately following this game -- the Lions' sixth of the year -- the linebackers began maintaining their gap integrity, and the run defense began coming to life. 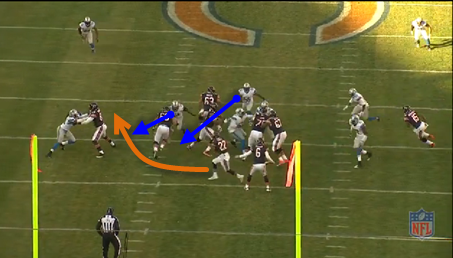 Here's a play from last week's game against the Bears. Because of the number of plays I want to show and the limits on the number of screen shots per article, I can only show one shot per play, but I'll try to describe what happened as clearly as possible.

The Bears line up in the shotgun, with Forte to the right of Jay Cutler. At the snap, Forte draws left across the formation, taking the handoff. Levy fills his gap and takes on his blocker (58). Tulloch, instead of coming over top of Roberto Garza (63) to the play side (it almost looks like Garza expects it), crashes down behind the run, eliminating the possibility of a cutback. Meanwhile, Levy sheds his block and makes the tackle for a gain of a yard.

Here is the exact same play from earlier in the game, only with Levy maintaining the backside gap: 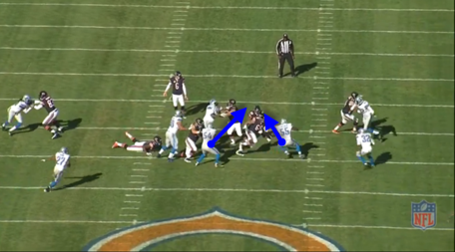 Levy and Tulloch both had outstanding games against Chicago. Pro Football Focus graded Tulloch out at a remarkable +6.3, calling his play "quite simply the best and most complete performance we've graded at the middle linebacker position all season." Levy's play may not have been as flashy, but he showed up on tape in ways that didn't show up in the box score, as this week's film review noted.

The Lions' linebackers have solidified their play in the middle, but the defense has also struggled containing runs on the fringes. As much as we all expected bigger things from Darius Slay, in my mind the most disappointing CB on the Lions has been Chris Houston. Obviously, Houston had a rough first half, culminating with his benching against Cincinnati. But, some of his struggles against the run occurred long before that. 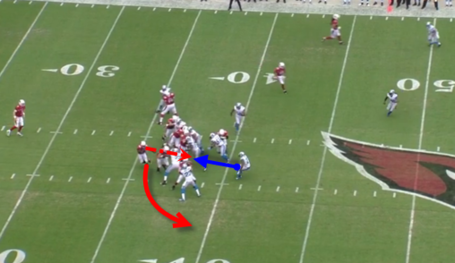 Rashard Mendenhall gets the ball on an off-tackle run here (way back in Week 2). The play-side defensive linemen leave only a narrow running lane, and Glover Quin is in a position to fill that running lane. Mendenhall opts to cut outside, where Houston (bottom) is caught up with a blocker. Houston is unable to disengage, and Mendenhall gets around him before being tackled by Quin 11 yards downfield. 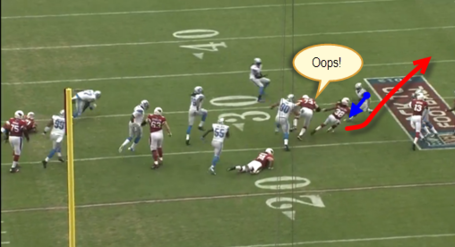 Even when free from blocks, Houston has had difficulty making tackles in the open field. Here, the Cardinals run Andre Ellington to the outside. Ellington follows his lead blocker (73) to the outside with room in front of him. However, the lead blocker actually stumbles and falls, which you can see in the image, leaving Houston free to simply come in and make an open-field tackle for a stop. Unfortunately, that stop doesn't come. Houston misses a tackle, and worse, he misses it to the inside. Ellington gets downfield for another 10 yards.

You often hear announcers discuss how quarterbacks will target a shaky DB in the passing game and test them right away. The same thing seemed to happen last week against the Bears, only Chicago opted to try and pick on Houston with the run.

Here, the Bears fake the dive with Michael Bush and flip the ball to Forte to the weak side of the formation. (Shades of 2009 Scott Linehan and Maurice Morris!) A number of defenders get caught up in blocks -- except for Houston, who pulls a slick inside move to get off the block and makes a shoestring tackle on Forte for a loss. 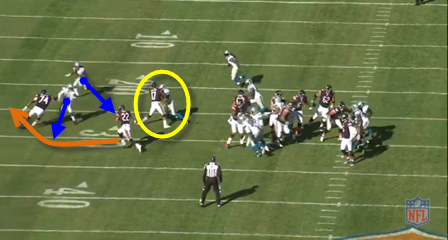 Chicago also tried to go after Houston without resorting to any trickery: 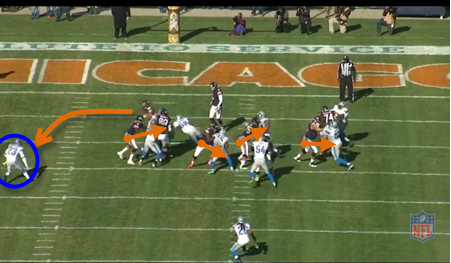 At the snap, the Bears' offensive line simply washes everything down inside, leaving Forte coming around the edge against you know who. But this is the new and improved Chris Houston we're talking about. He lines up Forte and delivers a CRUSHING BLOW.

Actually, he gets run over, and sort of hugs Forte onto the ground. But a tackle's a tackle. As Schwartz would say, you don't get style points, and what would have probably been an easy 10 yards and a first down weeks ago instead goes for a gain of two.

As much as I'm convinced of the improvement (and continued success) of the Lions' linebackers, I'm less than convinced about Houston's continued ability to defend the run. Both of these tackles were difficult to make, and kudos to Houston for making them. But honestly, each was a bit of a coin flip between bringing down Forte or getting juked or trucked, respectively. To his credit, Houston has climbed his way back to an even 0.0 grade on PFF, so he has ascended from bad to mediocre, at least by their standards. But the Bears attacked the edge a lot against the Lions, and they did it for a reason. I'd bet we continue to see that, particularly if Ziggy Ansah continues to stay on the sideline.