A look at the Detroit Lions' precision plays of Week 11.

Share All sharing options for: Lions' precision plays of Week 11

Test how precise your football knowledge is by playing the Precision Play of The Week for a chance to win Super Bowl tickets – brought to you by Gillette Fusion ProGlide, precision comfort, even on sensitive skin.

From a timing standpoint, our one-time look at the Detroit Lions' "precision plays" of the week would have been much more enjoyable last week after a victory. However, even though the Lions lost on Sunday to the Pittsburgh Steelers, they still had some outstanding plays, mainly in the second quarter. Allow me to throw my hat into the film review ring for a change with three precision plays from Week 11.

The first precision play came about four and a half minutes into the second quarter. Down 17-3, the Lions sparked their rally with a one-play drive that featured a 79-yard touchdown pass from Matthew Stafford to Calvin Johnson. At the beginning of the play, Stafford went to his right, came to a sudden stop and made an awkward-looking throw downfield. 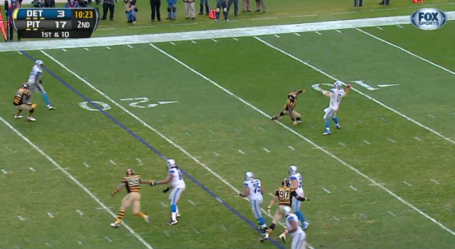 It wasn't exactly conventional, but the throw worked out perfectly. Stafford put the ball short of the only defender near Johnson, allowing Megatron to easily make the catch. 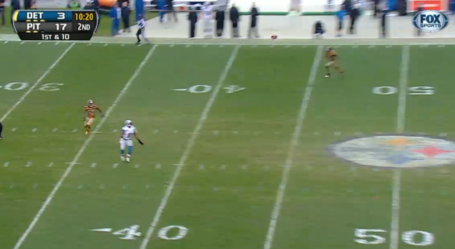 Johnson took care of the rest by brushing aside a pretty weak tackle attempt from Ike Taylor before leisurely jogging into the end zone for the Lions' first touchdown of the game. 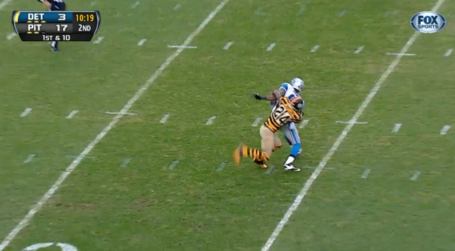 The Lions' second touchdown of the game also involved Stafford and Johnson. On Detroit's very next drive, the Lions quickly moved down the field with gains of 31 and 25 yards through the air on back-to-back plays. On the very next play, Stafford found Johnson open yet again, and he made the catch for a 19-yard touchdown. 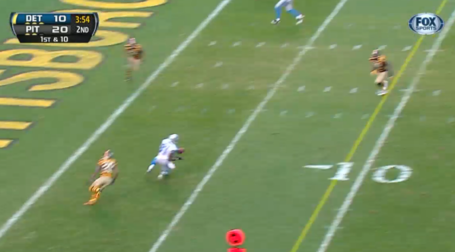 This catch really showed off Johnson's athleticism. Stafford did a nice job of using the space Johnson had created to put the ball right on target, and Johnson, again, did the rest. He made the catch a few yards short of the goal line, as seen below. 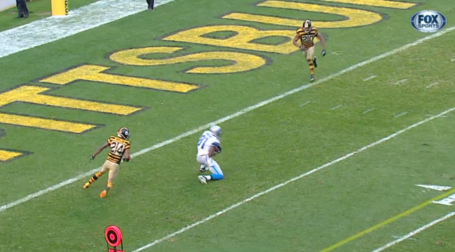 Johnson quickly went from catching the ball to fully extending toward the goal line to get into the end zone. The move resulted in his second touchdown of the game, and it put the Lions down by only a field goal. 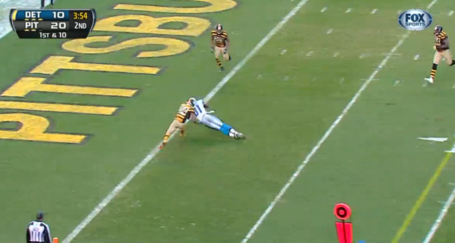 The final precision play of the week came on the Lions' next drive, and it helped set up their go-ahead touchdown before halftime. A 23-yard pass to Johnson put the Lions in Steelers territory, and a perfect screen pass to Joique Bell resulted in a gain of 37 yards. You could tell right from the start that this play was going to go for a big gain: 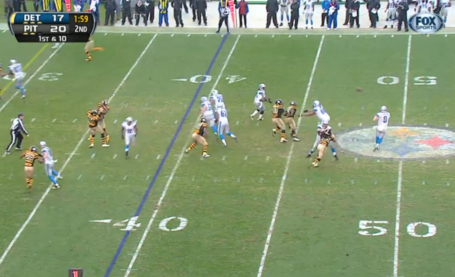 It actually looked like Bell might score on the screen considering how much room he had to work with. What's more, he had multiple guys downfield either already blocking or in position to make a block. 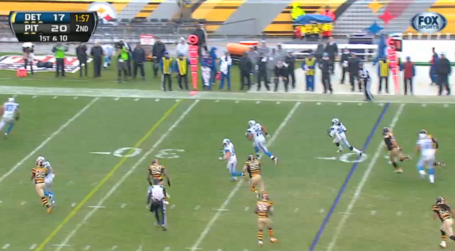 Bell ended up going for an extra 20 or so yards thanks to a block Larry Warford put on Troy Polamalu. Between Warford's block and the help Bell got from a couple receivers, he was able to get all the way down to the 2-yard line, and he ran the ball in for a touchdown two plays later to give the Lions a 24-20 lead. 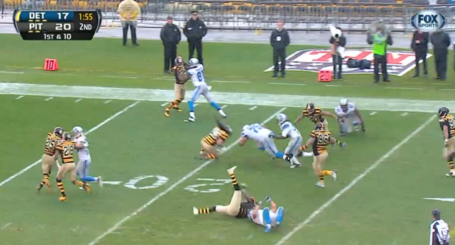 The Lions didn't win, but these three plays contributed to a beautiful second quarter for the offense. The Lions were really unstoppable for a few drives, and with the touchdowns to Johnson and the screen to Bell, they showed just how explosive the offense can be when everything is clicking.