The Detroit Lions face the Tampa Bay Buccaneers this week in an important NFC matchup. Here's our preview.

Share All sharing options for: On Paper: Detroit Lions vs. Tampa Bay Buccaneers

The Detroit Lions (6-4) will try to rebound from last week's loss as the Tampa Bay Buccaneers (2-8) come to town. The Bucs are riding a two-game win streak after disposing of the Miami Dolphins and Atlanta Falcons. Prior to that, they almost stole a game from the Seahawks in Seattle, falling eventually in overtime after jumping out to a 21-0 lead. Despite their poor record, they are playing some decent football right now. The Lions, on the other hand, had a disappointing showing in Pittsburgh last week and now hold a very tenuous grasp on the NFC North lead over the Chicago Bears. This game obviously means a lot more to the Lions, but motivation aside, let's look at the talent of the two teams. 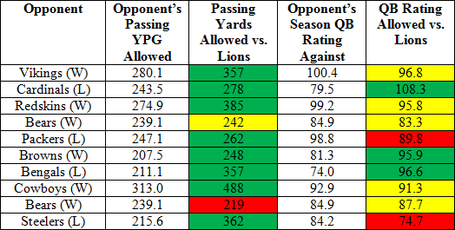 The Lions continue to rack up the yardage against their opponents, but what's more interesting are their pedestrian passer ratings. In half of their games this year, they have met their opponents' average passer rating against, but not surpassed it. We all know that the Lions throw the ball more than most teams, but it seems like they are a more average team in terms of passing efficiency.

The raw data doesn't seem to agree, however. The Lions rank eighth in passer rating (92.0), t-seventh in yards per attempt (7.6) and t-19th in completion percentage (59.2%). By most measures, this is an above-average passing team, so why the mediocre chart? Well, it has to do with their strength of opponent. The Lions have only faced three pass defenses ranked in the top half of the league (by yardage).

The Lions may get a boost, as Nate Burleson is expected back this week. Burleson was averaging nearly 80 yards per game before breaking his arm while nobly saving a helpless pizza. 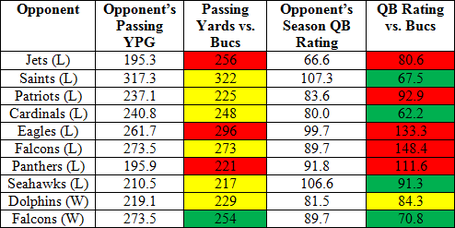 The Bucs pass defense has been a mixed bag all season. They clearly hold opponents very near their yardage averages, but opponents' passer ratings have been all over the place this year.

Player to watch: Darrelle Revis. Revis' play has improved as the season has gone on and his knee injury becomes less of an issue. Calvin Johnson has seen 12 or more targets in every game in the past four weeks, so Revis will undoubtedly get tested.

Advantage: Lions +1.5. I do think the Lions are a bit overrated when it comes to their passing offense, but the Bucs aren't a huge threat to hold them down this week. I think it's fair to assume the Lions will perform somewhere near their season averages. I can live with 310 yards and a 91 passer rating. 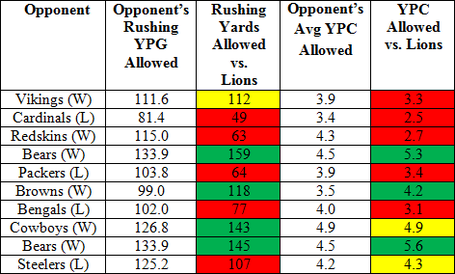 The Lions running game remains hard to figure out. One thing is clear: they are better now than they were at the beginning of the year. They have outgained averages in four of their last seven, while only being held below yards per carry averages once in their last five games. Still, it's pretty clear from the chart that they are an inconsistent unit.

One of the biggest issues in the running game has been fumbles. The Lions lead the league with 10 fumbles on the year. However, this week Reggie Bush promised he wouldn't fumble again, so I guess we can just forget about that issue. Problem solved. 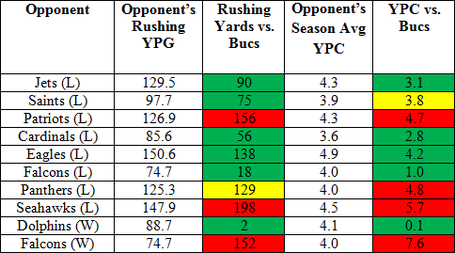 Overall, the Bucs have been a solid run defense in 2013. And, no, that isn't a typo, they really did hold the Dolphins to 2 rushing yards at 0.1 a carry. Only three of their opponents have significantly surpassed their yardage averages, while just four outgained their YPC average.

Player to watch: Gerald McCoy. This is a no-brainer. McCoy leads the team with 6 sacks, but his run defense is also stellar. He will give rookie Larry Warford quite the challenge this week.

Advantage: Bucs +0.5. It's hard to know which Lions run offense will show up on Sunday, but either way, they are going to have to work for those yards. One big factor will be Joique Bell's availability. Bell gives the team a power-running threat if Bush is having trouble making defenders miss. However, Bell aggravated his Achilles late in Pittsburgh and his status is unknown. 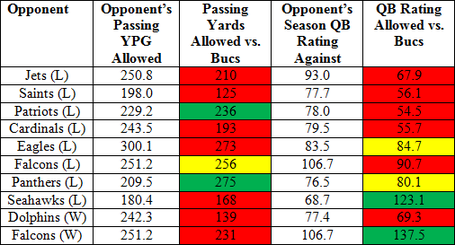 Before jumping into the chart, be aware the Mike Glennon's stats start in Week 4 against the Arizona Cardinals. While the Bucs' passing offense doesn't seem to be much of a threat, it is clear that since Glennon took over, they have been much better. During Glennon's reign, the Bucs have been held below passer rating averages in just three of seven games.

Rather than focus on the entire team's statistics, let's focus on Glennon. His passer rating of 87.7 ranks 14th among qualifying quarterbacks. Also, he has tallied 11 touchdowns and just 4 interceptions in seven games. But he is averaging only 6.2 yards per attempt (30th) and 219 yards per game (20th). Overall, Glennon has done a good job of being efficient and avoiding mistakes, but the Bucs haven't relied on him much.

The Lions have struggled lately from a lack of big plays. After tallying 10 interceptions through six games, they only have one in the past four.

Player to watch: Vincent Jackson. Jackson has over a third of the Bucs' receiving yards and targets this season. He has 500 yards more than any other receiver on the roster and has exactly half of the Bucs' receptions of 20+ yards. So... stop Jackson, stop the Bucs.

Advantage: Bucs +0.5. The Bucs haven't dominated a team through the air yet this season, having never thrown for 300 yards in a game this year. However, Glennon has given them stability and efficiency. Meanwhile, the Lions defense is struggling against almost everyone. They may get Bill Bentley back this week, but Detroit's issues go beyond their starting nickel cornerback. 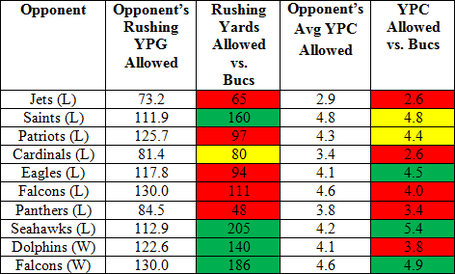 After Doug Martin went down in October (against the Falcons), it seemed like the Bucs running game would only get worse. Strangely, the opposite has happened. The combination of mid-season acquisition Bobby Rainey and rookie Mike James has given Tampa a new dimension in the past four weeks. Last week, Rainey, alone, carried the ball 30 times and gained 163 yards and 2 rushing touchdowns. Of course, some of their success has to do with their past three opponents, none of which are particularly good against the run. Still, Tampa's run game looks to be on the rise. 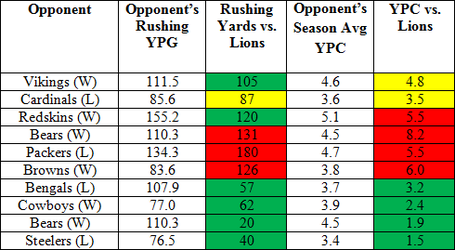 The Lions' dominance on the ground continued for another week. In the past four weeks, the Lions have allowed just 2.2 a carry. No team has come near their yardage or yards per carry averages since Week 6.

Overall, the raw stats are beginning to improve as well. The Lions rank t-12th in yards per carry (4.1) and are only giving up first downs on 15.7% of their opponent's rushes (second-best).

Player to watch: DeAndre Levy. I've ignored Levy for too long in this column. He leads the team in both tackles and tackles for loss. He has been especially good against misdirection runs, which had killed the Lions earlier in the season.

Advantage: Lions +0.5. The Bucs running game looks like it has turned a corner, but they'll need to do it for more than three weeks to have me fully convinced. The Lions, on the other hand, have been the completely dominant defense we thought they were capable of being earlier in the season.

Momentum? I personally don't really believe in team momentum, especially on a week-to-week basis. But if it does exist, the Buccaneers have it. Their two-game winning streak has the team believing they can win, despite starting the season 0-8.

Last week, "On Paper" suffered its worst loss of the season, predicting a 10-point Lions victory only to see Detroit lose by that exact margin. That brings On Paper's total record to 7-3 on the year. In the comment section, only two PODers predicted a Steelers victory. David Tokarz was slightly closer in the actual game score with his 20-17 prediction. Here is your prize, David: 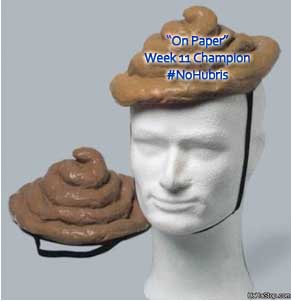 The Lions come out with just a +1 advantage. You can call this a trap game, a litmus test, a must-win or whatever cliché you'd like, but this game scares me. The Bucs are nowhere near as bad as their record shows, and their offense is trending upward in both the passing and rushing attack. Even in their losses, they have been extremely competitive. Four of their losses were by 3 points or less.

Still, the Lions have more talent, more to play for and they are at home. It won't be an easy win, and I don't think they beat the spread, but they still should win. Lions 24, Buccaneers 23.