A look at how the Tampa Bay Buccaneers keep plugging in running backs and having success.

The week-to-week reality of the NFL is a fickle mistress. A few games ago, I wouldn't have expected the Tampa Bay Buccaneers to be the team entering this Sunday's game on a win streak. I suppose it's not as surprising as it seems, though -- this is a team that went blow-for-blow with the Seattle Seahawks and the New Orleans Saints earlier in the year, so it's not as though the Bucs had been getting embarrassed on the field during their losing streak.

Off the field was another story. The past year and a half has shown that the Greg Schiano locker room produces four things:

(Seriously though, I had a regular, non-antibiotic-resistant staph infection in my throat when I was a kid. It was two weeks of hell, and it doesn't even hold a candle to what Carl Nicks and Lawrence Tynes have dealt with. Scary stuff. Just don't ask Coach Schiano about it.)

It really is kind of amazing to see how Tampa Bay has stayed productive in the run game despite the rash of RB injuries they've suffered. The Bucs' defense has been formidable all season, and recently their offense has started to contribute as well. Jim Schwartz knows where that comes from:

"Particularly that key over the last few weeks [for QB Mike Glennon] is if they run the ball very well and it's a big matchup in the game...Their ability, they've plugged in a lot of different running backs...That's big a matchup in this game...They do just about everything in the book. They attack the outside, they attack the inside. That's been a key for those guys."

(Side note: When I started writing these, I was looking forward to awesome quotes by Gunther Cunningham about which player he was fetishizing each week. Instead, it's been a season's worth of Schwartz's actual coach speak, which is irrelevant and uninformative. But, in the interest of the column name, I'll keep up appearances.)

Doug Martin's talent was no secret, and a drop-off in production was reasonable to expect after he went out with a torn labrum. Instead, the Bucs actually became more productive. Mike James came out of nowhere and ran all over the Seattle defense (throwing a vintage Shaquille O'Neal "baby hook" touchdown pass in the process). Then, James went down with an ankle injury and the Bucs inserted Bobby Rainey, who couldn't beat out Willis McGahee and Chris Ogbonnaya for a roster spot with the Cleveland Browns two months ago. As I'm sure everyone expected, Rainey ran for 163 yards and scored 3 touchdowns last week against the Atlanta Falcons.

Clearly the Bucs are doing something right with their run blocking. Nick Fairley has noticed. So, what does Tampa Bay run that gives their running backs so much room to operate?

The Bucs employ a fullback in their offensive formations more than maybe any team in the league. The FB position may be more and more of an anachronism in today's NFL, but then again, so is Schiano. He's an old-school coach who is going to run hard-nosed schemes and ATTACK THE LINE OF SCRIMMAGE.

Victory formation antics aside, it works. And for those of us with fond memories of the Cory Schlesinger era, the Bucs' run scheme is enjoyable to watch. Let's take a look: 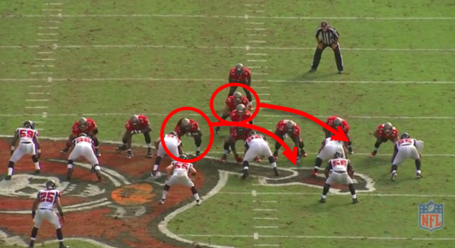 Here Tampa Bay lines up in the I formation, with two tight ends. This is a pretty standard look for them; a lot of their rushing success with Rainey -- and thus their play-action success -- against Atlanta came out of variations of the I. (They offset the FB a lot as well.) 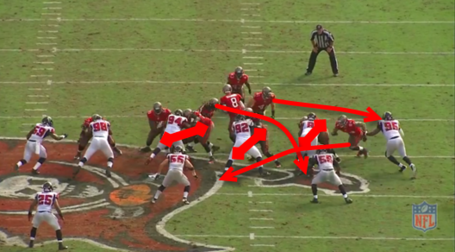 The Bucs run a "power" blocking scheme out of this look. Basically, the idea here is to get as many blockers as possible to the point of attack before the defense can compensate. The left side of the Bucs' offensive line (right side on your screen) blocks down on defenders. Meanwhile, the FB comes to kick out the outside LB, and the backside guard pulls to take out the inside LB. 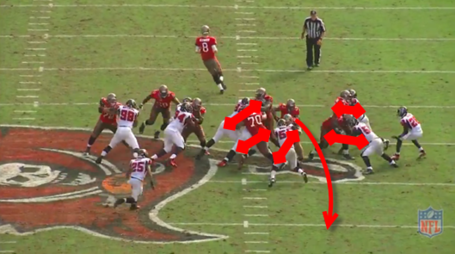 With all playside defenders accounted for, Rainey hits the hole and picks up an easy 9 yards. At one point, Tampa Bay ran power for three consecutive plays against Atlanta. Granted, they were ahead big at the time, but it's hard to ignore that trend, particularly when it works so well.

Tampa Bay's run game up the middle similarly relies on the fullback: 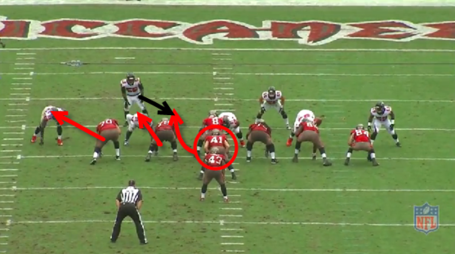 Again, the Bucs are in the I formation, this time with a single TE. The Bucs are going to run a FB iso off center to the left here. The left tackle takes on the OLB while the guard blocks the 3-technique over his outside shoulder. The center and the right guard double-team the 1-technique over the middle, leaving the fullback one-on-one with the playside linebacker. 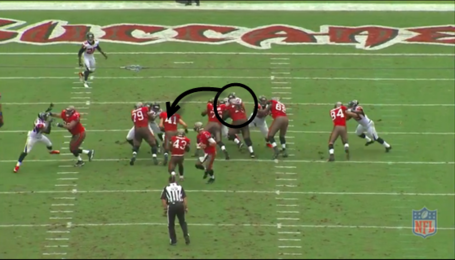 The play is blocked well, but Rainey actually ends up making this happen. Like Martin, Rainey is a short, compact RB (5'8, 212). Because of that size, he tends to get lost in the mix a little bit when he hits the line of scrimmage. As he gets to the hole, the backside ILB comes over to the fullback, expecting Rainey to follow him. 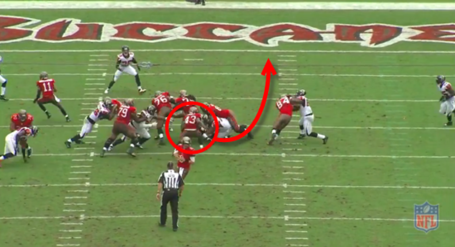 Instead, the ILB gets washed into the mix, and Rainey has an easy cutback (just look at that hole) for a 7-yard gain.

Rainey's not shy about cutting back across the play, and he has a quick step that lets him change direction faster than most linebackers. He gashed Atlanta on a number of cutbacks early in last week's game, and as a result, the Falcons' LBs became more hesitant to hit the hole. As it turns out, their adjustments didn't really matter. 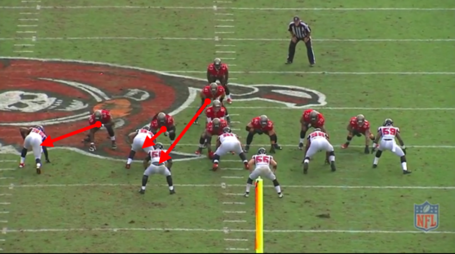 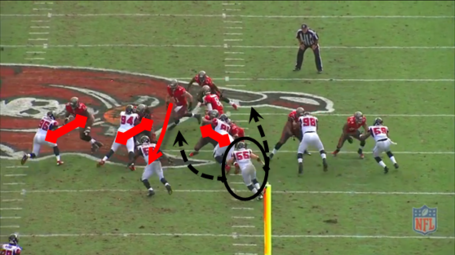 Again, Rainey follows his FB into the hole. The backside ILB (55), however, slows his pursuit to the hole in anticipation of the cutback. 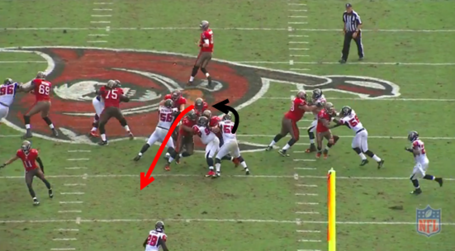 Rainey squirts out of the gap between his FB and LG while the backside LB accounts for the huge lane on his side. One missed tackle later, Rainey is in the open field, where he takes it 43 yards to pay dirt.

You can't really fault No. 55 here. I mean, look at that cutback lane. We can harp on gap integrity as much as we want, but at the end of the day, it doesn't matter if you can't get off your blocks. Tampa Bay punished Atlanta at the line of scrimmage last week. Rainey deserves some credit for their success. He slipped his fair share of tackles, but it seemed like every one of those attempts came 4 yards past the line of scrimmage.

Willie Young, Devin Taylor and Ziggy Ansah have all held their own against the run this season (to say nothing of DeAndre Levy and Stephen Tulloch's recent success), so you'd have to think this matchup plays to the Lions' strengths, given their recent success. If the contest becomes Mike Glennon versus the Lions, I like the Lions' chances. But to get to that point, the Lions are going to need to stand firm against the Greg Schiano power running game.