Will the Detroit Lions finally end their Thanksgiving losing streak against their division foe, the Green Bay Packers? Our preview has the answer.

The Detroit Scumbags Lions (6-5) will try to end their two-game skid as the Green Bay Packers (5-5-1) come to town on Thanksgiving Day. The Packers are trending the wrong way as well, going winless in their last four games. However, both teams have a huge opportunity this week to take control of the NFC North. A Lions win pushes Green Bay 1.5 games behind and evens up the primary tiebreaker, while a Packers win would result in Green Bay jumping the Lions in the standings and locking in the tiebreaker between the two teams. Of course, with the Packers' tie last week, it's unlikely tiebreakers will even be a factor going forward.

Though the Lions haven't won on Thanksgiving since 2003 and they've lost 14 of the last 15 games against the Packers, they are favored in this game by six points. Let's consult the charts to see what's really going on. 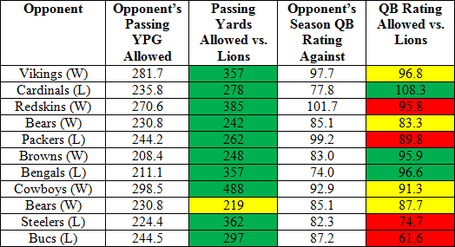 Detroit's pass offense continues to slide and be the main cause of the Lions' recent problems. After only being held below passer ratings just twice in their first seven games, they haven't surpassed averages in four.

Through five weeks, Matthew Stafford had thrown just 3 interceptions and completed 63.8% of his passes. But in the last six games he's thrown 9 interceptions and is completing just 55.4% of his throws. There doesn't seem to be any rhyme or reason for this turnaround, as the offense has remained healthy and the strength of the opponent's defense doesn't appear to have changed much. I believe the main culprit in this drastic change is simply Stafford's inconsistency, which has been lingering his entire professional career.

Overall, the statistics still point to a well above-average offense. Detroit ranks 11th in passer rating (89.0), t-seventh in yards per attempt (7.5) and has given up the fewest sacks in the entire league (14). 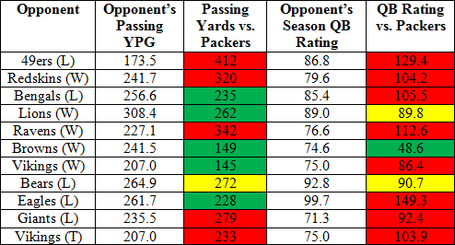 The Packers pass defense has struggled all year. They've held just one opponent significantly below their passer rating average, while holding about half below their yardage average.

They rank 27th in passer rating allowed (99.2), 26th in yards per attempt allowed (7.8) and 21st in completion percentage allowed (62.2%). For reference, all three of those rankings are worse than the Lions pass defense.

However, the Packers are tied for the most sacks in the league with 37. Strangely, that pressure has not led to forcing interceptions, as Green Bay has only 4 picks on the season, the fewest in the league.

Player to watch: Clay Matthews. After coming back from a thumb injury, Matthews has already made his return known. Last week, he tallied 2 more sacks to his season-long total of 6.

Advantage: Lions +2. Despite their recent struggles, the Lions still have a big advantage in this matchup. If the Lions can limit their mistakes to just one or two turnovers (or maybe even 0!), they'll likely be able to move the ball efficiently through the air. They have too many weapons not to. 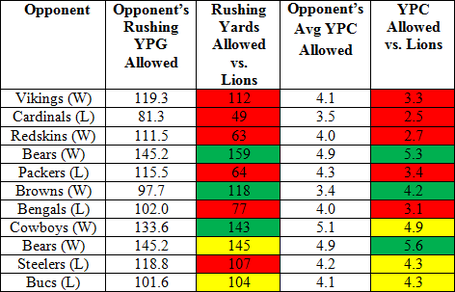 The Lions run offense has been good enough in the past few weeks. They've only been held below yardage averages twice in six weeks and yards per carry averages once. They've also run for 100+ yards in six of the last eight games.

Overall, the raw statistics are a little less impressive. They rank 18th in yards per carry (4.0). But the stat I keep bringing up is first down percentage, where the Lions rank sixth. The Lions may not be a dominant running team, but they are fairly efficient, gaining first downs on 24.4% of rushes. 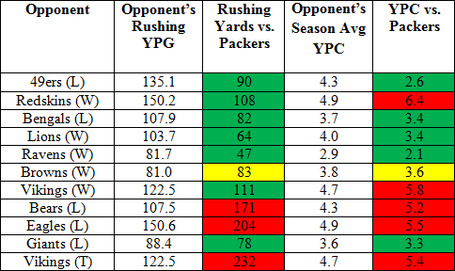 After a dominant first half of the season, the Packers have begun to struggle against the run. They have only held one of their past six opponents significantly below yards per carry averages, while holding just two during that span below yardage averages.

Player to watch: Reggie Bush. Bush has been inconsistent all year, but he is still among the league leaders in most rushing stats. He ranks 10th in rushing yards (737) and ninth in yards per carry (4.6).

Advantage: Lions +0.5. Though they failed to reach averages against the Packers last time the two faced, the Lions run offense has slightly improved since, while the Packers run defense seems to be faltering. I don't expect the Lions to dominate on the ground, but 120 yards and 4.3 a carry seems like a realistic outcome. 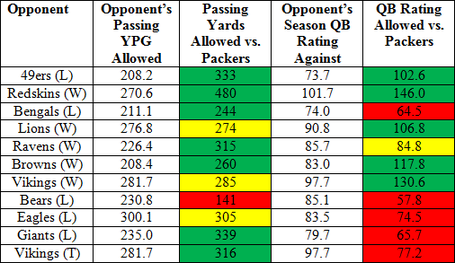 Let's play the easiest game in the world: find the spot on the chart where Aaron Rodgers got injured. If you answered: "where it got all red and stuff," you're a winner!

It looks like Rodgers will be out once again this week, and in will step the man of my intermittent nightmares, Matt Flynn. Flynn saw the field last week for the first time since Week 4, when he was with the Oakland Raiders. Flynn was adequate last week, going 21 for 36 for 218 yards, 1 TD and 0 INTs.

The Packers remain highly ranked overall, but mostly because of Rodgers' work. They are seventh in passer rating (94.1), sixth in yards per attempt (8.2) and fifth in completion percentage (64.8%). 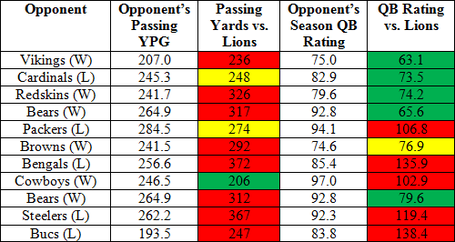 Ugh. The Lions pass defense remains the most disappointing unit on the team. They've only held one opponent below yardage and passer rating averages in seven games.

The biggest issue for the pass defense has been their tendency to give up big plays. They have allowed 12 pass plays of 40+ yards, which is tied for the third-most in the league. Additionally, they rank t-23rd in yards per attempt (7.7), 20th in passer rating allowed (90.8) and 17th in completion percentage allowed (60.9%).

Advantage: Packers +1. I know everyone has been envisioning the last time Flynn faced the Lions (480 yards, 6 TDs). And while the Lions pass defense hasn't been anything close to inspiring as of late, Green Bay is so unbelievably beat up on offense that I can't see them absolutely dominating this matchup. That being said, I do expect Flynn to be somewhat successful on Thursday. 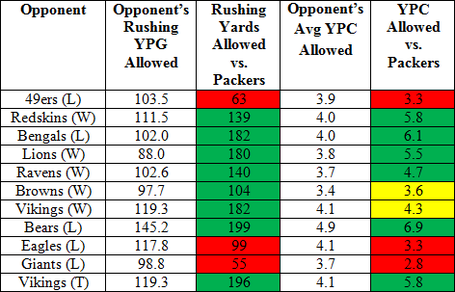 The Packers run offense has been a pleasant surprise for the residents of Green Bay. They have surpassed defensive averages in rush yards and yards per carry in all but three games this year. Of course, the running game has struggled a bit lately, likely because the threat of the pass has been diminished with Rodgers' absence.

However, Green Bay remains a solid rushing team. They rank fourth in yards per carry (4.8), first in first down percentage (26.3%) and t-sixth in rushing touchdowns. 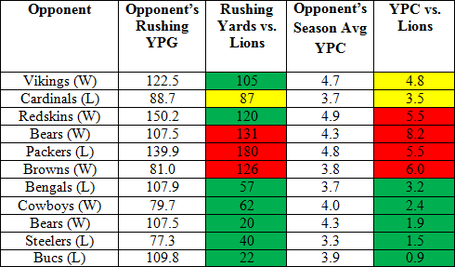 Detroit's run defense has been downright dominant lately. They have held their past five opponents well below their rushing yards and yards per carry averages. The longest rush they've allowed during that span is 13 yards.

Overall, the Lions' statistics are now extremely impressive. They are allowing only 3.8 yards per carry (t-seventh), and opponents are gaining first downs on only 14.6% of their rushes (second-best).

Player to watch: Eddie Lacy. As broken down by Eric Shinabarger, Lacy has been a force in his rookie season. Despite missing two games with a concussion, Lacy ranks eighth in rushing yards (806) and rushing touchdowns (6).

Advantage: Draw. This is by far the most intriguing matchup of the game. Both teams sport top-10 units, and the Packers will likely try to rely on their running game with Flynn behind center. I expect the Packers to be somewhat successful through the air, which may open up the running game. But if the past five Lions games are any sign, that may not make a difference.

Bulletin Board material. As if there wasn't enough motivation for the Lions on Thanksgiving, Packers guard Josh Sitton added fuel to the fire by calling the Lions defensive line a bunch of "scumbags" (which is an inspired term to use). Whether the Lions use those words as motivation to play better or become more undisciplined remains to be seen.

Dominant history. As mentioned in the opening, the Packers have won 14 of the past 15 matchups between the two teams. That sort of dominance has to be lingering in the back of every Lions player's mind.

On Paper's record fell to 7-4 last week, as Detroit lost a game they should have statistically won. In my defense, I did claim that the game "scares me," and my prediction of 24-23 was very close to the actual 21-24 score.

However, my prediction was bested by Pride Of Detroit's resident curmudgeon, joshsun, who predicted a 23-19 defeat. Here's your holiday-inspired prize: a variety pack of Tofurky products! 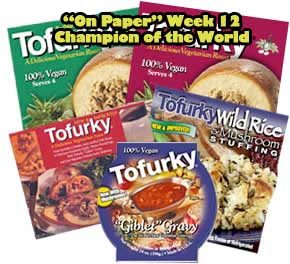 The Lions end up with a +1.5 advantage. I think Green Bay presents a good matchup for the Lions. The Packers' biggest strength (run offense) happens to be matched up with Detroit's best unit (run defense). And while the Lions have been struggling against the pass, they are fortunate to be facing a quarterback who wasn't even with the Packers three weeks ago.

Meanwhile, the Packers don't have a very good defense, and despite Stafford's recent struggles, all signs point to him recovering this week against one of the worst pass defenses in the league. It's time to finally eat some turkey without the extra glaze of tears: Lions 31, Packers 24.