With a short week, here are some short thoughts about Matt Flynn and how the Detroit Lions might get after him on Thanksgiving.

Share All sharing options for: CoachSpeak: Matt Flynn and the Lions' pass rush

If things had gone as planned over the past two weeks, Thursday's game would not be a must-win. Things have obviously not gone as planned. Instead, the Green Bay Packers are coming to town, fresh off an electrifying comeback tie against the Minnesota Vikings last week, led by erstwhile backup Matt Flynn. What did Flynn do to drive that comeback, coach Jim Schwartz?

"Ran their offense. I think that's probably the key. They're going to run their offense regardless of who the quarterback is. Flynn's a veteran quarterback. He knows where to go with the ball and he'll give us a challenge the same way that Rodgers would."

The prodigal son returns! Sacrifice the fattened calf in Green Bay! As ridiculous as it is to liken Flynn to Aaron Rodgers, I can't entirely disagree with Schwartz here -- Flynn has, historically, given the Lions a challenge.

Assuming things progress as planned, the Lions will be seeing Flynn on the field of play once again on Thursday. A significant percentage of Flynn's career throws have been against the Lions, so if anyone should know what to expect, it's them. Trying to analyze Flynn is a bit difficult; working against us is the fact that Flynn has only accumulated about four or five games' worth of stats over his career. So, with a short week and little numbers, let's make some broad generalizations about Flynn and how the Lions might come after him.

For starters, Flynn won't be playing at Lambeau Field, where he magically turns into a remarkably better quarterback than he is anywhere else. Again, we don't have a ton of data to work with (which is more damning of Flynn than anything else), but over his six-year career, Flynn's completion percentage and yards per attempt jump by 19 points and 1.6 yards, respectively, whenever he plays in that accursed temple to the northwest.

Flynn gets plenty of credit for the Packers' comeback last week -- much of it deserved -- but one area where he struggled was against the blitz. Against added pressure, Flynn completed 5 of 12 passes for 69 yards against the Vikings. Not dreadful, but certainly worse than the 16 for 24 he went against a standard pass rush.

In that regard, Flynn and the Packers should have little to worry about -- the Lions bring added pressure less frequently than any team in the league. Recently, though, there are signs things might be changing. After blitzing Ben Roethlisberger only three times two weeks ago (by my count), the Lions brought at least one extra rusher on 33 percent of Mike Glennon's dropbacks last week. Against those plays, Glennon went 4 for 7 for 36 yards and 1 TD, with 1 sack. Glennon certainly made them pay at times; he is an NFL quarterback, after all, and part of the job is making plays. But if the Lions' cornerbacks can't cover -- and recent signs have indicated as much -- then perhaps it's time to start considering giving Detroit's incredible front four some help.

So, with that in mind, what packages were effective against Tampa Bay last week?

When the Lions bring a blitz from the secondary, Glover Quin seems like the man for the job. Granted, I'd almost rather see a corner blitz since I have more faith in Quin's coverage skills than the Lions' CBs at this point, but GQ is quick on the pass rush and evades running backs seemingly every time he comes after the quarterback. 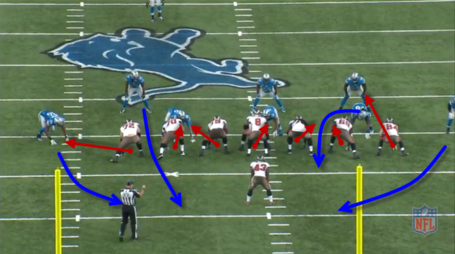 Here the Lions isolate Ziggy Ansah out wide on the left, with Willie Young lined up as the 5-technique over the right tackle's outside shoulder. (This is that half-wide 9 we talked about way back at the beginning of the season.) Quin is the player cut in half vertically on the right side of the screen. The Lions are going to bring six on the pass rush, with Quin coming around the edge and DeAndre Levy shooting the C gap. 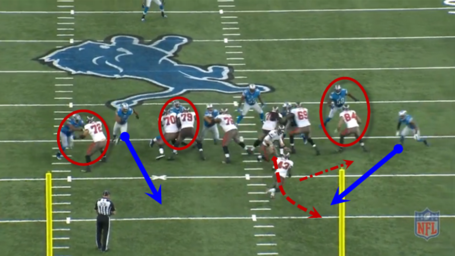 At the snap, Willie Young crashes down inside, drawing the attention of the guard and tackle, while the tight end moves out to block Ashlee Palmer. Nick Fairley draws the double team on the left side, while the wide rush of Ansah leaves the C gap open for Levy's blitz. Either Quin or Levy is in a good spot to make a play here, but as it happens, the play fake comes directly at Quin. 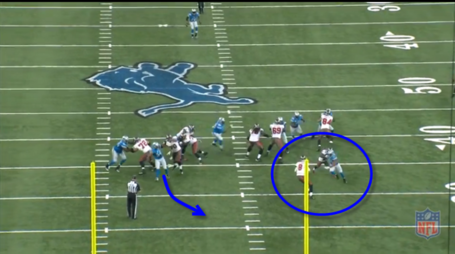 Levy gets held up a bit by the tackle, who leaves the double-team to compensate for the blitzing LB. Bobby Rainey tries and fails to block Quin, who shoots around him with ease and ends up making the sack for a loss.

The Lions opted to send Levy after Glennon quite a bit last week (by their standards, anyway). Like with Quin, I have my concerns about sending arguably the defense's most reliable coverage man on the blitz, but as is his style this season, Levy made plays when he came after Glennon. 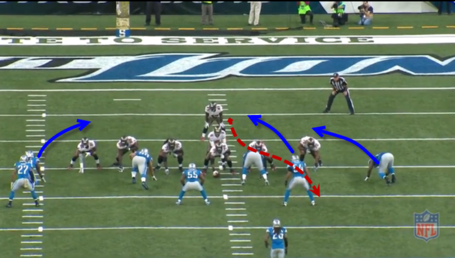 Both Young and Ansah are lined up wide before the snap, with Levy staying back to avoid tipping his hand. The Bucs are set to run a screen pass to Rainey out of the backfield. 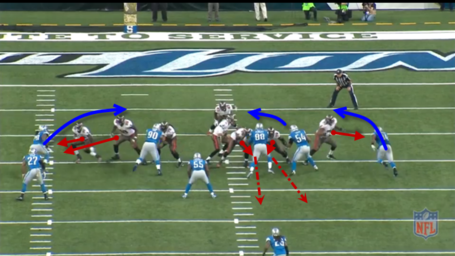 At the snap, Ansah draws the attention of the left tackle, and Fairley gets double-teamed, leaving the B gap wide open for Levy, who comes unabated to Glennon. 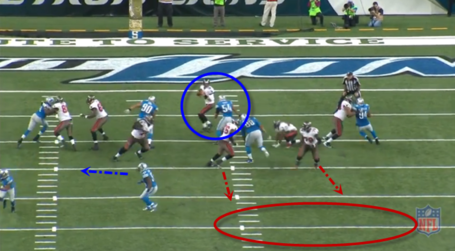 If not for excellent pressure by Levy and a stumble by Rainey (also slightly due to Levy), the screen probably would have gone for big yardage (check out Stephen Tulloch and the available space to the right). But it pays to guess right, and Levy forces a low pass to Rainey that falls incomplete.

The Lions' front four is able to get after the quarterback as well as any unit in the NFL, as evidenced by their total quarterback pressures. But as the pass coverage continues to deteriorate, the pass rush has to become even more formidable. If your corners can only cover for a few seconds, someone needs to be in the quarterback's face by then.

Of course, if you do anything often enough in the NFL, opposing teams will find a way to exploit it, so the Lions can't start just sending added pressure on every play. But neither should they entirely avoid it, like they have been for most of the season. Blitzing is obviously a matter of calculated risk, but you could say the same about letting the Lions defense sit back in coverage these days. One of Flynn's better qualities is his accuracy, and if the Lions are going to come out of Thanksgiving with a win and a division lead, they need to disrupt that accuracy.