Film review: Are the Bears planning a trick play?

Looking through the tape of the Chicago Bears vs. Green Bay Packers game, an odd tendency showed up with the Bears' special teams unit.

Share All sharing options for: Film review: Are the Bears planning a trick play?

This week, having no Detroit Lions game to review, I decided to go a-scouting. I wanted to go back to the Monday Night Football game between the Green Bay Packers and the Chicago Bears to find some sort of weakness or exploit some secret in the Bears' game plan. It didn't take long into the film for me to find something quite strange... and a bit frightening. On every single kickoff return, the Bears threatened to run a trick play. 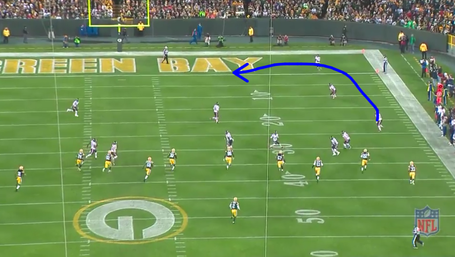 The play design is neither complicated nor original. The widest man simply runs back when Devin Hester catches the ball, and he runs in the opposite direction. The play basically works the same way a reverse or an end-around would. Hester gets the coverage team to all run in one direction, while the "reverse" man potentially takes it in the other. 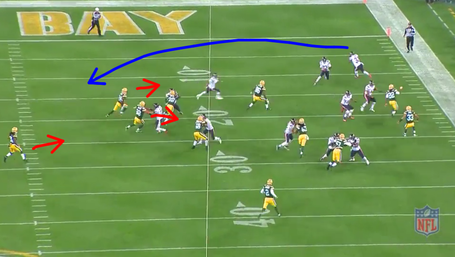 As you can see, even the widest Packers coverage men have all their momentum flowing toward Hester. This can leave a huge gap on the opposite side of the field for the reverse guy.

But there is another wrinkle in this play. The Bears never gave the ball to the guy running the reverse. Even though they ran this play on literally every kickoff, Hester held on to the ball in every situation. Why? 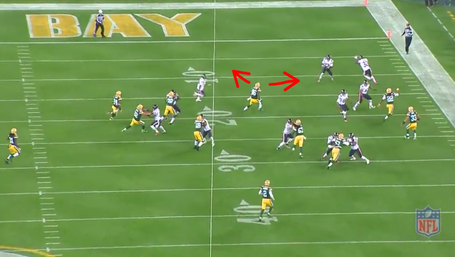 Look at the closest unblocked Packer above. He sees the potential reverse and hesitates to see what Hester will do. That slight hesitation is enough to open up a hole for Hester. 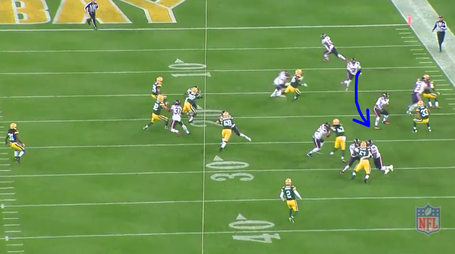 So how do you defend it? Well, there are a few different ways. First and foremost, the man on the side of the reverse needs to stay disciplined. If he gets sucked in by the temptation of Hester, he's going to leave the team extremely vulnerable if the Bears ever decide to run a reverse. See below: 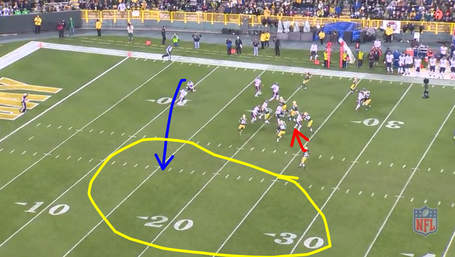 Other solutions are much simpler. Sam Martin could just boot the ball out of the end zone on every kickoff. The only problem with this is that weather conditions at Soldier Field may make this difficult. Also, Hester likes to return every ball he can. So even if Martin kicks it 7 yards deep into the end zone, Hester will likely try and run it out.

The other solution would be to kick it away from Hester. The Washington Redskins did this on nearly every one of their kickoffs against Chicago. Hester only had 2 returns out of 7 kickoffs in that game, and no player had a return longer than 28 yards. However, this strategy can be dangerous because it requires a shorter kick, giving up valuable field position. Still, letting the Bears start on the 30+ yard line may be better than rolling the dice with Hester.

But, overall, something is very fishy about all of this. I went back and watched every single Bears kick return from this season. They had never run this fake reverse once before Monday night. This all screams manipulation. The Bears don't run this trick play all season, then pull out this look on national television with every team watching? In addition, the Bears were extremely overt in their presentation of the play. The players exaggerated their motions on the fake, and the Bears dialed it up on every single kickoff. It seems to me like they were trying to show this play off to the NFL, trying to instill that fear in special teams coordinators across the league, trying to make special teams players hesitate for just one extra second, giving Devin Hester all the room he needs to break one.

While the Lions obviously need to prepare for the possibility of this trick play, they can't forget about the threat the Bears pose in just having Hester back there. The best way to avoid all of this? Kick it away from him. Either boom it through the end zone or semi-squib it to someone else. Make this threat entirely moot.