Our statistical preview breaks down the Detroit Lions' matchup with the Chicago Bears and predicts which team will come out as the NFC North division leader.

Share All sharing options for: On Paper: Detroit Lions at Chicago Bears

The DIVISION LEADING DETROIT LIONS (!!!!!!!!!) head to Soldier Field this week to face the Chicago Bears. The Bears are coming off their biggest win of the season against the Green Bay Packers at Lambeau. The Lions are fresh off their bye week.

The rivalry between these two teams has heated up in the past few years and may reach its pinnacle this week. The winner of this game will have at least a share of the division lead, with the Lions having the potential of a two-game lead over the Bears (with the tiebreaker between the two sealed with a Detroit victory). This is easily the biggest game for both teams this season, so expect them to be extremely focused and intense. But emotions aside, which team has the statistical advantage? Let us consult the DIVISION LEADING charts:

Detroit's passing offense chart continues to look quite impressive. They've now met or surpassed passing yard averages in every single game, while only failing to do so twice in terms of passer rating. Matthew Stafford continues to have his most consistently good season, having not dropped below an 83 passer rating yet. He is also well above his career averages in completion percentage, yards per attempt and quarterback rating. Oh, and he's also A MAN.

In league rankings, the Lions land eighth in passer rating (94.7), ninth in yards per attempt (7.7) and 13th in completion percentage (62.4%). Although it doesn't seem like the Lions throw it downfield as much as they used to, they actually have the third-most pass plays of 40+ yards in the league (9).

The Lions also have this guy. Calvin Johnson ranks first in the league in receiving yards per game, t-fifth in receiving touchdowns and eighth in yards per reception. However, in their last matchup, Johnson only managed 44 yards and a touchdown against the Bears.

...which leads us to the Bears pass defense. It has been inconsistent all year. Perhaps the most significant part of this chart is that they held the Lions to season lows in both passing yards and passer rating when the two teams met in Detroit in late September. Still, nearly half of their opponents have met or surpassed averages in yardage and passer rating against the Bears defense.

Overall, the Bears rank 19th in passer rating allowed (88.5.), 24th in completion percentage allowed (65.6%) and, strangely, tied for last in yards per attempt allowed (8.5). A little digging shows that the Bears are susceptible to big plays through the air. They have allowed the fourth-most pass plays of 20+ yards in the league despite facing the fourth-fewest passing attempts.

Despite those poor stats, this defense is still very disruptive. They are tied for ninth in interceptions (11), and they are first in the league in forced fumbles (17).

Player to watch: Charles Tillman. Tillman seems to be the only cornerback to have Johnson's number. In his past four games against the Bears, Calvin is averaging less than 58 yards per game, and he only has 1 touchdown.

Advantage: Lions +1.5. For whatever reason, the Bears always seem to give the Lions passing game a tough time. But this isn't a very good pass defense this year. The Bears' "good" performance against the Lions in the previous matchup is a bit of a mirage. The Lions took a 17-point lead into halftime and coasted for much of the second half. Their 35 passing attempts were the fewest all season. The Lions may get Nate Burleson back this week, which will only increase the Lions' clear advantage in the matchup. 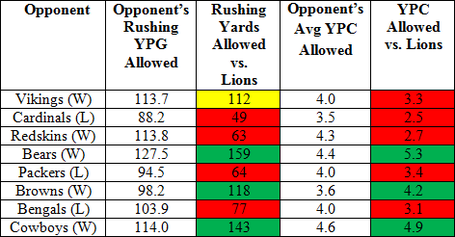 I still don't really know what to expect from the Lions run offense. In the past five games, they've flip-flopped between an impressive-looking rushing attack and the poor running game they've had for the past 10 years. They are still averaging just 3.8 a carry (t-20th), but they are also gaining first downs on 25.5% of their rushes, which is the fifth-most efficient in the league.

Reggie Bush had his best game (by a huge margin) against the Bears earlier in the year. Bush tallied 139 yards on the ground at 7.7 carry and scored a glorious touchdown.

Look at the hole James Starks had to run through. pic.twitter.com/gvSHFRyMOP

The Bears are giving up 4.4 yards a carry, which puts them at t-22nd in the league. They are also allowing a first down on a league-high 27.2% of rushes. This is not the Bears defense of old. The loss of Lance Briggs has been especially damaging to the Bears. Briggs leads the team with 64 total tackles and 8 tackles for loss, despite missing the last five quarters due to a shoulder injury. In the last matchup, Briggs had 13 total tackles. They are going to miss him this week.

Player to watch: Bush. Reggie dominated this matchup last time, and there's no real reason to believe he can't do it again. If he gets anywhere near the space that James Starks and Eddie Lacy got last week, the Bears are in big trouble.

Advantage: Lions +1.5. Detroit is still too inconsistent for me to give them a dominant advantage in this matchup. But with Briggs out for another month, there's no reason why the Lions shouldn't tally at least 100 rushing yards against the Bears this week.

The Bears pass offense has seen a similar consistency to the Lions pass offense. Jay Cutler and the gang have only dropped below an 84 passer rating once this season (against the Lions).

Chicago ranks ninth in passer rating (93.5), 11th in completion percentage (63.6%) and t-11th in yards per attempt (7.5). Astute readers will notice that all three of those rankings are within two spots of the Lions' pass rankings. Indeed, I think it's a fair comparison between the two units. The only major difference is the Lions attempt around 7 more passes per game.

The Lions pass defense appears to have taken a nosedive in the past few weeks. After holding three of their first four opponents below passer rating averages, they have yet to do so once in the past four games. In terms of yardage, the Lions are forfeiting a lot of field against their opponents. The defense remains heavily reliant on turnovers for success, tallying 9 interceptions in their five wins, while only managing 1 interception in their three losses.

At this point, it's fair to call the Lions pass defense slightly below average.

Player to watch: Alshon Jeffery. Jeffery has emerged as much more than a No. 2 option to Brandon Marshall. He's really much more of a 1B to Marshall's 1A. Jeffery is averaging 103.4 yards per game in his last five and has 3 touchdowns over that span.

Advantage: Bears +1.5. This matchup is strikingly similar to the Lions pass offense vs. the Bears pass defense. Though Chicago isn't as reliant on their passing game as the Lions are, they seem to be equally as efficient. And both teams' pass defenses seem pretty porous, but both are also capable of creating game-changing turnovers. It's worth noting that despite coming off their bye week, the Lions will likely be without two players on defense: Ziggy Ansah and Bill Bentley. This likely means we will see a fair share of Darius Slay on the field, which... *gulp*. 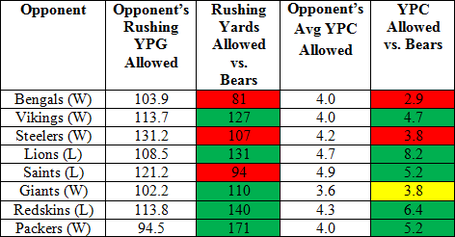 The Bears running game has really turned it on since the last time these two teams met. Overall, the Bears have been held below yardage averages three times this season and only twice in yards per carry averages.

The Lions run defense looks like it may have finally rebounded. After a terrible streak of games, the Lions have held their last two opponents well below their rushing averages.

However, the Lions continue to be punished by the long run. They have still allowed the most runs of 40+ yards in the league (4). It's worth noting that two of those rushes came against wide receivers, which is important, because Jeffery had a 27-yard rush against the Lions earlier in the season. Of course, Forte also had a 53-yard touchdown in that game.

But long rushes aside, the Lions are clearly improving in this facet of the game. They are allowing first downs on just 16.9% of rushes, which ranks them third best.

Player to watch: Ndamukong Suh. According to Pro Football Focus, Suh dominated his matchup with rookie Kyle Long in September. A repeat performance could stop Forte before he has a change to get going.

Advantage: Bears +1. While the Lions defense looks to be righting the ship, their propensity to give up big rushing plays could be extremely damaging this week. Forte is tied for the sixth-most rushes of 20+ yards, and Jeffery is also a running threat. I don't think the Bears will be able to run consistently against the Lions, but there's a huge possibility that they break off a big run or two... or three.

Bye week vs. short week. The Lions will be coming into Chicago well rested and fairly healthy. Meanwhile, the Bears are coming off a short week and are missing their best linebacker and sporting a quarterback who can't possibly be 100% with his groin injury.

Soldier Field. Soldier Field has been as huge source of frustration for the Lions in the past. They haven't won there since 2007. And the field condition always seems to have some sort hand in their demise. I predict at least three "ARGGGG"-inducing Reggie Bush slips.

I predicted a Lions victory over the Dallas Cowboys, 34-31. Thanks to heroics from our falsetto-voiced quarterback, my prediction turned out pretty close to the 31-30 final score. My prediction was only bested by Pride Of Detroiters DLions4Eva and rames' predictions of 30-28 and 34-30, respectively.

The Lions end up with just a +0.5 advantage. A lot of talk has been made of Cutler's injury and whether he will truly be ready to start against the Lions. However, I think the bigger injury is Briggs'. Briggs was the leader of that defense, and quite possibly, their best player on that side of the ball. Without him, the Lions have a huge opportunity to get the running game open. If the Lions are able to stay that balanced on offense, they may be unstoppable against a subpar Bears defense. Lions 27, Bears 23.